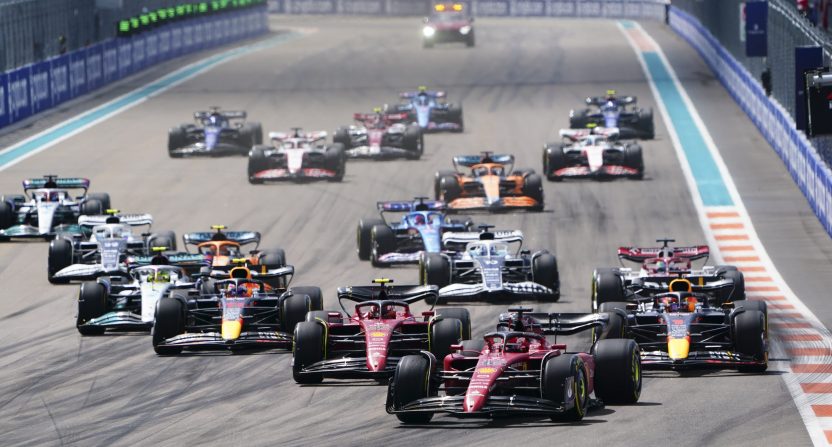 Formula 1 is getting a new TV rights deal in the United States and thanks to the sudden popularity of the sport, the demand to obtain the rights is at its highest. Four bidders are reportedly in the running for the series in a deal that F1 owners Liberty Media hopes will increase twentyfold.

According to Business Insider, current holders ESPN is going up against NBCUniversal, Amazon, and Netflix to take over Formula 1 coverage starting in 2023. Disney is reportedly currently paying $5 million per year to air Formula 1 races in the United States and while they have put in a $70 million bid, Liberty Media is now seeking $100 million per year.

There is motivation from all four companies to invest in Formula 1. ESPN and Netflix deserve credit for the popularity of the series being so high. ESPN might not be paying much and using Sky Sports’ UK feed saves them some money but races have commercial free along with minimal commercials during practice and qualifying. That has cultivated a lot of goodwill from U.S. based F1 fans and with the plan to keep the broadcasts commercial free, most fans likely want to keep things as is.

Netflix doesn’t have live sports but they have been a big influence to Formula 1 with Drive to Survive. While the show is heavily dramatized, and it has rubbed some drivers the wrong way, the intrigue and conflict has served as an introduction to many new fans before they actually watch the races. While higher ups at Netflix have been talking about bidding for F1 rights over the past year, the company is in a bit of a transformation due to falling stock prices and a decline in subscribers. Given that, plus Apple and Amazon buying up sports rights, it makes sense to go after the sport they have the closest relationship with in order to begin their foray into live sports.

NBC makes sense for two reasons. One, the network had the rights in the four years before ESPN and it could be a nice way to cross-promote with their IndyCar coverage. Two, Comcast owns Sky Sports so instead of having a network rival borrow their UK feed, they can just cut out the middleman and seek to put it on their own network. Fans might be a bit worried given NBC’s reputation for having lots of commercials during their sports broadcasts.

Amazon is probably the biggest “outsider” of the four but they have been a bit of a hybrid between ESPN and Netflix. While they don’t have Formula 1, Amazon Prime has the rights to some New York Yankees games on YES as well as a handful of WNBA games, and a weekly NFL game on Thursday night. On the documentary side, Amazon might not have Drive to Survive but they were in the F1 docuseries space before Netflix with Grand Prix Driver and Fernando which followed McLaren and Fernando Alonso respectively.

Honestly, from my perspective, ESPN is in the pole position to retain rights. Unless Amazon and Netflix really blow the bank and offer crazy money, they’re fighting an uphill battle due to F1 TV. Liberty Media kept the OTT rights for their own streaming service that if a streaming service were to show races, that kind of defeats the purpose for F1 TV Pro, which costs $80 per year.

That leaves ESPN and NBC and it’s probably going to come down to cost. I feel like if ESPN matches Liberty Media’s asking price, they’ll stay. Both sides have got a great thing going and any rift could slow down progress. That being said, Liberty Media isn’t going to accept any deal and need ESPN to at least come close. Despite the rapid rise in cost, $100 million and minimal production costs is still a good bargain compared to other sports. Along with adding a race in Las Vegas, it’s a broadcasting deal that might be worth ESPN spending just a little bit more.