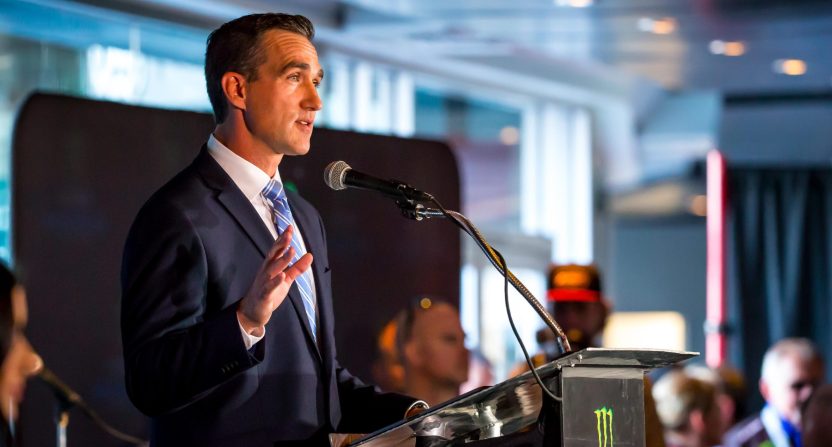 The SuperMotocross League announced its schedule and broadcasting team Tuesday. It will start with the supercross season opener from Angel Stadium in Anaheim, Calif., live on Saturday, Jan. 7, at 10 p.m. ET on Peacock and USA Network. An encore presentation will air the following day on Sunday, Jan. 8, on NBC at 2 p.m. ET and on CNBC at 1 a.m. ET. The 2023 pro motocross season begins with the Fox Raceway National in Pala, Calif., on Saturday, May 27, at 4 p.m. ET exclusively on Peacock. There are still going to be individual supercross and motocross championships, but the overall season will end with two playoff events and then the SuperMotocross World Championship Final, which will air live on Saturday, Oct. 14 on USA and Peacock. And they’ve put together quite a lineup of broadcasters; here’s more from a release on that.

Ahead of Tuesday’s schedule release, Dave Prater, vice president for supercross at Feld Entertainment, Inc (the SuperMotocross League parent company) spoke to AA on this new league launch and on their schedule. He said the combined league seemed like a logical evolution for these competitions:

“I think it was just the natural next step. Pro motocross is really where supercross gets its roots, 1974 when supercross was invented, it was first out of pro motocross. And it’s been really the same athletes, the same race teams that have been doing both championships for 50 years now, so it really was just the next step to bring the two sports together and collectively try to grow the sport as a whole.”

Prater said the combined season will be helpful from a storytelling perspective.

“In the past, we really told the stories in two separate chunks, very siloed. We would tell the supercross story and then when that was done, we closed the book, put it away and waited until next year, and then we’d start with the motocross story. This is really going to continue a story that fans can follow for the entire year. So that’s what I’m most excited about.”

Back in October, Feld Entertainment and NBC announced the creation of this league and that all races would be available live on Peacock. Prater said the consistency there will be be a boost for fans.

“It’s definitely easier. Obviously the fans know now that there’s one platform where they can go and watch all the races, all 31. In the past, that hasn’t been the case. …I think the unification under one network and one streaming platform, I think that’s just great for the fans. It’s going to make it easy. People will know where to go and when to watch it and how to watch it.”

And Prater said he’s thrilled with the announcing team they’ve put together.

“You can’t really get any better than Leigh Diffey and Ricky Carmichael. When it comes to supercross and motocross, Ricky is the GOAT. He’s been doing not only supercross but at least four or five motocross broadcasts. And then we’ve also got James Stewart, who’s an AMA Hall of Fame member just recently. We’ve got Jason Weigandt, who’s a long-time motocross play-by-play guy. So we really have a strong collective team that’s going to be used.”

Prater said it’s another benefit of the new league to combine some of that talent across the different events.

“And it’s not only now in supercross and then we have another team that does motocross. We’re going to cross-pollinate, for lack of a better term, some of that announcing talent throughout supercross and motocross, and then obviously the playoffs and the Supermotocross World Championship finals.”

For those new to supercross or motocross, Prater said both competitions are worth checking out, and this combined league may provide a way in for new fans.

“It’s the world’s most elite dirt bike racers. It’s action-packed. It’s kind of modern-day Evel Knievel. They’re the best in the world at what they do. And the two separate disciplines, one (supercross) inside a stadium, it’s tight, they have to be precise. And then one outside, it’s wide open, it’s endurance, and speed, and pure guts. It’s a spectacle, it’s the 20 best riders in the world.”

And here is the 2023 Pro Motocross Championship broadcast and streaming schedule:

Below is the inaugural SuperMotocross World Championship Playoffs and Final broadcast and streaming schedule: