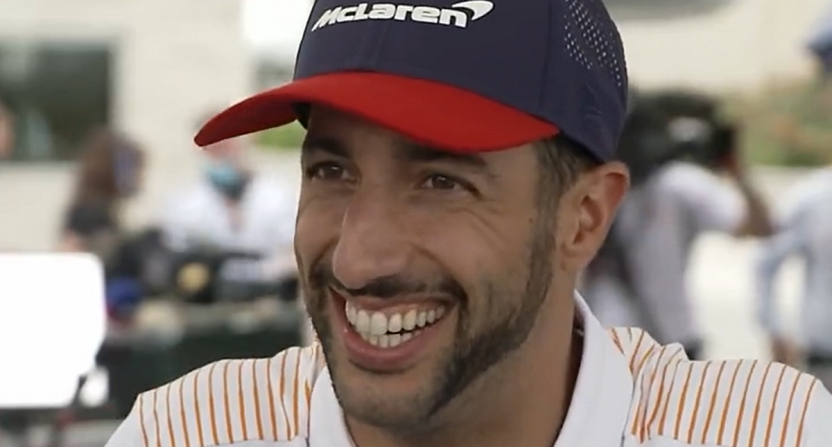 Formula 1 is in the United States this week for the first time since 2019, set for the U.S. Grand Prix at Austin’s Circuit of the Americas.

For driver Daniel Ricciardo, it’s a big week; the Australian is an unabashed lover of America, right down to choosing #3 in honor of Dale Earnhardt. Later in the weekend he’ll get to drive an old Dale Earnhardt car, the payoff to winning the Italian Grand Prix earlier in the season.

Ricciardo has gone full American (or full stereotypical American, although who can really differentiate anymore), right down to the outfit.

Ricciardo went above and beyond for an interview, though, attempting an American accent off the top and being goaded into keeping it up for the entire thing.

The accent? For the entire interview? ?

Listen, Ricciardo isn’t going to end up acting in a film any time soon with that voice work, but for an offhand comedy bit, it really delivers. It starts out sort of Kenneth from 30 Rock before transitioning into a sort of Ned Plimpton/Lightning McQueen Owen Wilson hybrid, although that visage is admittedly shattered when Ricciardo admits he can’t say “Wow.”

This man’s from Huntsville https://t.co/qupZ4SlUs9

Once those wheels touch down on Texan soil, everything changes. https://t.co/kD9RJBbOwk

The way Ricciardo’s debut season with McLaren has gone, he could end up anywhere from the podium to, like, 14th. But you can’t deny he’s having a lot of fun, nor can you deny he’s maybe the most American driver on the grid right now. If you needed further proof, please enjoy other drivers attempting to shoot a basketball before Ricciardo waltzes in at the end to show them what it’s like:

F1 practice coverage starts today at 12:25 on ESPN2. No word on if any other drivers will be attempting various American regional dialects, although if there’s any justice we’ll get Kimi doing an upper-Midwest Fargo voice.