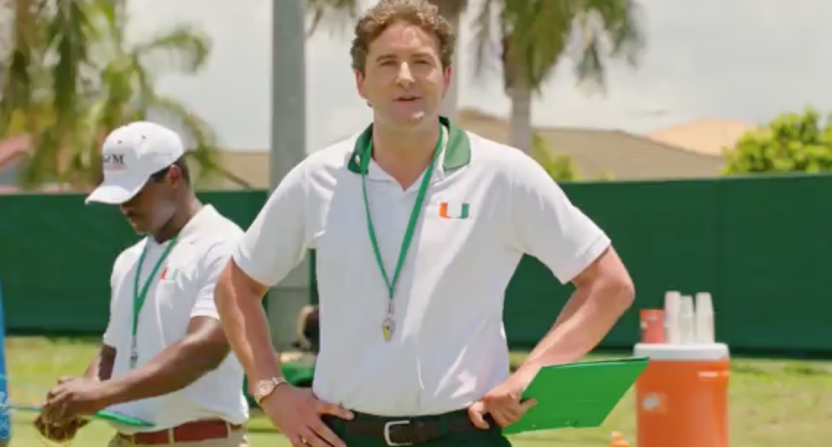 An intriguing part of Dwayne Johnson’s biography is that he played defensive tackle at the University of Miami during the Hurricanes’ glory years. Injuries prevented Johnson from fulfilling his potential and possibly taking his skills to the NFL, but those days are a key part of his story.

NBC’s Young Rock, a sitcom looking back at The Rock’s early years before he became a WWE superstar and global movie sensation, took us back to The U of 1990 for Johnson’s freshman year in its latest episode. (Episode 4, titled “Check Your Head,” if you’re keeping track.)

As many sports fans know, Miami football was quite a show beginning in the mid-1980s with players such as Michael Irvin, Vinny Testaverde, and Bennie Blades building the foundation, establishing expectations, and going on to success in the NFL. Those alums, along with celebrities like 2 Live Crew’s Luther Campbell, were regulars on the sidelines during practices and games.

Young Rock provided a glimpse of that with a scene showing one of Johnson’s early practices, which included fellow defensive lineman Russell Maryland and offensive lineman Mario Cristobal, now the head coach at Oregon. Setting the tone was defensive line coach Ed Orgeron (played by Emmett Skilton, who also appeared in the series’ pilot episode).

The “Oklahoma Drill” clashes between Johnson and Cristobal play a big role in the plot of “Check Your Head,” with Johnson suffering a serious shoulder injury that sidelined him during the 1990 season. That injury prevented Johnson from playing as a freshman, affected his desire to play, and put his college football career in jeopardy.

Young Coach O didn’t take it well when he found out that his freshman lineman was blowing off film sessions and left school before final exams to go home to Tampa.

Coach O finds out Dwayne Johnson has been skipping classes and film sessions at Miami ? pic.twitter.com/lzrM0pQsux

Skilton doesn’t quite get Oregeron’s thick Cajun accent right, though he had much more dialogue in this episode than in the pilot. (As Timothy Burke pointed out after that first episode, it would’ve been funnier if no one could understand what Orgeron was saying and subtitles were used.)

But he gets the growl down and portrays Orgeron’s booming presence well. And the running joke about Coach O chewing on coffee grounds, rather than drinking the brew, stays good for some chuckles.

The real Ed Orgeron appears at the end of the episode to say hello to his former player via video. The entire premise of Young Rock is that Johnson is running for president in the year 2032, sharing stories and lessons learned during interviews on the campaign trail.

So according to the show, TNT’s Kenny Smith will be hosting an interview show with famous athletes 11 years from now and Orgeron will still be the head coach at LSU. Maybe he’ll be the athletic director or school president by then. (Unfortunately, our clip cut off before Orgeron gave his signature sign-off, “Geaux Tigers.”)

If you missed it, you can stream Young Rock at NBC.com or watch On Demand through your cable provider. The series airs Tuesdays at 8 p.m. ET on NBC and is also available for streaming on Peacock, Hulu, and Google Play.