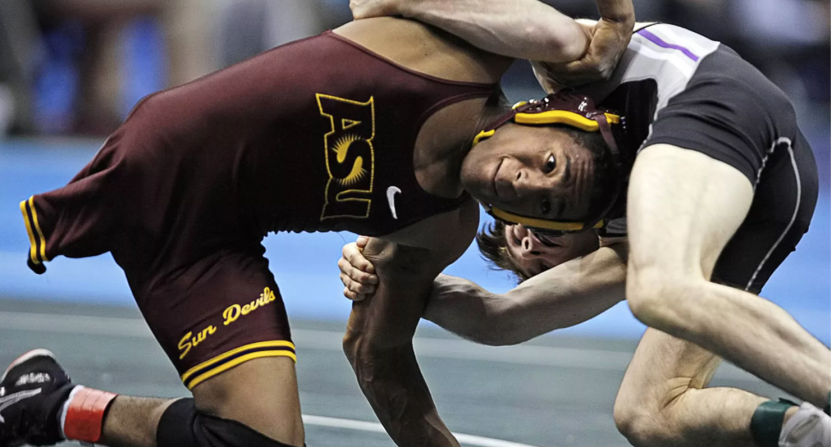 Anthony Robles has the kind of life story that you’d say could make a good movie. If it’s up to Dwayne Johnson and his Seven Bucks production company, that’s exactly what’s going to happen.

The film is titled Unstoppable, also the title of Robles’s 2012 memoir, upon which the project will be based.

If you’re not familiar with Robles’s story, he was born without a right leg. But even as early as three years old, he refused to wear a prosthetic to compensate. (As it stands, his leg is missing up to his hip so there’s no stump to which he could attach an artificial limb.) Robles eventually learned how to work around his disability on the wrestling mat, eventually discovering that his missing limb contributed to a low center of gravity that helped him with defensive maneuvers.

Born with one leg and an unconquerable spirit to becoming NCAA wrestling champion.
Very special story we at @SevenBucksProd are honored to tell. Thank you @ARobles125 for your trust in us to share your incredible journey with the world. #UNSTOPPABLE https://t.co/uwd3ukA3ZM

In high school, Robles won Arizona state high school wrestling championships as a junior and senior, compiling a 96-0 record during those two years. He continued that success at Arizona State, wrestling at 125 pounds. As a collegian, Robles won three Pac-10 (now Pac-12) championships and was honored as an All-American three times. During his senior season in 2011, he went undefeated (36-0) and won an NCAA title.

At the 2011 ESPYs, Robles was awarded Best Male Athlete with a Disability honors in addition to the Award for Perseverance.

Last year, Robles set a Guinness World Record for most pull-ups in one minute during halftime of a New York Jets game. He performed 62 pull-ups, breaking the previous high mark of 61.

UPDATE: Robles will appear on NFL Network’s NFL GameDay Morning this Sunday (Nov. 10) to attempt breaking the Guinness World Record for most pull-ups in one minute while carrying a 40-pound weight. The current record is 32, set by Adam Sandel, in 2017. NFL GameDay Morning begins at 9 a.m. ET.

I’ve trained for a year to break the @GWR for most pull ups in 1 min. w/a 40lb. weight. This goal is part of my dedication to the @DAVHQ #Victory4Vets program.Join me & start your own #Victories4Vets goal. Visit https://t.co/ABdJGL01MN for more info! #DAV #NFL @BeUNSTOPPABLE pic.twitter.com/vFMsiHD41U

Robles is currently an analyst for ESPN’s coverage of the NCAA wrestling championships.

“Words cannot express how honored I am to have my story made into a film,” Robles said in an official statement (via Deadline). “Because I was born missing my leg, my entire life I’ve had to deal with people having low expectations of me.

“When I got into wrestling, most people thought it was impossible for me to become even an average wrestler. I’m hopeful that people who see Unstoppable will walk away believing that you should never let your challenges define you. If you have a goal, go after it with everything you’ve got. Nothing is impossible.”

According to Deadline’s Mike Fleming, Unstoppable is already on a fast track for production which should mean that we’ll see Robles’s story on the big screen relatively soon.