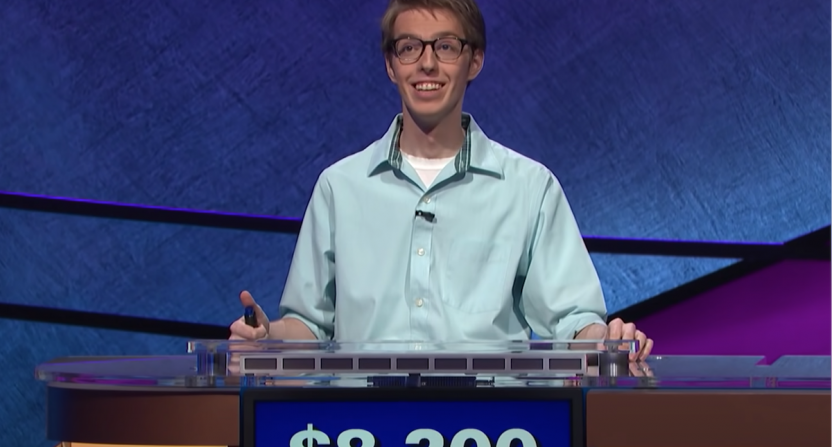 Does anything make a sports fan feel smarter and more confident than watching a presumed trivia whiz blank out for a sports topic on Jeopardy!? If a contestant gets what many of us would view as an easy clue terribly wrong, it’s a safe bet that a clip will quickly circulate on social media.

In a recent piece for the Toronto Star, Alex Wong explored why Jeopardy! contestants, who seemingly know at least a little bit about everything, were so bad at sports topics. Sure, there’s the stereotype that “nerds” don’t know anything about sports. Or is it silly to assume that somebody who happens to know each of the vice presidents throughout history should also know that a football kicked between the goalposts is called a field goal?

Wong talked to Justin Earnshaw, one of the contestants on a February 2018 episode that had a clip go viral when none of them could answer the clues in a football category. Neither of them even buzzed in with an attempt.

“My mom, who was in the audience for the taping, is obsessed with American football,” Earnshaw told Wong. “As soon as I stepped off the stage, she gave me a little bit of hell in the most loving way.”

The clip is even funnier because Alex Trebek poked fun at the contestants for their lack of football knowledge. Being a big sports fan, perhaps Trebek was a bit surprised that all three of them completely whiffed on the category.

“Do you think we should go to commercial?” Trebek joked at one point.

Wong’s reasoning for the amusing difficulty: We don’t study sports in school. Sports facts or trivia aren’t a part of any curriculum. To learn such information, you need at least a passing interest in the subject. If you’re not a sports fan, how would that happen?

“If you don’t follow sports, there’s a huge gap,” said Merchant. “If you’re at school, you’ll pick up on Shakespeare. But it’s not like you’re going to learn about LeBron James in school.”

Claire McNear on why Jeopardy contestants are so often bad on sports questions: pic.twitter.com/HRXfofyWYr

The Ringer’s Claire McNear — who just wrote a book about Jeopardy! titled Answers in the Forms of Questions, believes there’s some snobbery toward sports among the trivia community as well.

“Similar to pop culture, there’s this kind of disdain for sports amongst a lot of people who are these elite trivia figures,” McNear explained on The Press Box podcast. “That’s why those contestants on Jeopardy! don’t know the answers to a sports category that’s not conventionally really difficult.”

Previous contestants had different suggestions on how to navigate a sports category successfully. One told Wong to just punt the category altogether, while others advised brushing up on some facts such as Kentucky Derby and NCAA Tournament winners, learning a Yogi Berra quote, and learn Hall of Famers in the major sports. Just practicing with some sports quizzes seemed to be the most popular solution.