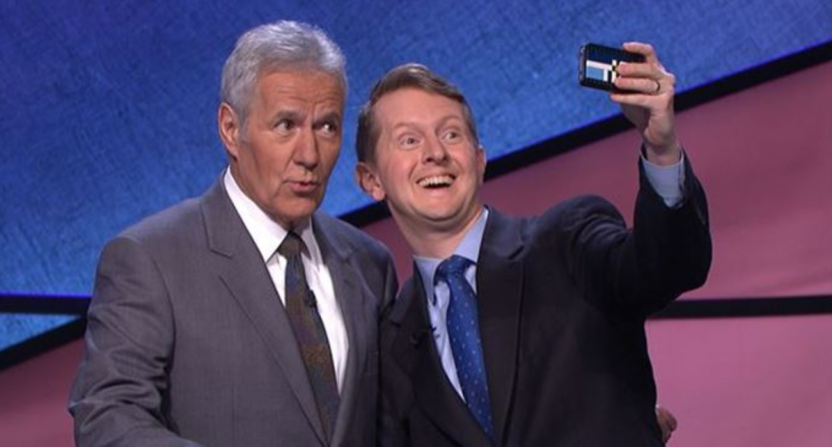 Soon after Alex Trebek’s death earlier this month, the conversation soon focused on who could replace the pop culture icon as host of Jeopardy!. Whoever eventually takes that role steps into a considerable footprint. Trebek was an institution, familiar to trivia buffs and the mainstream public.

Many fans of the show support Ken Jennings for the job. Holding the longest winning streak in the show’s history at 74 games, he’s synonymous with Jeopardy!. Both with his appearances on the show and his presence on social media, Jennings has shown a sense of humor that would make him a good host. As a longtime participant, he also has a deep reverence for the show and what it means to the culture.

Jennings will essentially get to audition for the spot as one of the interim hosts scheduled to fill in after the new year while producers decide on a permanent replacement. Others will be announced soon, and it’s a good guess that they’ll be considered for the job as well.

We will resume production on 11/30 with a series of interim guest hosts from the Jeopardy! family – starting with Ken Jennings. Additional guest hosts to be announced. pic.twitter.com/0MdGqnzp3R

Here at Awful Announcing, we thought we’d join the conversation and asked our writers for their choices on who should replace Trebek. Who would you like to see take over as host or do you agree with our picks?

Andrew Bucholtz: I think Jeopardy!‘s announced plan of having various guest hosts for a while is a good one. That will provide some space from the Trebek days and make it easier when someone is eventually picked to take over full-time.

When that time comes, there are lots of good candidates, but I’d really love for it to be LeVar Burton. He’s shown great hosting ability with Reading Rainbow, and I think he also has just the right amount of comic timing (see his appearance on Community, or some of the funnier bits he occasionally got to play on Star Trek: The Next Generation) for the role. So I think he’d be an excellent fit here.

Jay Rigdon: Jeopardy! may have already landed with the best possible option, naming Ken Jennings as the show’s first interim host. Other than Alex Trebek (RIP), Jennings is pretty easily the most famous person to be associated with the program, and he’s also probably spent more time on-camera than anyone other than Alex, too.

No one is more familiar with the rhythms and strategy of the game, and Jennings clearly has the right sensibility for the show as well.

If we’re looking beyond Jennings (and, again, I don’t think they should), and we’re including names of people who probably wouldn’t do it even if offered a pile of money: Jon Stewart would be a great fit, too. Again, he’s almost certainly not going to take a job like that, but his sense of humor, intelligence, and broadcasting ability would shine through.

Ken Fang: I’m going to throw the proverbial hat in the ring for Ken Jennings. He was hired by the show earlier this year to be a consulting producer and likely to succeed Alex Trebek. He is the obvious choice and as he will be the first of several of interim hosts, consider his gig to be an audition of sorts.

While no one will really replace Alex Trebek as the true host of Jeopardy, Jennings may have the gravitas to pull it off having been a multiple contestant and knowing what it takes to press the buzzer.

Will he get the gig full-time? It’s up to Sony and the Jeopardy producers, but for now, I see him as the clubhouse leader unless someone else rises like a phoenix and takes the host mantle.

Matt Clapp: I’m going to suggest somebody that already has some Jeopardy! hosting experience… at least on the sports side of things. How about Dan Patrick?

Yes, he’s 64 and ideally, they can find a long term answer here.

But Patrick did a terrific job as host of Sports Jeopardy! for a few years. He’s a professional that brings the intelligent, witty, and calm — with the ability to be fun and entertaining — approach that made Trebek such a perfect host. He’s a very good communicator — as shown in his radio interviews — that can also loosen things up with conversations with the contestants.

This is a longshot, and he may not even have an interest in the job at this point, but he’s definitely a name to consider. And he’d be a pretty safe bet to do well at the job.

Ian Casselberry: Willie Geist of Morning Joe and Sunday Today was the first name that came to mind. Maybe he’s not as well-known to the general public, but Geist has a great dry wit and his current roles require him to be familiar with current events, pop culture, and sports. His Sunday interviews show that he’d have a good rapport with contestants as well. And he’s young enough that he could host the show for decades.

But I also think there’s an opportunity here with putting a person of color or female behind that famous podium. This is a moonshot choice that will never happen, but I would love to see Tina Fey host Jeopardy!. She’s smart and funny, and would take the role seriously while also bringing levity and entertainment to the show. Being successful with writing TV shows and movies probably mean she wouldn’t have an interest, but producers should still check with her.

Sean Keeley: Admittedly, I’m not a huge Jeopardy! watcher, but when I think about who they should replace Alex Trebek with, the thing that comes to mind is that it’s more important that they don’t try to emulate him.

The worst thing they could do is try to find someone who is like Trebek because there is simply no replacing his personality, demeanor, and presence. If you try to mimic any of that, you’re setting yourself up for failure in the eyes of longtime viewers who will just be reminded of how much better Trebek was than the copy you’ve put in front of them.

So I think it’s really important that they just try to find someone who makes sense for the show, but is also their own person. I know Ken Jennings is the obvious pick, but there’s a reason for that. He knows and appreciates the show in a way few other hosts could, he’s been a contestant so he can relate to future ones easily, and he’s charming and funny in a way that’s different to Trebek but still fits well with the program.

I think this is a case where the obvious answer is the right answer, and any attempt to overthink it is going to get you into trouble.