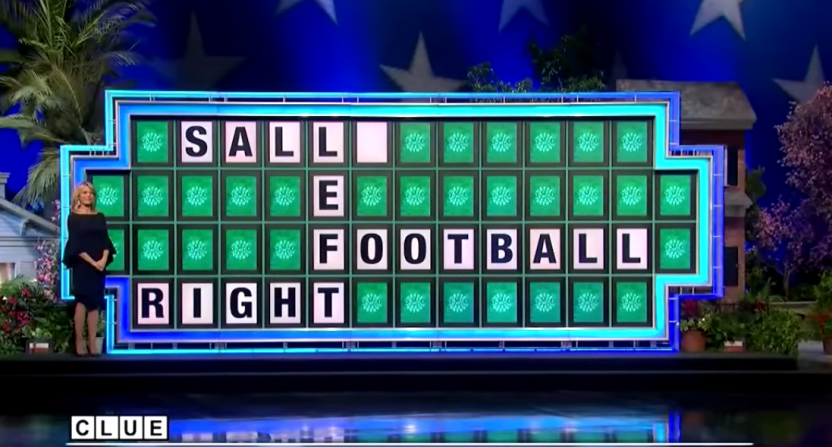 Last week, Wheel of Fortune contestant Kristin Shaw looked to have a solid collection of cash and prizes coming her way. It was a Crossword Clue round, and with one letter left on the board, Kristin chose to solve the puzzle.

Except this being a Crossword round, it wasn’t a straightforward phrase or answer, which brings into play a Wheel of Fortune rule that often isn’t as important: you can’t add any words or letters to the answer. Pat Sajak even tries to head this potential mistake off, noting that she shouldn’t add anything to the answer. It wasn’t enough, though, as Shaw tossed in “and” between the third and fourth words.

You can see the exchange at the beginning of the video here:

This "Wheel of Fortune" contestant lost $1950 and an $8000 trip to Nashville, simply by saying "and" when solving a puzzle. https://t.co/jYaYFyrG6Z pic.twitter.com/tHPGntbMkG

Obviously that’s a tough way to lose out on the prize; her fellow contestant was noticeably guilty solving the puzzle after her error, and Kristin ended up missing out on nearly $2,000 in cash and a trip to Nashville valued around $8,000. (Which, wow, they must be staying at a hell of a hotel.) After the episode aired, there was some anger over the rule, but that seems misplaced! It sucks for Kristin, sure, but this isn’t a new thing, and while it may only be a major issue in slightly different rounds like this one, you have to draw a line somewhere.

Don’t add the word! On Jeopardy, the only basic rule is answer in the form of a question, and you only really have to do that for Double and Final Jeopardy, for example. (In the first round you’ll just get a warning.) No one really gets mad if a contestant is penalized for violating that rule. A much more questionable (and, admittedly, funnier) example from Wheel of Fortune is this, when a contestant lost because he completely whiffed on a pronunciation of an entirely solved puzzle, costing himself a shot at $1 million, however long those odds were.

To her credit, Stewart is handling it well according to this report from Maine’s WGME:

Shaw was visibly upset on the broadcast, and fans took to social media to express their dismay at the rule, which has long been in place on “Wheel of Fortune.” An unnamed spokesperson for the show told Fox News over the weekend that the rule had been in place for some time.

“Our long-standing rule is that in order to have a correct puzzle solve, a contestant must say only what is on the board without adding words,” the spokesperson told Fox News. “Contestants are thoroughly briefed prior to the show, and Pat often reminds them of this rule when solving a puzzle in this particular category.”

Shaw taped her episode in October, and had to sit on her snafu for the rest of the month.

“It was embarrassing, because it was a dumb mistake,” said Shaw, who got on the show by attending the “Wheel of Fortune” wheelmobile event at the University of Maine in Orono in June.

And while the moment wasn’t fun for anyone involved, the contestant who ended up winning that round offered to pay Shaw the amount he won from that portion of the show, and a Nashville travel company is giving Shaw a trip for two as well:

A few days after the taping, the contestant who did win, Bryan Idler of San Luis Obispo, California, reached out to Shaw and offered to write her a check for the $3,550 he won during that round. Shaw would not say one way or another whether she accepted the money, but did say she was touched by Idler’s gesture.

“I would prefer to leave that private, but I will say that Bryan is a very kind man, and it shows that there are some really wonderful people out there in the world,” she said.

Shaw was also contacted over the weekend by Nashville-based travel company Adventureworks. The company’s owner, L.J. Whalen, offered Shaw a trip to Nashville that includes airfare, accommodations and tickets to the Grand Ole Opry. Shaw said she plans to go with her mother sometime in 2020.

So there’s kind of a happy ending here, at least.