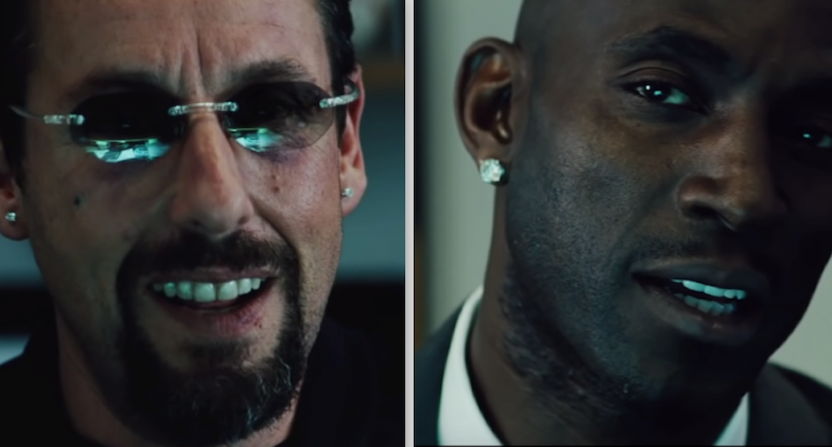 Any movie set in the sports world is going to draw scrutiny from fans and media for authenticity. If actual events are involved in the story, filmmakers getting any and all details wrong affects the movie’s credibility.

Though it’s a very small detail in Uncut Gems, a scene in which Adam Sandler’s character, Howard Ratner, mixes up ESPN and TNT while watching an NBA playoff game is the sort of thing that can take some viewers out of the film. Ratner tells his wife to turn the channel to ESPN for the Celtics-Sixers game, but the actual telecast was on TNT.

DAZN’s Adnan Virk is exactly the type of fan who would grind over such a detail. Working at ESPN at the time, Virk was especially bothered by that apparent flub. In his position as credentialed media and host of a movie podcast, “Cinephile,” Virk had an opportunity to ask the film’s co-director Benny Safdie about that ESPN-TNT mix-up.

“And the guy, Benny, is just starting at me, and I go ‘Dude, I’m 100 percent positive.’ I didn’t want to be like ‘Hey, I worked at ESPN, trust me,’ but I would know Mike Breen’s voice versus Kevin Harlan or Marv [Albert] or whoever’s calling the game. So this is the heart attack I gave one of the hottest young directors in Hollywood.”

Virk went on to explain that Safdie was confounded when asked about it, to the point where he felt bad about bringing up the mistake.

Apparently, the ESPN-TNT blunder has now drawn enough attention that TMZ asked Benny and Josh Safdie about it while the brothers were signing autographs for fans outside Tao Asian Bistro in Los Angeles. If the directors were initially mortified about the snafu when it was pointed out, they appear to have gotten past that.

When asked if the mix-up matters, Benny Safdie was ready with an explanation:

“No, because they go back and forth from TNT to ESPN,” Benny said. “When he gets the remote, he does turn it on to TNT. So he knows what channel it is.”

Oh, if only a clip of that scene was available online…

Josh Safdie even embraced the error (while also scoffing) when he was asked about it.

“A bettor has his own habits,” said Josh. “If you look closely, Howard’s the one who actually has the remote. So there’s nothing to debate really. He says ‘ESPN,’ as we’ve all said at a time.”

He went on to say that he loves people nitpicking at that detail because it means those viewers are holding the movie up to a high standard, expecting reality.

The Safdie brothers certainly have their response down now, after Virk caught them off-guard and it became a thing online. Ratner mixing up ESPN and TNT was a character detail that could easily be explained by his state of mind and frenetic lifestyle anyway. But like they said, if people didn’t care, they wouldn’t point this sort of thing out.