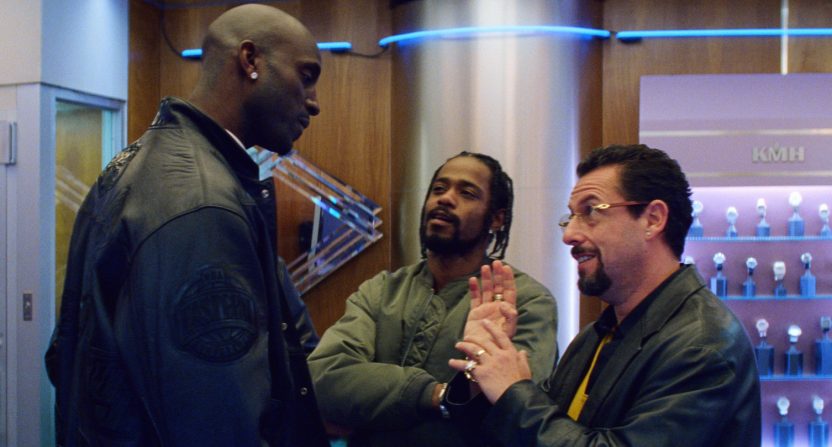 Uncut Gems is hardly an ideal holiday movie. It’s not a film for the whole family to enjoy after spending time together opening gifts and eating big meals.

But maybe the holiday season is a good time for this crime thriller, when time off from work has you hopefully feeling rested and rejuvenated. You’re going to need that energy to get through an intense experience, one that will leave you trying to catch your breath during the closing credits.

From the second it begins, Uncut Gems is on the go, keeping up with the frenetic lifestyle of New York City jeweler Howard Ratner (Adam Sandler), who’s constantly working every angle he can to sell expensive watches, rings, bracelets, necklaces, and earrings to his high-rolling clientele. But he’s also using the money he makes from selling (and loaning) those luxury ornaments and keepsakes to bankroll an obsessive sports gambling addiction.

As you might expect, Howard’s compulsive gambling has left him in significant debt. Any winnings go toward paying off a different bookie or loaner, but he’s run up far too many bets and balances to get in the clear. That’s led the people he owes to come collecting, some of whom prefer to inflict physical punishment when payment isn’t ready.

Every time Howard turns a corner, someone is after him for payment. There’s no room to breathe. Cinematographer Darius Khondji (Too Old to Die Young) helps ramp up the tension with his constantly moving camera, tight close-ups, and curious lighting that throws the color off just enough to create a distorted sense of reality.

Yet possible salvation comes into his jewelry shop when Howard’s middleman, Demany (Lakeith Stanfield), brings in NBA star Kevin Garnett (played by Kevin Garnett!) to make some potentially lucrative purchases. The story takes place in 2012, when Garnett’s Boston Celtics are in the Eastern Conference Finals versus the Philadelphia 76ers.

Garnett is presumably taking a break with a trip to New York and looking for some shiny inspiration before a big game. But Howard also sees the basketball superstar as a means to bankroll his latest attempt at a huge payday, tantalizing Garnett with a rock he illegally obtained from Ethiopia that contains several uncut black opals.

Once he takes a look at the gems, Garnett is mesmerized by their colors. He’s never seen anything like them and wants them as part of his collection. (Later on, he also seems to think that the gems might have some magical properties that could help him have a good game.) Garnett insists on borrowing the rock while deciding whether or not he wants to buy it. As collateral, Howard asks for Garnett’s Celtics championship ring — which he then uses to fund a bet that could pay off all his debts.

Amusingly, Howard’s bookie is played by Mike Francesa, who’s surprisingly convincing with the same fast-talking, authoritative voice that’s made him such a successful sports talk radio personality. As a guy who runs bets out of his restaurant, Francesa believably leans on his kitchen staff to get a dish right while telling Howard that his six-way parlay involving Garnett and the Celtics is “the dumbest fucking bet I ever heard of.”

Casting Francesa might seem like a gimmick, but it helps create an authentic atmosphere because he has such a distinctly New York voice and personality. It’s even more important that the Safdie brothers cast a real NBA player in their movie, one who was actually playing during the time when the story takes place. The movie wouldn’t have been as believable with a fictional pro basketball player, even if a known actor played him.

There have been several reports of Kobe Bryant, Amar’e Stoudemire, and Joel Embiid being considered for the role of Howard’s unwitting benefactor, but Garnett fits the part perfectly. Playing for an east coast team involved in the playoffs and still a championship contender, the key scheme of the movie can be built around him.

Garnett looks much as he did in 2012, like he could still go for 48 minutes in an NBA playoff game, and he has enough of a personality and star power to hold his own, acting-wise, with Sandler. Plus, he seems just quirky enough to believe that a rock full of black opal gems could somehow help him have a great game.

However, Garnett is just one piece in a house of cards that seems destined to topple. You know this isn’t going to work out for Howard. He’s created too many problems for himself, which also keeping a mistress in the city while his marriage falls apart. But like any gambler, he believes that one big hit will bail him out and give him life to fight another day.

Chasing that big payoff, feeling like he has some control or ability to guess several outcomes in a game, is the juice that keeps Howard going. He wouldn’t want to live any other way. And it’s the fuel that keeps Uncut Gems driving toward an ending that will leave you needing to wipe your face and get a drink afterward.