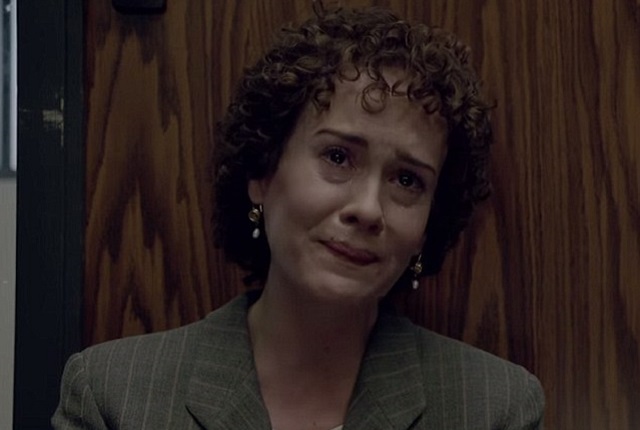 With 10 episodes to work with, American Crime Story: The People v. O.J. Simpson can occasionally turn the camera away from the Simpson case, courtroom proceedings and behind-the-scenes legal strategy, and focus on a particular character to see what else is going on in his or her life. In some instances, the glimpse has been brief, such as seeing Johnnie Cochran practice opening arguments with his wife before bedtime or Christopher Darden dealing with the racial overtones of the case in his neighborhood.

But episode six, “Marcia, Marcia, Marcia,” zooms in on prosecutor Marcia Clark (Sarah Paulson) and the intense scrutiny she faced from the media and public — not just as a lawyer, but as a woman. From the beginning, Clark has known that the perception of her as a cold bitch presented an obstacle with a jury in the courtroom. But as the Simpson trial progresses and Clark was on our televisions every day for eight hours a day, she was judged in a way that her male colleagues weren’t.

Particularly, Clark’s physical appearance became a frequent discussion point on talk shows and tabloid covers, as TV and newspapers worked to fill their airtime and space with all the O.J. coverage they could. (A couple of scenes in the episode show a NBC executive deciding to pre-empt daytime and prime-time programming with trial coverage and nightly recaps.) Early on, we see Clark return home after finishing the day in court and as she decompresses outside with a cigarette, she notices the TV show her babysitter is watching. The host is talking to a fashion expert analyzing Clark’s style, or lack of it. Her verdict is swift and unmerciful, labeling Clark “frump incarnate.”

Clark’s fashion sense becomes enough of a talking point that her boss, L.A. District Attorney Gil Garcetti (Bruce Greenwood), tries to reassure her that such stuff doesn’t matter and she shouldn’t pay attention to it. Focus on what’s important. But at the end of the conversation, he still offers to put her in touch with a couple of media consultants to improve her look. Is that because he thinks it will eliminate one more thing for his prosecutor to worry about? Or does he agree with all of the other makeover consultants chiming in? 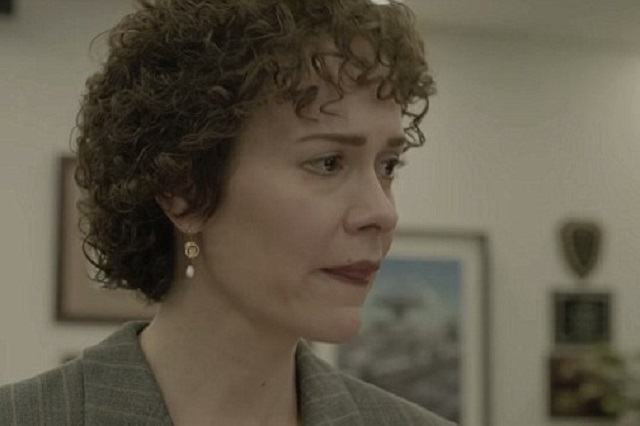 Eventually, Clark lets all the sexist chatter get through and she decides to go to a stylist and get a new hairdo for a “softer” look. Even if the makeover gives Clark a confidence boost and helps her feel good about herself, it’s a temporary uplift. The resulting perm is immediately noticeable and quickly ridiculed in the tabloids. More importantly, by changing her look, Clark has acknowledged that she’s paying attention to all the scrutiny and coverage. It has to be getting to her on some level. She can’t win.

However, fashion critics aren’t the only matter outside the Simpson case that Clark is dealing with. The episode begins with a tight close-up of Clark’s face in what appears to be an unbearable situation. But as the camera zooms out, we see that she’s not in Lance Ito’s courtroom dealing with testimony and arguments during the Simpson trial. Clark is in family court, trying to hash out custody and child-care payments. She’s in hell, if for no other reason than she’s not in control as she’s normally accustomed to.

Of course, the truth is that Clark is barely in control of anything having to do with the Simpson case — nor in her personal life, especially now that it’s being scrutinized by the tabloid media. Her family court hearing makes her late for trial, keeping everyone waiting. At one point, when a hearing about a potential witness threatens to make that day’s proceedings run late, Clark has to sheepishly admit that she can’t stay late because she has to take care of her children. The derision in the courtroom is palpable, with Judge Ito unhappy that they have to recess earlier than he prefers and the defense attorneys snickering amongst themselves. The next day, Johnnie Cochran makes a crack about Clark’s child-care considerations, which enrages her. But it’s a concern no one else involved with the trial is dealing with.

Naturally, taking care of her kids wouldn’t be as much of an issue if Clark wasn’t going through divorce proceedings and fighting for custody. But in addition to having battling the defense in court over the Simpson murder case, she also needs to show that she’s a good and capable mother. However, it certainly doesn’t help matters when Clark’s ex-husband criticizes her to the press for making their children a public issue and using them to gain leverage in court.

Though “Marcia, Marcia, Marcia” is largely devoted to Clark and the many problems she was dealing with in her personal life that made her professional life increasingly difficult (the stacks of files on her desk and bed that she has to contend with is a frequent visual device in this series), there is still an overall narrative to serve and the case moves along, with the prosecution and defense trading blows in court. 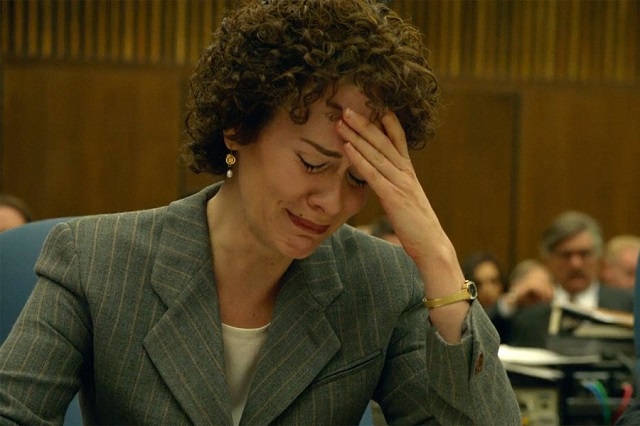 Nicole Brown’s sister, Denise, testifies about Simpson’s frequent bullying and abuse. Cochran begins laying the foundation for establishing that the three detectives who arrived on the murder scene and collected evidence were incompetent. In particular, Det. Tom Lange (Chris Bauer) admits in testimony that he took a pair of bloody shoes home with him, keeping them in his trunk for six hours before turning them in for evidence. Cochran also turns a casual, private conversation with Lange into a weapon when he points out that the officer lives in Simi Valley, which is where the cops from the Rodney King beating also lives. A nanny from the house next door to Simpson’s (called in as an emergency witness to disrupt Clark’s momentum) supposedly dispels the prosecution’s timeline, but she and her memory prove completely unreliable, notably when she tips off that she’s been coached by Cochran.

Ultimately, the episode comes down to something the story has been building toward for the past three to four episodes: the testimony from Det. Mark Fuhrman. The defense seemingly can’t wait to get Fuhrman on the stand so they can establish he’s a racist and set their narrative for the rest of the case. Prior to that, Clark’s questioning shows that Fuhrman is an extremely serious and meticulous detective, one who’s done strong work surveying the crime scene and analyzing the evidence on hand. But once F. Lee Bailey takes the podium and asks Fuhrman if he’s ever used the N-word, everything changes. Fuhrman can’t possibly be viewed credibly by the jury after that.

Yet Clark’s personal life is still the obstacle she can’t overcome. A tabloid has run a photo of Clark running topless on a French beach, which apparently came into its possession from her first ex-husband (not the one with whom she’s battling for child custody). Garcetti shows her the copy of the National Enquirer, convinced that it’s all fake. But Clark confirms that the photo is real and realizes it must have come from her ex-husband, eager to exploit their past relationship for publicity (and cash). (As it turns out in real life, her former mother-in-law is the one that submitted the photo.) And she has to go back to court right after learning about this. Judge Ito can see that Clark is barely holding it together and compassionately recesses for the day.

All of this speaks to the unfair world Clark is working in, one that makes life difficult for women personally and professionally to this day. (Is it a coincidence that this episode aired on International Women’s Day? Probably, but the timing worked out pretty wonderfully.) This is yet another example of what makes The People v. O.J. Simpson such a compelling series. To those who think, “Oh, I already know everything that happened; I don’t need to see it again” or ask “Why would you want to put yourself through that again?” you’re cheating yourself. So many aspects of this case and the people involved resonate more than 20 years later. (There’s even a joke about hand size, something that has unfortunately entered into our political news cycle over the past couple of weeks.) Maybe the writers put too fine a point on that occasionally, but the reverberations apply nonetheless.