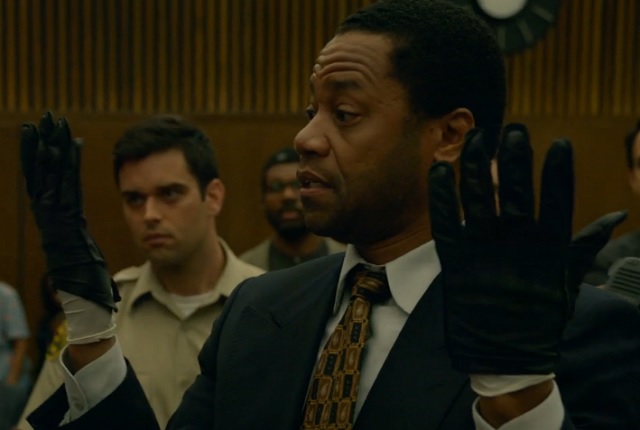 Six episodes into American Crime Story: The People v. O.J. Simpson, there had been one moment that the story hadn’t yet gotten to, probably the most important moment of the O.J. Simpson murder trial. It’s an indelible image that the prosecution was never able to overcome, and the defense surely won with the jury at that point.

The gloves. Episode seven, “Conspiracy Theories,” finally got there. Those gloves were arguably the most damning piece of evidence the prosecution had to prove Simpson’s guilt. One glove was found at the crime scene, the other behind the guest house on Simpson’s estate. The gloves had DNA from Simpson, Nicole Brown and Ron Goldman on them. They were probably the closest thing the prosecution had to a smoking gun.

But how to use that evidence was a point of contention among the prosecution team. Marcia Clark (Sarah Paulson) thought the gloves, what was found on them, and a receipt that proves Brown bought them for Simpson should speak for themselves. Yet Christopher Darden (Sterling K. Brown) wanted to push the issue and use the gloves as a weapon in the courtroom. Make Simpson put on the gloves. Show the jury that his hands fit in them perfectly, demonstrate emphatically that he was the one who murdered Brown and Goldman, and get it all on camera.

With the gloves being part of testimony, Darden wants to make a flashy play. To that point, the defense has been dazzling the jury with wild speculation and theories, trying to create the idea that somebody — anybody — else but Simpson could have committed these murders. 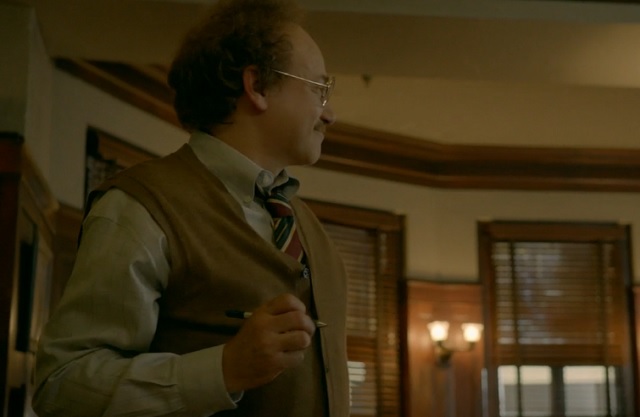 Early in the episode, we see Alan Dershowitz (Evan Handler) trying to impress this upon his students at Harvard. They’re all watching the trial during class, and as part of the defense team, Dershowitz is in a unique position to use it as a teaching tool. As Johnnie Cochran is questioning Det. Tom Lange on the stand, an idea occurs to Dershowitz and he faxes it to his fellow attorneys. Ask the detective if he’s familiar with Colombian neckties. Introduce an exotic concept of an elaborate crime to the jury and it draws their attention, far more than talk about hair fibers, blood evidence and timelines.

But Clark thinks making Simpson put on the gloves is a bad idea. She’s always thought it was a bad idea. “You turn over control of a demonstration to the opponent, you don’t know what’s going to happen,” she tells Darden. “And certainly not to the defendant himself.” (There’s also tension between Clark and Darden resulting from a weekend excursion to Oakland, in which the two didn’t follow through on developing feelings.)

Case closed? Not so much. Not when the defense realizes that those gloves can be used to their advantage. The gloves are introduced in testimony with Darden questioning an expert who testifies how few people own those particular leather gloves, and how unlikely it would be that they weren’t part of the same pair found at the crime scene and Simpson’s house. The trial takes a recess and defense attorney Robert Shapiro (John Travolta) takes a moment to look at the gloves, the evidence that he feels will surely convict his client.

That’s when Shapiro has his epiphany. The gloves look too small. He tries them on and they don’t fit. And his hands are smaller than Simpson’s. Shapiro calls the defense team into a huddle and pitches a new play. No more wacky conspiracy theories to create other killers or elaborate schemes in the jurors’ minds. Give the jury something real. Use the prosecution’s hard evidence against them. Let O.J. try on the gloves. Cochran and Robert Kardashian (David Schwimmer, who hasn’t said “Juice” in the past two episodes) think it’s a bad idea. What if the gloves fit? But Shapiro is confident and so is Simpson. 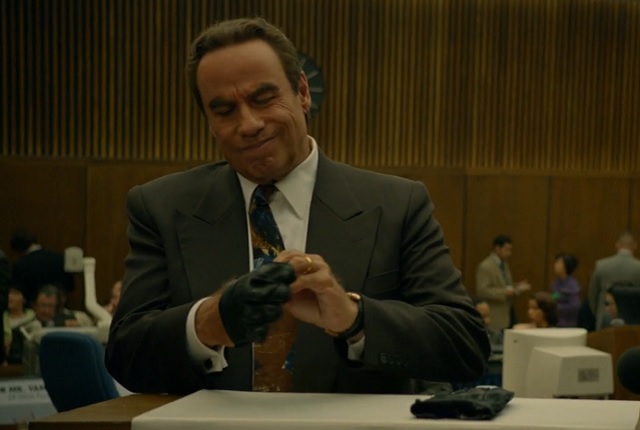 For Shapiro, it’s a moment of redemption. He’s been increasingly marginalized by Cochran on the defense team, especially because he thinks Simpson is guilty and wants to seek a plea deal. (During this episode, he even asks Kardashian if he has the murder weapon hidden away.) He laments making racial discrimination a key angle of the trial, which has inflamed race relations in Los Angeles and threatens to ignite another set of riots. Simpson even calls Shapiro out for trying to undercut Cochran and not showing a united front in their case. But his inspiration to use the gloves against the prosecution is the turning point of this trial.

The question then becomes how the defense presents a scenario in which Simpson would try on the gloves. This is the prosecution’s testimony. So let them present Simpson with the gloves, F. Lee Bailey (Nathan Lane) proposes. Is it possible that he sensed Darden always wanted to make Simpson put on the gloves during the trial? Maybe. But Bailey essentially challenges Darden’s manhood before court resumes. You don’t have the balls to see if your evidence is iron-clad.

Whether Bailey realizes it or not, the challenge hits exactly the right nerve with Darden. He’s wanted to make the big play all along, but Clark has been holding him back. Go for it. Throw deep.

As the trial resumes, Cochran calls a sidebar with Judge Lance Ito. He sees where this stuff with the gloves is going and doesn’t like it. If the defense decides to put Simpson on the stand to testify, then go ahead and ask Simpson to put on the gloves. Never mind that the prosecution hasn’t asked to do so yet. It’s all a show to pull Darden in. Act like this is something the defense doesn’t want him to do. Those gloves will convict Simpson if they’re used the way the prosecution presumably intends. Judge Ito says Darden can do what he wants with the gloves, though Cochran can object if he pleases. 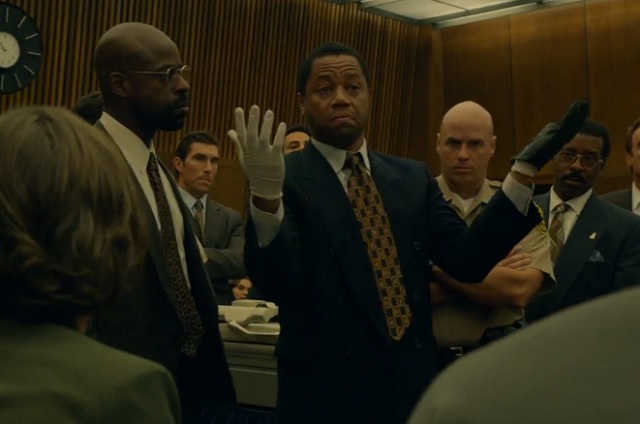 The bait is laid out and Darden is all too willing to take it, eager to one-up the mentor who has continually humiliated him in court and public. The poor guy has been played, and played badly.

Throughout The People v. O.J. Simpson, Darden has been portrayed as the tragic figure of this story. His place in the African American community has been challenged and questioned by Cochran. His ability as a lawyer and litigator was stunted by the L.A. District Attorney’s office. Maybe he’s been used as a tool by Clark, a black face to show the jury that would counter the defense’s race argument. By nailing Simpson in court with the gloves and providing definitive proof to the jury, Darden would defeat all of his doubters.

As we know all too well, the attempt backfired disastrously. Simpson is asked to try the gloves on and makes a show out of how difficult it is to put those tiny gloves on his big hands. Cuba Gooding Jr. does a great job of re-enacting Simpson’s acting work in court (arguably Gooding’s best work in this series and Simpson’s finest performance ever), hunching over and straining to pull those tight gloves over his fingers, then his hands. The edge of the gloves won’t even go to his wrists. “These gloves are too small,” he says innocently.

Darden tries in vain to salvage his gambit, telling Simpson to straighten out his fingers, make a fist, then hold an object. But it doesn’t matter. The gloves don’t fit. Simpson looks at Darden like he just outran him to the end zone for a touchdown. You took your best shot and missed. The jury (which may be too obviously portrayed as wanting to believe Simpson’s innocence) sees what appears to be affirmation. Clark’s worst fears have been realized to horrible effect and she shoots Darden a withering look. Cochran slaps hands with Shapiro.

It’s a devastating development, one the prosecution never recovered from. Darden thought he had a conviction teed up, but he swung and missed badly. The image of Simpson holding up his hands with the ill-fitting gloves has burned itself into cultural memory. The episode ends with what has to have been one of the most painful phone calls of Darden’s life, apologizing to Fred Goldman for misfiring so badly in court and creating an enormous setback in the attempt to convict his son’s murderer. The fact that the call went to Goldman’s answering machine dulls the anguish and embarrassment only slightly.