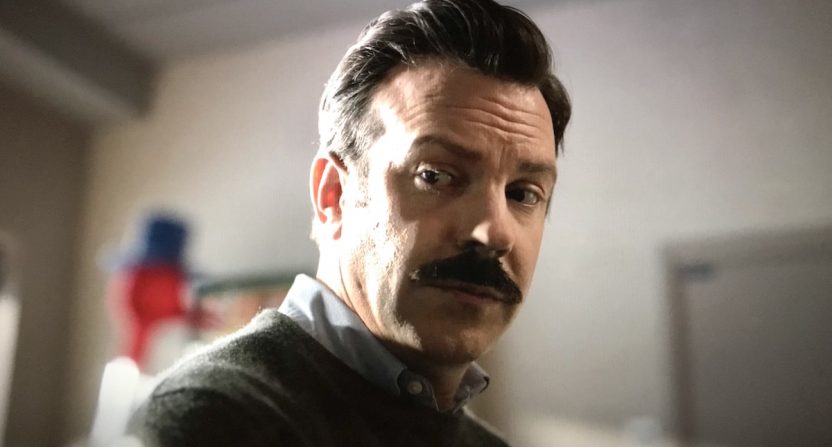 Those who have been saying Ted Lasso, Season 2 has lacked conflict, we have it now. Ted has his long-awaited session with Dr. Sharon Fieldstone, seemingly ready to address his problems. But it’s not that simple, which makes for good TV. Also not simple is The Roy Kent Effect on his relationship with Keeley. And the Nate storyline continues to get darker.

Peas and carrots, beef chunks, let’s make some stew with our group recap of Episode 7, “Headspace.”

Michael Grant: In the most realistic episode of Season 2, we get the most realistic version of Ted. Not his usual, chummy, overwhelming positivity. Not his cartoonish alter ego Led Tasso. Instead, we see a vulnerable person whose charm masks personal struggles.

From previous episodes, we knew of his distrust of Sharon. Still, it was raw and believable when he lashed out at her. That’s how some people view therapy. A completely understandable reaction, considering therapy didn’t save his marriage. Only complaint: we’re still waiting to learn the root cause of Ted’s emotional pain.

Ian Casselberry: I admire the willingness here to make Ted look like kind of the bad guy for an episode as he balks against the whole idea of therapy. (And Jason Sudeikis does a great job of showing Ted’s nervously manic and angry sides.)

But we know that the real conflict isn’t between Ted and Dr. Sharon. It’s Ted vs. himself. He knows he needs help. That’s why he ended up in Sharon’s office to end the last episode. It’s why he shows up for sessions each morning. Yet he doesn’t want to go where he needs to go, to do the necessary work for confronting his issues. This wasn’t going to be resolved in one episode and it’s assuring to see that the writers are taking their time with this storyline.

Matt Clapp: We’re learning a lot more about Ted and how vulnerable he is, while also having more questions to go with that. Coaching and the happy-go-lucky personality Ted brings with it work as a distraction to some of his deeper issues, which Sharon is uncovering. On a lighter note, Ted chucking the Kleenex box across the room was quite funny.

The truth will set you free… #TedLasso pic.twitter.com/xPrUC0Hflx

Jay Rigdon: The show has purposefully kept Dr. Fieldstone separate from the audience; she’s obviously had plenty of positive impact on players, but that’s been offscreen.

Ted has been our POV character and given his aversion to therapy, it feels like a conscious choice to keep Dr. Fieldstone as a bit of an “other” character, outside the ensemble.

I absolutely loved the moment where she calmly but forcefully pointed out where Ted was both wrong and disrespectful. And it’s a relationship that really does offer a different view of Ted Lasso. If the show handles it as well as it handles most things, it’s very promising.

How about the Roy-Keeley storyline?

MC: It’s always nice to see these TV relationships aren’t so shiny and perfect 24/7. At the same time, they’re the Jim and Pam in the show, so it’s hard for me as a viewer to feel on edge when there’s any drama.

MG: Again, a realistic development. Relationships evolve, and you must adapt your behavior accordingly. TV shows and movies often portray couples that exist harmoniously in the same workplace. It’s almost a cliché. Imagine if you were around your significant other that often. You’d feel suffocated too.

This bit of acting by @brettgoldstein in today's episode of Ted Lasso was incredible. The subtly. The look of revelation on his face. Priceless. pic.twitter.com/mVnjv196nY

Roy’s intensity sometimes blinds him to his faults. It was a refreshing and funny turn to see Jamie Tartt be the unexpected and unintentional hero by reminding Roy that sometimes you have to trust people and give them space.

IC: For most of the episode, Roy was also portrayed as kind of a bad guy. Not with any malicious intent, of course. But just unaware of how he was crowding Keeley. And it came from a place of love. So this was an intriguing angle to explore. A couple being around each other all the time — at work and home — is bound to lead to problems, maybe even more so in a relatively new relationship. Yet no worries: Roy’s status as pop culture’s favorite boyfriend is still strong.

JR: This episode is entirely about the importance of communication. Obviously, the Ted storyline is there, but also Nate and his parents/colleague/subordinate, Rebecca and Sam’s unwitting dating app bant(e)r, and the entire boot room crew.

But the Roy-Keeley storyline is a fantastic example of how you can explore relationship conflict. Roy’s realization that Keeley has made him the last to know of a problem, despite being shown as more than willing to listen and compromise, is very well-played all around. The reconciliation was also well-done. “I need more alone time” isn’t always easy for one partner to intuit, and another example of how important it is to not bottle things up.

Nathan Shelley! Does Coach Beard have to take the Wonder Kid’s phone away?

JR: I did not expect the Nate arc, but I will say that there were signs there in Season 1. We first meet him when he’s screaming at Ted and Beard to get off the grass, for example. In retrospect, that feels a lot like someone who takes whatever authority they have very, very seriously.

S1 Nate didn’t have much, and indeed he spent most of the year in awe of the situation he found himself in. But the shit-talk pep talk scene even felt a bit mean-spirited, if it weren’t played for comedy. There’s a reason Ted didn’t deliver the speech; from a manager, it would have been abusive. That’s the taste we got this episode with his speech to Colin.

The way Nate so quietly and with plenty of self-deprecation tries to call his dad’s attention to his success only to be chided is obviously a telling moment. But more telling: after Nate berates Will the kit man (offscreen, in a framing inviting the audience to imagine the interaction in disturbing terms), Will simply draws the blinds and goes about his business, as though he’s grown used to that sort of behavior from Nate the Formerly Great.

MG: In Season 1, we learned about Jamie’s daddy issues. Now, we’re seeing Nate’s. He’s searching for validation in all the wrong places: social media and from his emotionally unavailable father. Makes me wonder about his childhood. Jamie was a jerk from the start of the show. With Nate, we’re watching him slowly turn to the dark side. Frankly, it’s uncomfortable. This is setting the stage for one major meltdown. Will Coach Beard be there to save the day?

MC: He may have to! Could we bring Nate from the first few episodes of the series back? The character transformation is hard to watch, even if that’s much of the point, of course!

IC: One thing bothering me a bit in the Nate-Colin conflict is that we haven’t been reminded that Nate has a very real reason for hostility toward Colin. Colin (along with Isaac) used to bully Nate incessantly to impress Jamie. Maybe the writers are accepting that the audience remembers that from Season 1.

That’s not to excuse Nate’s behavior, especially when Colin takes the mature step of trying to have a conversation about it. And Nate’s reaction to Will is disturbing. We often hear that people who were bullied become bullies themselves, which Nate is demonstrating.

I do wonder if Roy will be the one to yell some sense into Nate with a well-placed “Oy!” That would be an interesting twist since Roy got Colin to stop bullying Nate.

MG: “Sometimes the best stew is the one you leave sitting on the stove overnight cause you fell asleep watching Citizen Kane after too many beers.”

IC: “FUCK!” Roy Kent — or rather, Brett Goldstein playing him — gives a simple curse word (the best one) so much versatility and meaning. Wonderfully done.

Hell is waiting for those three dots to resolve. #TedLasso pic.twitter.com/nOWp1J2GVc

MC: I’ll go with the full team crowded around Sam’s phone, frustrated by the typing and no response on the Bantr app from “Bossgirl”: little do they know it’s their boss!

JR: Roy shouting “WHISTLE!!!” rather than using a real whistle due to sensitive lips. Perfection.

Trent Crimm, The Independent was on the case after all!

MG: Trent Crimm of The Independent knows the truth! And he just caught Ted in a huge lie. Journalism at work, my friends. Did Nate rat Ted out?

I can feel it in my bones that this scene is gonna come back to haunt us. Trent asking for a statement and Ted lying to him is definitely gonna lead to something.
And I'm already stressed about it. #TedLasso pic.twitter.com/iOTfKLFx8f

MC: Ted opening up to Trent/the media about mental health — and perhaps the importance of therapy, once he surely discovers that with Sharon — seems like a potential thing later in the season.

IC: So we were a week early in voicing our concerns here. We should’ve known Trent Crimm, The Independent smelled a story. And he probably won’t let it go, especially if he senses that Ted isn’t being completely forthright or honest with him. If Ted has a breakthrough with Dr. Sharon, could that expand further with going public to Trent? Being candid about mental health and emotional struggles would definitely fit with what we’re increasingly seeing in sports culture.

JR: This was another interaction highlighting the importance of open communication. In this case, Ted wasn’t and it feels like the kind of thing that might come back to haunt him. (Or maybe it’s just a beat to note that he still has a lot of growth to do when it comes to being honest about mental health.)