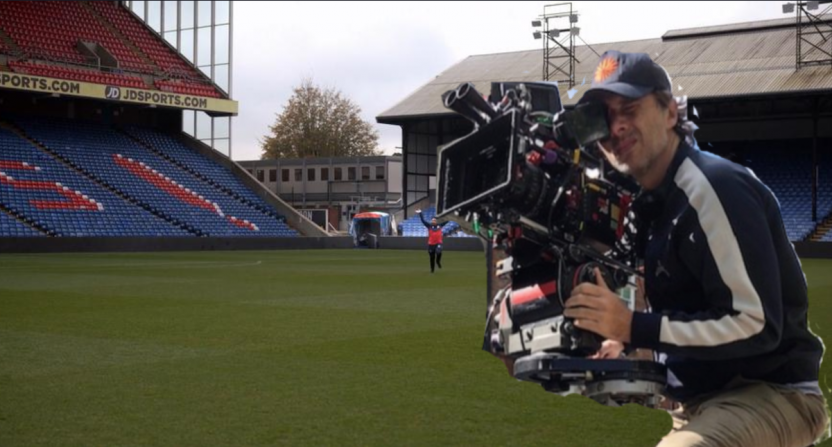 The soccer scenes in Ted Lasso haven’t been key to the Apple TV+ comedy’s success. But a level of authenticity when AFC Richmond is on the pitch certainly helps create the believable world that the show creates.

Zach Braff directed the second episode of Season 1, “Biscuits” — which earned him an Emmy Award nomination — and explained to Vanity Fair‘s Rebecca Ford that he was concerned about shooting the soccer sequences because he’d never filmed sports scenes in any of his film or TV work.

But those soccer scenes were difficult to film because the groundskeepers at Beaconsfield Road (AFC Richmond’s training ground) and Selhurst Park (the club’s home stadium, and the real-life home of Crystal Palace) didn’t want the production’s camera equipment on the grass.

“I get there and I’m just shooting the shit with the cinematographer and kind of talking about how we’re going to do it. And he goes, ‘Oh, and by the way, they’re so precious about the pitch and its perfection that we’re not allowed to bring any equipment onto this actual field.’ And I’m like, ‘What?’ They’re like, ‘Yeah, you can’t bring any equipment on the fields.'”

That’s probably not a surprise to soccer fans and actually a relief. (Baseball fans who hate seeing the fields at Fenway Park and Dodger Stadium, for example, get torn up by summer concerts surely wish their teams would exercise similar judgement.) Those fields are for soccer, a lot of work goes into maintaining them, and they shouldn’t be torn up by TV productions allowed into the facilities.

Fans of Ted Lasso might wonder if someone like former clubhouse attendant Nate chased Braff and his crew off the grass the first time they prepared for filming.

But Braff — best known as an actor from TV series Scrubs, where he worked with Ted Lasso co-creator and executive producer Bill Lawrence — has quite a bit of experience behind the camera in recent years on films including Garden State and Going in Style, and figured out how to shoot on those soccer fields without damaging the grass.

“We put this rig that had a remote head on sort of a rickshaw that was on giant rubber inflated tires that weren’t heavy. It’s a kind of thing they use on beaches, on sets, because you can roll it on sand. So, we put a remote head on that and it was light enough that they allowed us to put it on the pitch because it didn’t have an operator on it. The operator would operate from the sidelines and then the key grip put on cleats and he would sprint with it.”

If you’re a fan of Ted Lasso and Braff’s work, the entire interview is worth reading. Braff explains the pressure that he felt in directing the second episode of the series and helping to establish the visual look and style of the series, in addition to working as a filmmaker on a project which which he didn’t have an acting or writing role.