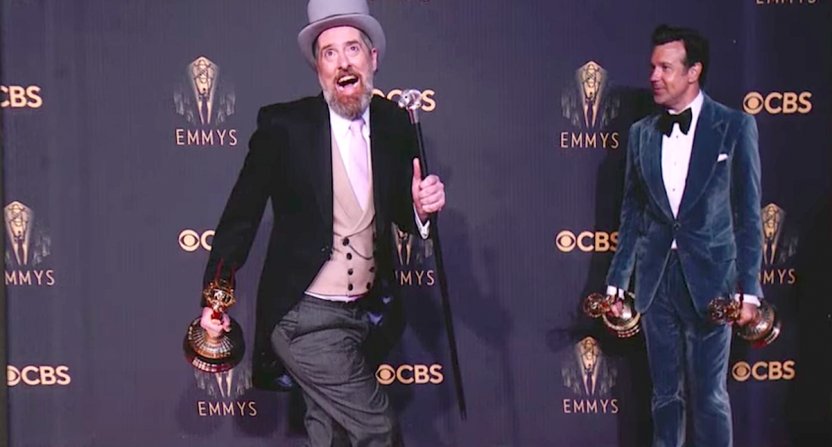 Fresh off Ted Lasso‘s big Sunday night at the 2021 Emmy Awards, Brendan Hunt — better known as the enigmatic Coach Beard — appeared on Jimmy Kimmel Live to talk about the show’s success, his English-themed outfit for the evening, and fellow creatives and celebrities he met during the evening, such as Moonlight director Barry Jenkins.

Oh, and during post-show festivities with the cast, Hunt also broke out the striped, sequined party pants that Coach Beard sported in “Beard After Hours,” Season 2’s ninth episode which debuted on Apple TV+ last week. What better time to break out those pants than during an Emmy Awards after-party?

Hunt went on to explain that Ted Lasso has been a dream job for him because he’s always had an affinity for London and British culture. That affection began with a summer job as a guide for an English-style double-decker bus tour in Chicago. As a 17-year-old, Hunt decided to pretend being British, thinking it would help him get the job.

With a fake accent and little else to his ruse but a thin backstory about his upbringing (no Green Card, no passport), Hunt successful worked the summer. But on his last day of work, someone finally caught on to his act and called him out.

Watch the entire interview from Jimmy Kimmel Live below:

Maybe Hunt will get an opportunity to relive that summer job in a Ted Lasso plotline. Though Coach Beard doesn’t have to fake anything as an assistant manager with AFC Richmond, maybe he’ll find himself in another situation where pretending to be British is the best move for him. But he’d better get his background and hometown straight.

Related: ‘Ted Lasso’ actor Brendan Hunt on the mysterious Coach Beard: “He’s probably had crazier times in his past”

And if you missed it, another Ted Lasso cast member appeared on Kimmel’s show last week. Brett Goldstein, who plays the universally beloved Roy Kent (and won an Emmy on Sunday), talked about beginning on the show as a writer, convincing producers he should play Roy, his love of cursing (especially swearing in front of children), and the rumors of being a CGI creation, which he definitively debunked here.

Now that he’s won an Emmy Award, Goldstein is even more interesting than if he was “Emmy-nominated Brett Goldstein.” If he’s found dead, the sentence will begin with “Emmy winner Brett Goldstein,” which is surely more compelling and tells people they should pay attention to the story.