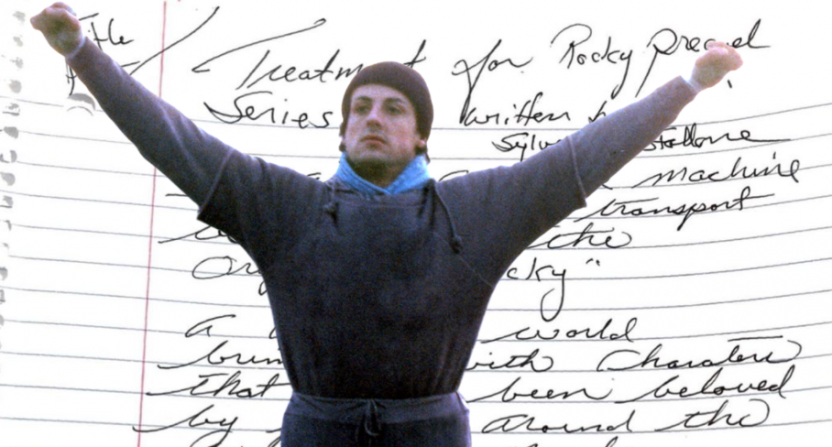 Is there a story to tell in the life of Robert “Rocky” Balboa before we were introduced to the character in 1976’s Rocky? Sylvester Stallone thinks there might be.

This week on his Instagram account, Stallone shared the handwritten notes for a “Rocky” prequel that he was inspired to write.

“I started out this morning by writing a treatment for a Rocky prequel for streaming,” Stallone said in the caption. “Ideally, 10 episodes for a few seasons to really get to the heart of the characters in [their] younger years.”

Basically, Stallone wrote out the entire concept for what this series would look like, presumably to pitch to producers and executives, before beginning to write a pilot script.

“Imagine a time machine that will simply transport us back to the origins of ‘Rocky,'” Stallone wrote. “A cinematic world brimming with characters that have been beloved by people around the world for nearly five decades.”

One of the first thoughts that comes to mind is that Rocky Balboa’s origin story was already told in the first Rocky movie. We were introduced to the future world heavyweight champion when he was a small-time fighter, working as a collector for a loan shark. He gets the break of a lifetime when world champion Apollo Creed picks a local fighter to challenge him after his original opponent bows out due to injury.

But Stallone’s prequel series would go back nearly 15 years when the boxer is 17 years old. Based on his treatment, he intends to use Rocky’s early life to take viewers through the 1960s, which he views as history’s most impactful generation.

“Climbing aboard that time machine will take us to the most transformative generation in modern history: The Sixties.

That is certainly ambitious. Stallone can’t be faulted for wanting to tell a story on a big canvas. How a teenage Rocky Balboa fits into all of this isn’t clear, though perhaps it shouldn’t be assumed that all of the events Stallone lists would feature prominently in the story.

For instance, it seems unlikely that Muhammad Ali wouldn’t really figure into the narrative. Stallone is probably just mentioning him as an icon of the time. But including Ali could be feasible. He defeated Sonny Liston for the heavyweight title in 1964. But later on, using Ali would complicate the story. He was the real-life heavyweight champion at the time Rocky takes place. Would Apollo Creed have beaten Ali to win the title?

Questions like this could be what makes a “Rocky” prequel series intriguing, however. As Stallone writes in his treatment, Rocky Balboa is a “lost soul” when we’re introduced to him. What happened in his teens and 20s to make him disillusioned? What derailed his dreams? Did Rocky try being a hippie?

Perhaps this is the equivalent of Stallone getting an idea in the shower or while he was sleeping and jotting it down before he forgets it. Maybe those creative wheels started turning when Creed III — which Stallone may or may not be involved with — was announced.

With so many streaming platforms now available and seeking original content, it certainly seems possible that a Rocky prequel series could be developed somewhere. And if so, it’s interesting to see the beginnings of that process. But it might also be worth asking if Stallone has told all the Rocky Balboa stories there are to tell.