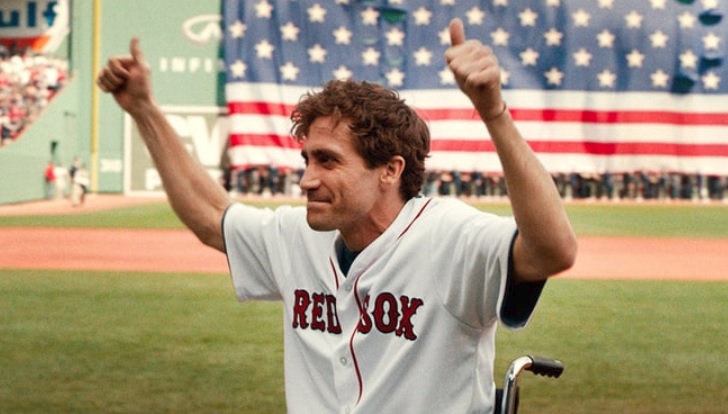 Just over four years removed from the Boston Marathon bombing on April 15, 2013, it’s completely understandable that some people might feel it’s too soon to relive those events. That’s surely especially true for those who were closer to the event, either experiencing it personally or just as a part of the general community shaken by the terrorist attack on the Marathon.

So even though I believe Patriots Day was one of last year’s best films (I didn’t include it on my Best Films of 2016 list because it wasn’t released nationally until January 2017), I get why people didn’t want to see the movie and it didn’t perform well at the box office. Many may have also felt that they already saw that story play out on the news in real time, so why watch a dramatization of events that occurred so recently? Those even closer to those events, of course, may not want to relive what happened. It was too familiar, too soon.

I presume that some will feel the same way about Stronger, the story of Boston Marathon bombing survivor Jeff Bauman, who lost both of his legs in the explosion and became a heroic symbol for the “Boston Strong” slogan of recovery and resilience in the region. Director David Gordon Green (working from a screenplay by John Pollono and Bauman’s memoir) don’t focus too much on the events of the bombing and the manhunt for the Tsarnaev brothers responsible for the attack. This is a much more personal, intimate look at how those events affected one person and those around him.

Bauman, played by Jake Gyllenhaal, was unfortunately in the wrong place at the worst possible time. Promising to be at the finish line to support his on-again, off-again girlfriend Erin (Tatiana Maslany, Orphan Black), who’s running in the Marathon, It’s established that the two have broken up, but still clearly have feelings for each other. Jeff wants to be at the race to show he can be there for her, which was the primary issue in their relationship. But he has the tragic misfortune of choosing a spot right next to where Tamerlan Tsarnaev placed one of the fatal bombs.

We see Tsarnaev pass by Bauman as something of a blur and the camera lingers long enough to remind us of what’s about to happen, but also to make it clear that Jeff caught sight of him before the bomb exploded. It’s very well done, though the tension of knowing what’s about to happen makes the sequence almost unbearable to watch. The fateful explosion is seen from Erin’s point of view as she nears the finish line, yet far away enough not to be affected physically by the blast.

In a movie full of powerful scenes, one of the most affecting shows how Erin learned that Jeff was hurt in the explosion. She had no idea he would actually be there, despite his insistence that he would be at the finish line to cheer her on. While at a bar to reorient amidst all the chaos, Erin sees a TV news report that shows the now-famous photo of Bauman being wheeled away from the carnage, his face covered in blood and ashes.

Ian at the Movies

The story does return to the bombing in the form of flashbacks — some of which are quite graphic in showing the injuries he suffered — depicting the PTSD that Bauman experiences throughout his ordeal. But those memories also represent him coming to terms with what happened to him and truly confronting the trauma he endured. Until he does that, he’s not going to be in a healthy enough place to devote himself to his recovery and renewed relationship with Erin.

That relationship is the focus of Stronger, telling an unconventional love story that depicts the various difficulties they went through beyond the obvious. As mentioned earlier, the two had a tumultuous relationship before the bombing, with Erin frequently frustrated by Jeff’s unwillingness to do much together as a couple, often preferring the company of his close friends and drinking buddies. In some ways, it’s a typical story of a man-child who won’t grow up. Maybe that was even harder to do after losing his legs when he depended so much on help from others.

But even if Jeff and Erin were brought back together by tragedy (and surely some sense of obligation on Erin’s part), the two always had genuine feelings for each other, which is what makes the struggle all the more painful. Stronger does an excellent job of demonstrating the kindness of others, the people who selflessly help those in need, who respond to situations many others would run away from. Some of the most touching scenes in the film result from seeing what those people do and their willingness to help Bauman.

Yet the movie also shows the passions and tensions that arise between family and friends. People react to tragedy and grief in many different ways. Most often, the people we lash out at are the ones we care about the most. And many times, such conflicts are made even worse because those involved won’t get away from each other when perhaps they should. Love creates obligation and commitment. Erin is devoted to Jeff out of genuine feelings for him, but also because he was at the Marathon finish line because of her. Bauman doesn’t have anyone else in his life who understands him the way she does.

Even his mother, Patty (Miranda Richardson), sometimes seems more interested in exploiting her son’s suffering for money and fame. Another fantastic scene in the film occurs when Patty schedules an interview with Oprah. Naturally, she’s incredibly excited to meet the woman she’s watched for so many years on TV, who — in her words — who helped pulled her through her own tough times. But Jeff can’t tell his story anymore; he’s emotionally drained from sharing and reliving the experience, of being told he’s a hero when he believes there’s nothing heroic about what he’s been through.

The ordeal of Bauman dealing with the loss of his legs might be obvious, but the film powerfully illustrates just how difficult that circumstance is. So many things in daily life that were previously taken for granted are either incredibly unyielding if not outright impossible, and Gyllenhaal impressively portrays that struggle.

Yet Jeff’s emotional anguish is a part of his story that a movie can tell better than a news report or feature. His personal space and privacy is constantly invaded by people wanting to meet him. Even if their words are kind and their intentions well-meaning, the burden those interactions create takes a toll. Appearing at a Boston Bruins playoff game might be inspiring to the crowd at TD Garden, but no one realizes what all those people, the noise, and flashing lights trigger in Bauman’s mind.

But Gyllenhaal’s performance captures much more than the physical. Bauman has a warped sense of humor that helps him cope at times, an example of his immaturity perhaps helping him. The movie is also unflinching in showing his irresponsibiilty and how he doesn’t always appreciate the kindness demonstrated to him. Only when he takes accountability for himself and takes his recovery seriously does he truly begin to find himself and accept everything that’s happened.

All of this can be tough to watch at times, yet it’s impossible not to root for Bauman (and appreciate Gyllenhaal’s work, which is going to earn him an Academy Award nomination) as he fights to regain some normalcy in his life while also coping — physically, mentally and emotionally — with something that no one should ever have to endure.

If you’re not affected by several scenes in this film — for example, when Bauman’s bandages are removed and when he meets the man who rescued him — you either lack that capability in your heart or maybe this just isn’t a story you want to experience. And that’s all right. But you’ll be depriving yourself of a powerful, touching film.