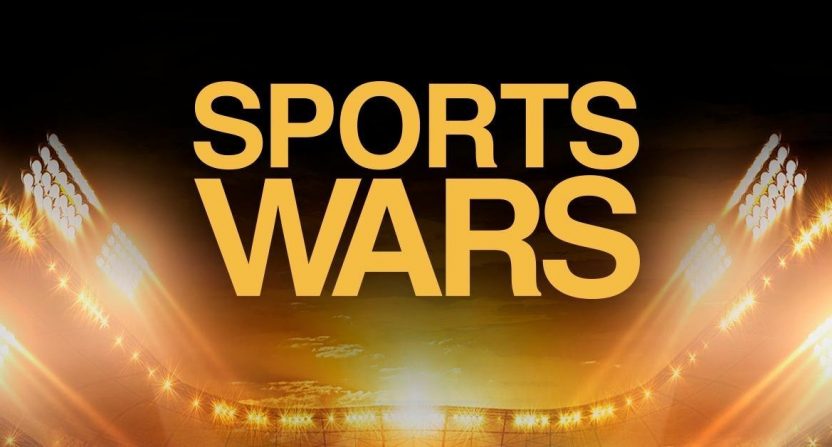 I’m hosting a new podcast for @WonderyMedia called SPORTS WARS, and I think you’ll like it.

The first episodes are up now (Favre vs Rodgers), so do me a solid and subscribe/review here: https://t.co/ZDeLRemfPZ

(or wherever you pod) pic.twitter.com/6tl1C8k2Mg

What’s It About?: Sports Wars offers an “immersive, courtside look at some of the greatest athletic rivalries of all time.” These could be rivalries between two famous athletes, rivalries between two teams over the years, or a rivalry between two nations culminating in an epic showdown for the ages. The show is made up of a collection of mini-series that detail what happened behind the scenes while some of the most famous (and infamous) rivalries played out before our eyes.

Who’s The Host?: Dan Rubenstein, whom you might know as one of the co-hosts of The Solid Verbal podcast as well as from his writing or videos with SB Nation and SI.com.

What’s It Like?: As of the time of this review, the initial seven-part series on the rivalry between Green Bay Packers quarterbacks Brett Favre and Aaron Rodgers has just completed and the series on the rivalry between tennis stars Roger Federer and Rafael Nadal has just begun. Presuming the Favre-Rodgers series is a representation of what future series will resemble, the podcast manages to walk the delicate tightrope between being in-depth and breezy. It would be very easy to bog down a show like this in minutiae and statistics and it would be very easy to make it superficially weightless. Credit to the team behind Sports Wars for finding a balance, which is a valuable skill in podcasts today.

Episodes are usually in the 30-40 minute range which is an ideal length to digest the information before getting bored. The show makes the extremely smart decision to release two episodes per week, which keeps the content flowing and helps maintain a nice flow from episode-to-episode. The show covers a lot of ground and often leaves as specific moments in time that call out for more, something the show is happy to provide within a few days rather than forcing you to wait a whole week.

Rubenstein is a genial host who keeps the momentum going throughout each episode. There’s polish on the performance but just enough that this feels like a well-crafted podcast without sounding overly serious.

While episodes do insert some real audio, it leans heavily on recreation for some of the more important encounters. Your mileage on those recreations will vary based on how much you’re willing to let that go. If that kind of thing is distracting to you, it is what it is. They wisely call attention to the fact that while they’re doing lots of research, they’re not saying everything that happens in those recreations or behind-the-scenes discussions is 100% accurate.

Who Is It For?: Certainly, this podcast is first and foremost for sports fans who are familiar with the subjects covered but who might be interested to find out what was going on behind-the-scenes or realize that there was more to the story than they remember. The show relies heavily on resources that are already publicly available, such as books and biographies, but have boiled down those stories to their essentials in an entertaining way.

Beyond that, the topics covered also provide a fun gateway for people who might not be big sports fans but enjoy listening to stories about fame, ego, talent, and rivalry and what happens when all of those things crash together and explode. Yes, the show chronicles sports stories, but just like so many things in this world, they’re really telling human stories.

Who Is It Not For?: Look, if you really don’t care about who Brett Favre is or why Roger Federer is so good at tennis, then this may just not be the podcast for you. Conversely, if you’re a diehard fan who has voraciously consumed every bit of media previously produced about the topics covered here, you probably aren’t going to learn anything new.

Where Should I Start: Wherever you start, make sure you start at the beginning of a specific series. So far, only the Favre vs. Rodgers series has been completed, so you might as well start with “Good Morning, Grandpa.”

However, if you can’t stand the notion of listening to stories about the NFL, start with “The Hothead,” which kicks off the Federer-Nadal rivalry series.

So, Should I Listen To This?: If your podcast queue is feeling a bit stale and you’re heavy on the true crime or long-winded interview shows, Sports Wars provides a palatable respite about fascinating figures in the world of sports and the stories that made them who they are. If you’re like me you’ll know the gist of what’s coming but you’ll be surprised to learn a few new things along the way. The show is certainly worth sampling if you’re a fan of 30 for 30 programmings but would appreciate a little more levity in the storytelling.