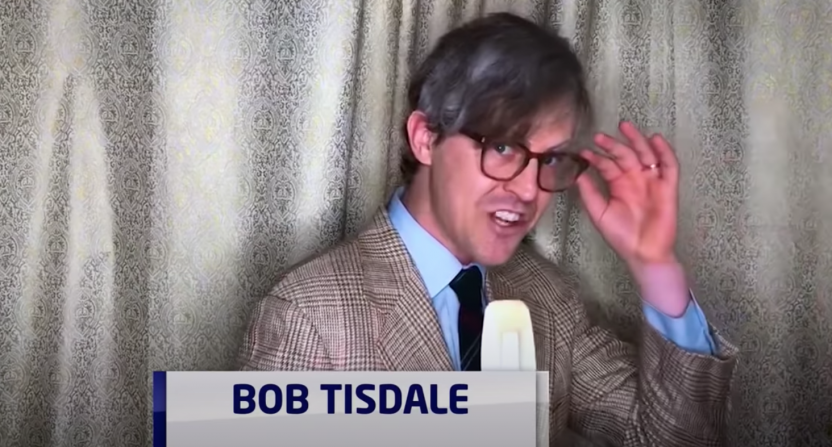 One of the prevailing storylines during the COVID-19 shutdown of sports has been play-by-play broadcasters attempting to occupy their downtime and keep those announcing skills sharp by calling random, mundane everyday events as if they were sports competitions.

Joe Buck has probably been the most notable, inviting video submissions from fans. His quarantined play-by-calls have covered dogs playing in a puddle, living room basketball, and crazy darts shots. The Oakland Athletics broadcast team got in on the fun (while the San Francisco Giants and Boston Celtics radio teams have called game simulations), as has BBC announcer Andrew Cotter.

Saturday Night Live spoofed this recent trend for its “SNL At Home” show this past weekend, featuring sketches filmed remotely from each cast member’s home. (Tom Hanks, recently recovered from COVID-19, was the surprise host.) In “Sport Report,” Alex Moffat portrays Sky Sports News anchor Bob Tisdale, broadcasting from his home using a spatula as a microphone and calling events such as which match burns out first.

That popcorn pop-off was surprisingly dramatic, teasing out the drama as each kernel heated up. Also, did you watch the crawl at the bottom of the screen with “Breaking News” like “Leaky faucet continues barrage against last thread of sanity”? Oh, the tension is so much more palpable when it’s relatable. Nicely done.

Saturday’s sketches weren’t filmed live, so Moffat and the SNL writers couldn’t have known that NBC (or more specifically, NBC Sports Network) would take a piece of Sky Sports programming off its schedule. Sky Sports News, which just debuted on NBCSN on March 1, is getting bumped in favor of some more NFL content leading up to the NFL Draft.

NBC Sports Football Flex premiered Monday morning in that 11 a.m. timeslot and will stay there during the foreseeable future. Though there are two weeks of programming to fill before the NFL Draft kicks off on April 23, pro football’s offseason is one of the only sources for sports news while everything else is on hold and could still be the one professional sport whose season doesn’t have to be postponed or canceled due to COVID-19 precautions.

But if the supply of real sports news runs out over the summer, maybe NBCSN can bring back Tisdale and his version of “Sky Sport Report,” rather than the actual Sky Sports News. No offense intended to the real-life Sky Sports, but can that show create the drama of two laptops racing to boot up? Also, we could get an update on those bananas ripening. The possibilities around the home are numerous.