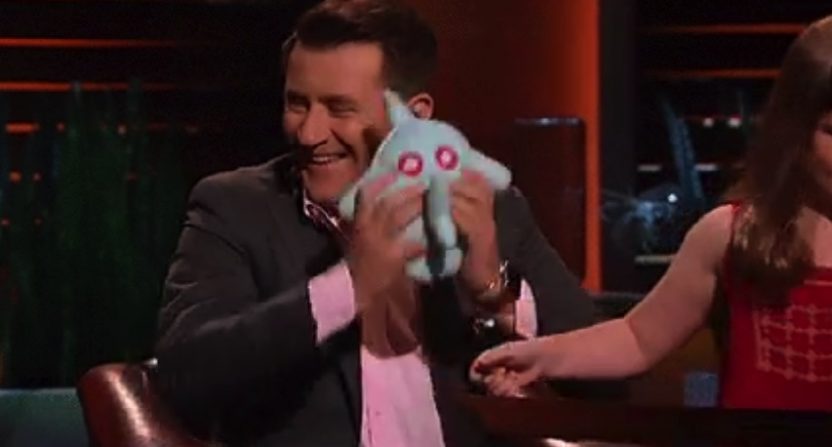 An MIT alumna with a successful product launch under her belt, Nanda’s entering a completely different space with her newest invention: Toymail.

“We want to connect parents to kids in the simplest way possible,” Nanda says: with stuffed animals that use Wi-Fi connectivity to serve as VoIP walkie-talkies:

This is great. What a pain-free way to keep contact with your kids, while not introducing all the problems of cracked screens and Internet safety. The units retail for $50, with a $20 cost to make, but potentially as low as $10 after they scale.

She’s already taken on $1.6 million in investment, though, out of a $10 million cap. Verizon is already one of her investors, and Amazon is another (chillingly, Nanda says Amazon’s considering building Alexa functionality into these). Adding $250,000 isn’t a lot of extra money and 2.5 percent is barely any equity. This smells like using Shark Tank as a marketing gimmick.

“You’re the real deal,” Robert says, but the equity is so low that it’s not worth his time. He’s already out. The other Sharks agree that this has serious potential, if they can work out a viable deal.

“Could you see this being a $100 million company?” Cuban asks, and Nanda affirms that’s where they see it going. Sacca loves the Nanda’s innovative tech and proven business acumen. He offers $400,000 for five percent. Nanda appreciates it, but wants to give the others a chance to jump in.

“I’m very confident in my offer,” Sacca says, “so I invite you to shop it around. I’m sure it’ll hold up.” Cuban, though, cuts in:

Oh snap, we haven't even hit the first commercial and Mark's already salting my game?
He can try, but I'm the obvious Shark for this. pic.twitter.com/MFGL0eREi7

He offers $500,000 for five percent, but he wants a little extra sweetener in the pot.

“I have over a billion dollars in content assets,” Mark says, and he wants first dibs on integrating his properties into these toys somehow. Lori wants to jump in, and Nanda immediately admits she’d love to work with Lori and her outstanding distribution capacity.

Sacca offers $600,000 for five percent — a $12 million valuation now! — with an option for Lori to come in and offer howevermuch cash for an equal portion of equity. Lori doesn’t want to settle for a measly 2.5 percent, though, she wants to split equity 3/2 for her equal $300,000 investment. Sacca’s having absolutely none of that, though, and the Sharks bargain back and forth while Nanda just stands there getting richer.

Swim or chum? “That went better than I could have dreamed!” Nanda says. SWIM.

Should you buy? I’m really intrigued by these. Two of my three kids are old enough to have their own phones, but we really could have used something like this a few years ago. At $50, it’s a steal compared to anything else that could do a similar job. Toymail gets a hearty SHOULD BUY.

“I used to be a plant serial killer,” Woltz says. Like millions of Americans, he’s cursed with a brown thumb. He created Edn Wallgarden for people like him — and busy city folks who don’t have the time or space to do real gardening. It’s sort of a Keurig-inspired take on a hydroponics system: mount it on the wall, drop in seed pods, plants come out.

But there’s… somehow more to it? Besides controlling the release of nutrients, it somehow… learns? Something? This is really not explained well.

“While this is operating, we can perfect the growth of different plants,” Woltz says $499 for a large unit, $99 for a smaller, “gateway garden” version. Pods are a $12/month subscription they have an 80 percent margin on, but fortunately you CAN load your own seeds and use it without the subscription service.

“The name actually stands for Environmental Data Network,” Woltz says, and again either he doesn’t explain this “intelligence” he keeps talking about, or we’re not treated to the explanation. Allegedly, Edn is monitoring and using data to optimize the growing environment for each strain of plant?

“Usually I’m the guy who asks ‘What’s the app,'” Sacca says. “This is one of those where I say, ‘Why the app?'” For once, Sacca doesn’t think the tech angle adds enough to be compelling — and certainly not to justify the sky-high product price.

Mister Wonderful randomly decides to jump in, after being skeptical at first. He offers $150,000 for 15 percent, which is a bit more equity but a very reasonable offer overall. But of course, when Kevin’s in on a product, Lori’s often in with a better deal.

Most of you don’t know this about me, but I’ve always had a fascination with hydroponic farming. #SharkTank #FunFact @ABCSharkTank

Lori offers $150,000 for a whopping 25 percent, but thinks she’s worth it because she needs to take over manufacturing. The product just isn’t affordable at $500, and she thinks she can get it down to half that. Kevin warns that his price will go up to match hers if Woltz doesn’t accept his offer. Woltz decides to hear Lori out, and Kevin makes good on his threat.

Now Woltz has two offers of $150,000 for 25 percent, neither of which he’s happy with. Lori’s not budging on her price, so he tries begging Kevin to get back down — first to the original 15 percent, then to 20 percent. Mister Wonderful won’t budge: if $150,000 for 15 percent is good enough now, it was good enough when he offered it.

Swim or chum? “When you get an offer you’re willing to take,” Robert says, “TAKE IT!” CHUM.

Should you buy? Like Mister Wonderful, I found that even Googling this product’s name brought up an ocean of much cheaper competitors and after this episode, I still have no idea why I’d spend many multiples more for Edn’s product. SHOULD NOT BUY.

“Our model is a paradigm shift in the hospitality industry,” Moati and Dass insist. This is for those who fly to another city for a meeting and need a home base for the day, but don’t need to spend a night there before they fly back home.

Why not just let them book for the day? With Hotels by Day, you get a place to prepare for and decompress after your meeting, and then you aren’t charged a fee when you choose not to stay the night.

Right off the bat, Mister Wonderful asks the key question: How can these guys be offering a proprietary way to book other people’s hotels?

The answer is unsatisfying: The entire hotel industry uses a standard booking system that assumes a nighttime stay. Their proprietary code searches for unsold night-stay inventory and reserves it for the day.

The @hotelsbyday guys can't explain what they can do that no one else can.
Also, they said "paradigm shift."
That tells me Ev. Ree. Thing.

“Why don’t the big guys crush you like the cockroaches you are?” asks Mister Wonderful? Whatever Hotels by Day is doing, code-wise, the hotels — or any of the many sites in the hypercompetitive travel-booking market — could also do. The Sharks start going out as the pair fail to explain how they can possibly keep being the only people doing this.

But there’s a bigger problem with the model: there just aren’t enough customers. Cuban breaks it down:

“What you’re doing is selling somebody else’s product,” Sacca says. “Every time I’ve asked you what kind of technical, defensible, proprietary technology you have, you’ve done a really terrible job of explaining it.” He’s out.

Swim or chum? “The Sharks did not give us a chance to explain,” Moati says. “Shame on them.” Um, they practically begged you explain like seven times, dude. You’re deservedly CHUM.

Should you buy? The niche, as Cuban explained, is very small. It’s a huge gain for a very small subset of people, and it’ll probably be served very soon by the massive companies that dominate that space. SHOULD NOT BUY.

“Coding is a golden ticket to a great job and a great future,” Chopra says, and he’s not wrong. Bitsbox is literally Birchbox for coding: You get a monthly sample app that kids can put together, along with explanation and suggested variations. Kids learn the real basics of real coding, but also get fun, functional apps quickly.

A $40 monthly subscription gets you a full box with many app cards, along with a toy that matches the theme. It’s currently about $10 to make, but they think it’ll be much cheaper as they scale. They launched less than two years ago, yet have done a whopping $1.3 million in sales. Even so, they’re “not cash-flow positive” yet, because they’re paying five top-notch programmers and designers.

They’ve already taken a $500,000 seed round of funding at a $4 million valuation, before they started selling. Mister Wonderful balks — their ask is an $8 million valuation. Why are they trying to charge the Sharks double? Their answer: they just think their company’s worth that much more now that the concept is proven out.

Lori’s immediately out, because she feels the other Sharks are a better fit. Kevin goes out, too. Chris Sacca, though, is completely into it. He offers $250,000 at five percent stake, at an $5 million valuation. But the entrepreneurs don’t want to shortchange their early investors by giving Sacca so much for so little.

The offers and counter-offers come quickly as Sacca, Lininart and Chopra go back and forth. The cash, equity stake and valuation are fluctuating up and down as they try to balance getting Sacca on board with respecting their other partners and getting a favorable deal.

Poor Grace is sitting there knowing she could do a better job of negotiating this @bitsboxkids deal.

“This isn’t malevolence,” Chopra says at one point, “it’s ineptitude!” Yet even after attempting to affirm they absolutely want to get a deal done, Lininart keeps sighing and waffling and ham-handedly counter-offering. After three last chances — two more than most pitchers get — it’s over.

Swim or chum? “For 0.25 percent,” Mister Wonderful exclaims, “they let it slip between their fingers.” CHUM.

Should you buy? Despite having been a computer programmer for years, and three kids who’ve all expressed interest in coding, I’ve never found a system that gets (and keeps) kids programming. Definitely SHOULD BUY.