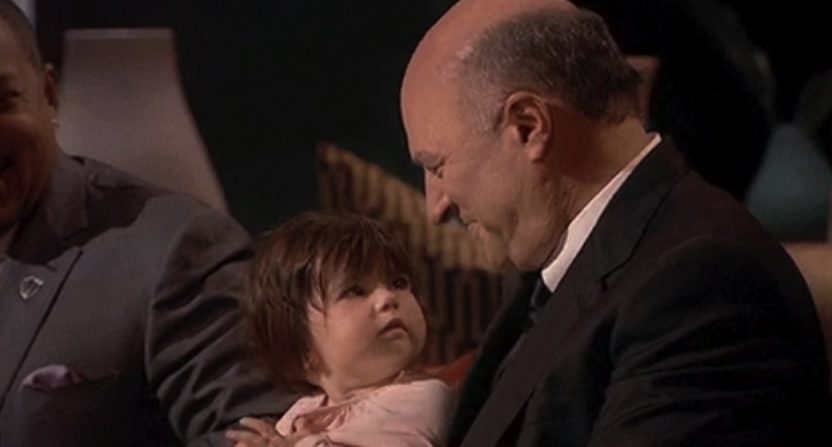 The Bait: A protein-shake shaker, fancypants play mats, portable potables and a rolling case of trouble.

Efferding, a pro bodybuilder and weightlifter who calls himself “The White Rhino,” starts off by showing the Sharks how powerful his pitch might be:

His Kooler is a modular drink cooler that’s perfect for protein shakes, sports drinks and the like. It’s also got a second compartment:

So far, he’s sold $120,000 worth. With a unit cost of $7 and retail of $35, he has a great margin — but a lot of it is eaten up by his intense travel schedule, hand-selling the units at fitness and trade shows.

Cuban asks what Efferding what his biggest challenge is, and he’s pretty self-aware about the difficulty of evangelizing his product:

Mister Wonderful likes Efferding’s brand, but doesn’t think it’s going to take off. Cuban sees the same thing; it’s ultimately a niche product he’ll have to sell by hand for a long time before it hits the mass market — if it ever hits the mass market. He’s out.

Efferding thinks the Kooler would be great for an infomercial, but Lori disagrees.

“Infomercials are very difficult,” Lori says. “Nine out of 10 fail.” People think of infomercials as a way to sell anything, but they actually have a pretty specific demographic — and The Kooler appeals strongly and specifically to not-that-demographic.

“I know it definitely doesn’t look like it,” Daymond cracks, “but I have a lot to do with fitness.” He’s previously invested in fitness-related Tank pitches. He offers the full $50,000, but for 33.3 percent, over twice the equity stake Efferding was offering.

Let’s take a step back for a second: It’s easy for Daymond to invest, because Efferding’s valuation is sensible. He’s not insisting The Kooler is going to be the next Nalgene bottle, or push Coleman out of business. Everything doesn’t have to be perfect for a Shark to bite. Frankly, I thought asking for a third of the company was a little steep.

But Efferding has a couple of business consultants with him:

Swim or chum? Apparently, the guns are fired up about Daymond’s offer. SWIM.

Should you buy? This looks like a well-designed product, but I’m not a protein-shake kind of guy. Are they supposed to be ice cold all day? SHOULD BUY, I guess?

Granados was appalled when she went to over to the house of her friend Marissa, “one of the most stylish mamas” Granados knows, and saw the beautiful flooring covered by “tacky, circus-colored” modular foam play mats.

Even scarier than non-fancy foam, though, is the concept of “Uncle Wonderful”:

Granados came up with the idea for customizable, fashionable, attractive play mats that won’t donk up the décor. She mocked up a prototype and pitched directly to Facebook mom groups, and received 4,555 inquiry emails. Since manufacturing began, she’s received $114,000 worth of pre-orders.

She makes the packaged flooring units for just $35, and sells them for $139. That’s quite the margin – but it’s also quite the price.

“How many families outside the Upper East Side of New York want to spend $150 for play mats?” Mister Wonderful asks. Granados wants to expand into Nordstrom’s and other high-end retailers where well-heeled mamas set up their baby registries. Uncle Wonderful thinks trying to get into retailers is the Siren song that lures entrepreneurs to their doom:

“I don’t think 95 percent of the country can afford that,” Daymond agrees. He’s out, too.

Granados makes a semi-desperate plea for Lori to get involved, but she’s not seeing a great opportunity either. It’s just too early, and there are too many questions left unanswered: How big is the real market for super-premium play mats? How competitive will she really be in a well-established product segment? How quickly will competitors ape her unpatentable concept?

“I just have to go with my gut and ask myself, ‘Is this the right investment for me?'” It isn’t. Granados seems heartbroken.

Swim or chum? “I have worked myself to the bone to get to this stage,” Granados says, but she’s just not there yet. CHUM.

Should you buy? I’m sorry, I don’t live on a planet where kid-toy-colored kid toys are a problem which I’ll peel off a few hundred bucks to fix. SHOULD NOT BUY. Also, “Little Nomad” is a deeply weird name for play mats.

I initially balked at the idea of a portable shower — what problem is this solving? — but as soon as they mentioned camping, I was in:

Crawford sold his pools-and-plumbing business (so that’s how he invented this thing and made it work so well!) for an initial war chest of $75,000, then sold 10 percent the business for another $75,000. Crawford’s since taken on Fagan’s company as a partner, and over half a million in debt.

But RinseKit got wrong what The White Rhino got right: Valuation. “You’re asking me to value it 18 times sales two years from now,” Mister Wonderful says, and woof:

Even at the ridiculously steep ask of $5 million for the whole company, Robert’s got an offer: $250,000 for 20 percent. Fagan immediately balks; he doesn’t want Crawford’s equity to dip below 50 percent. Crawford’s worked too hard to be a minority partner in what he’s built. That, the Sharks rejoin, is just business.

Mister Wonderful, despite the speech about valuation, offers $250,000 as a loan, in return for a five percent stake. As she often does, Lori jumps in to one-up O’Leary’s offer: $250,000 for five percent, plus the same royalties Fagan’s getting. She thinks maybe this IS a QVC kind of thing.

Daymond has an offer too, bringing us up to a whopping four Sharks in. He offers $250,000 for 7.5 equity — no debt, no per-unit royalty — but he also wants a special commission, and we want our first DRAMATIC COMMERCIAL BREAK.

Swim or chum? The last offer was the best. The partners SWIM with Daymond:

Now THIS is what I’m talking about. Innovation meets practicality. #SharkTank #RinseKit

Should you buy? This is really cool. It’s like a really cheap, light power washer that’s a lot more versatile and easier to use. SHOULD BUY.

“If you have a passion and won’t take no for an answer,” Elden says, America truly is the land of opportunity. His family emigrated from England when he was nine. When California banned plastic bags, he saw an opportunity to innovate.

Innovate, he did. His rolling case design looks incredible:

He claims he’s getting POs from Bed Bath & Beyond, Staples, Hobby Lobby, you name it. But he’s gotta come up with the money to fill them.

Making money really isn’t the issue. His blended gross margin is a whopping 50 percent. But despite over $2 million in sales, he’s netted only $200,000 in profit. Just as with Efferding, he’s selling these by jet-setting all over the country, and the costs are eating up his profits.

As they talk, it comes out: one of the big orders is from QVC. In fact, he’s been inventing products and hawking them on QVC for years!

Elden’s invented a lot of sellable products, but this is the first one that’s really taken off — and it’s really taking off.

Daymond offers $350,000 for 15 percent, and he’ll underwrite the manufacturing and warehousing for all future sales. If Alden sells a billion dollars worth of orders, Daymond says, he’ll make sure they all get filled.

O’Leary offers $350,000 as a line of credit at 18 percent interest in return for five percent equity. “You didn’t solve his problem,” Cuban says: shoveling cash into Elden’s money-burning growth furnace.

Sounds like it’s time for a DRAMATIC COMMERCIAL BREAK.

When we come back, Elden is sweating the decision.

“I would either like more money for a higher equity, or…” he sighs heavily. Daymond offers to make his decision easier — by going out. Elden counters Mark and Lori at $700,000 for 15 percent, but Lori and Cuban aren’t splitting 15 percent, certainly not for twice the money.

Swim or chum? He takes it! SWIM.

Should you buy? Get ready to see these incredibly clever carts at a retailer near you — and yeah, you definitely SHOULD BUY.