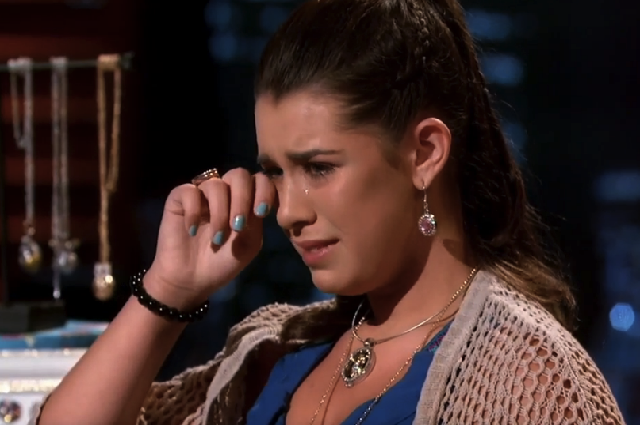 But here, we go swimming with the sharks. Let’s jump in! 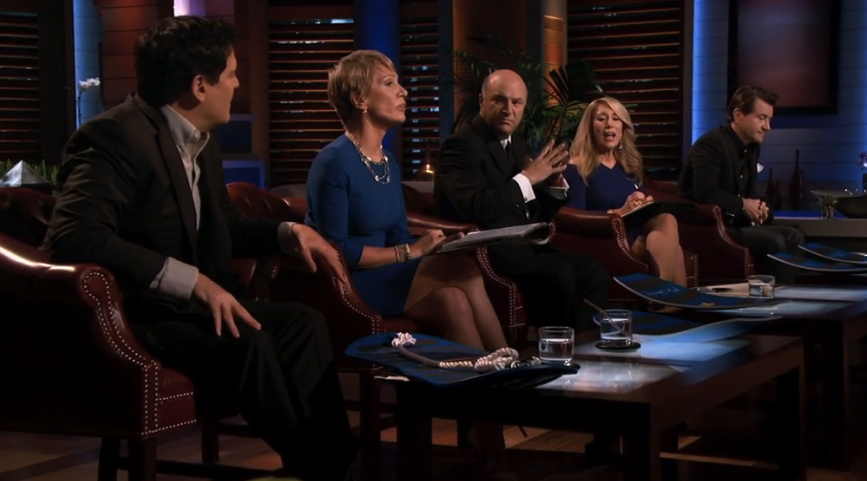 “Who doesn’t love frosting?” Nobody. Nobody doesn’t love frosting. Yet Saffer’s Non-GMO, vegan, all-natural product, which contains half as much sugar, attempts to fix what ain’t broken. A self-taught baker who attended “the school of Google and YouTube,” her first baking business was a total disaster. With a $4,000 loan from her folks, she got back on her feet, won Food Network’s Cupcake Wars, and can now boast about $170,000 in sales in less than a year of business.

Already into Wegman’s and Meijer stores across the Midwest, and about to enter Whole Foods, it sounds like Saffer is already spreading her less-sugary sweetness over America.

With boutique ingredients like “Madagascar bourbon vanilla,” O’Leary wants to know what Saffer’s margins are. She says 40 percent, which is a little low for something that has to turn around and sell at retail. Her boutique frosting also retails for $6.99, when the regular fat-and-sugar junk goes about a buck fifty.

When Lori asks if Saffer’s using her Food Network-winning recipe, Saffer says no, that was a butter-based recipe, but OH BY THE WAY, her Cupcake Wars recipes can be found in her published COOKBOOK, because sheesh:

“You are the definition of don’t know when to quit,” Robert says. Then he answers her opening question: HE doesn’t love frosting. “Love you… I’m out.”

O’Leary is a partner in Wicked Cupcakes, and he can sell her frosting through their pipeline. He offers $75,000 for a 33.3 percent stake, because O’Leary will need to kick Wicked some equity. (“No, you won’t,” says Cuban. Cue more Shark grumbling.)

“Okay, thank you!” says Saffer, in the gosh-thanks-but-lol-no-way kind of way, and the Sharks chortle heartily at O’Leary’s expense as we go to a not-very-dramatic DRAMATIC COMMERCIAL BREAK.

Barbara offers a $75,000/30% stake deal, assuming Lori will go in halfsies with her and get Dollop on QVC. Lori appreciates being included, but doesn’t think it’s a QVC product. Lori’s out.

“Who would you rather be in business with?” Robert asks. “Kevin or Barbara?”

#SharkTank fans, who would you partner with? #DollopGourmet

Swim or Chum? Barbara would. “Before today,” Saffer says, “Dollop was a one-woman show. Now, it’s a two-woman show!” SWIM.

Should You Buy? Science says GMOs are fine, but if you’re vegan or trying to cut down on sugar, you absolutely SHOULD BUY.

I’m going to go to Meijer and see if it really is more delicious than animal lard and processed sugar (because let’s be real, yum).

I’m left with a question: What was Saffer on the show for? She had her production and distribution locked down, was scaling, and was profitable. Why give up a quarter of the company for not-that-much cash?

Leiu hails from Hawaii, giving ABC producers a chance to show off some gorgeous scenery. Born in Vietnam to Chinese parents, Leiu’s family escaped the Vietnam War when she was four and emigrated to Honolulu.

Despite the idyllic setting, Leiu’s young life was “very tough.” Her parents, who gutted out a living as immigrants who didn’t speak the language, are Leiu’s role models. “Now,” Leiu says, “it’s my turn to take care of them.”

It's time to see what @CreaClip has for us! #SharkTank #CreaProducts #CreaClip pic.twitter.com/8aPJhWApbY

Leiu thinks her CreaClip hair-cutting product line just needs a strategic partner to go from online sensation to global phenomenon. Her pitch starts, ironically enough, by throwing her poor mother’s hair-cutting skills under the bus. With a CreaClip, cash- and time-strapped parents like hers (and, Leiu says, women who boldly cut their own hair while emboldened by liquid courage) can get a perfect cut every time. You just…

Oh, my God — what are you doing NO DON’T CUT YOUR HAIR ON SHARK TANK AHHHHH!

Leiu says users have cut checks for $550,000 worth of CreaClips so far. Her popular YouTube instructional channel is the primary driver of direct, online sales:

Herjavec’s parents also fled Communism, and he and Leiu share a Hamiltonian moment over their mutual background:

Robert wants to be in business with her, but he doesn’t think he’s the right partner. Neither do Cuban or Mister Wonderful. Barbara points out the same thing I wondered about Dollop. “I think this product doesn’t have room for an investor,” she says. She’s out.

Lori sees the natural potential here on QVC, and offers $200,000 for 25 percent. That’s a steep equity stake, because Lori thinks some of the products need reengineering. Leiu pleads her case with high revenues, and counters with 20 percent. Lori immediately turns it down.

Swim or Chum? “Lori, I came here, and I wanted you, so this is a dream come true. Thank you. I’m going to accept the offer!” CHUM.

Should You Buy? The bangs thing is aces, if you cut your own bangs. The auto-Rachel layering tool works great, too. Like Lori, I’m a little skeptical about the whole product line (lashes?!?) but overall, you SHOULD BUY.

Ugh. A Kid Business. These are so hard:

Yourself Expression is a customizable jewelry and accessory line with ZOMG A BAZILLION combinations. 15-year-old Shelby’s pitch is enthusiastic, and her 10-year-old “minion” Gordy has a few choreographed moments of being annoying cute sprinkled throughout.

Shout out to these young entrepreneurs. I love their vision and passion for their business. #SharkTank #YourselfExpression

The margins are healthy, and the kids want to grow into licensing, sports stuff, travel souvenirs, etc.

“That’s pretty astute,” Lori says, complimenting their accomplishments so far, and their vision for their path forward. Barbara thinks the crazy customization is eventually going to be a crazy liability.

“This is a nightmare of inventory management,” O’Leary agrees. He’s out. Robert begins a similar hey-you-guys-are-great-but-I-don’t-see-an-opportunity-here speech, and suddenly Shelby breaks down in tears. Mister Wonderful, the Sharks note, always makes kids cry.

Robert does a great job of comforting Shelby and getting the pitch back on track, but he’s out too. Cuban isn’t the only Shark who sees these kids as having a better business—or better businesses—inside them.

“People fail to realize,” Cuban says of taking on VC money, “your obligations change.” Once you take on investment, you have very grown-up expectations you have to fulfill. These kids have done great going it alone, but swimming with grown-up Sharks might actually sink them.

Swim or Chum? Everybody’s convinced the kids are headed for great things, but this thing is not great. CHUM.

Should You Buy? If you can’t walk through the mall without stopping at Claire’s, you definitely SHOULD BUY.

The Spooner, these dudes claim, is “the ultimate board trainer.” Whether you skateboard, snowboard, surfboard, or whatever, this board lets you practice balance and moves on any surface:

The guys are straight out of Board Dude central casting: tan, sun-blonded, shaggy, speaking in mash-ups of accents and slang. One has a small surf shop, because of course, and he experimented with wheeled and un-wheeled dry-land trainers until he hit on a design he could sell in the store.

Boom: They’re expecting to do $1.8 million in sales this year, 65 percent of which is through toy stores and specialty retail. They did the New York Toy Fair, which is a big deal, and got their foothold through Phys Ed programs around the nation.

The financials are impeccable: They’re making great revenue, all three guys are taking a healthy ($60,000) salary, the business has no debt or other shareholders, and they still stand to profit $400,000 off that $1.8 million.

Nearly all the Sharks, nearly all in unison: “What do you need the money for?”

The guys think they can bust out of the specialty niche—but O’Leary immediately says the New York Toy Fair is not niche. They must have had some big-deal interest. The guys admit Toys ‘R’ Us came sniffing, but were afraid they couldn’t scale up to that level by themselves. The Sharks nod appreciatively; many entrepreneurs don’t know their own limits. Herjavec tells them they’re living “the American Dream”… but taking on any Shark means their lifestyle will change.

Cuban shares his story about SurfSet Fitness: They came on the Tank, got an investment from Cuban, and as Cuban ramped up the business, they realized they wanted to stay easygoing Board Dudes and bought him back out.

Barbara cuts Cuban off and says she wants to make an offer! Naturally, it will have to wait for a DRAMATIC COMMERCIAL BREAK.

Meanwhile, Barbara has talked Cuban into going in halfsies; Cuban has a surf partner in San Diego already. OH, and Lori has an offer and everything is chaos:

Swim or Chum? Cuban gives them the ultimatum, and they do it. SWIM.

Should You Buy? This looks rad as hell. You SHOULD BUY.