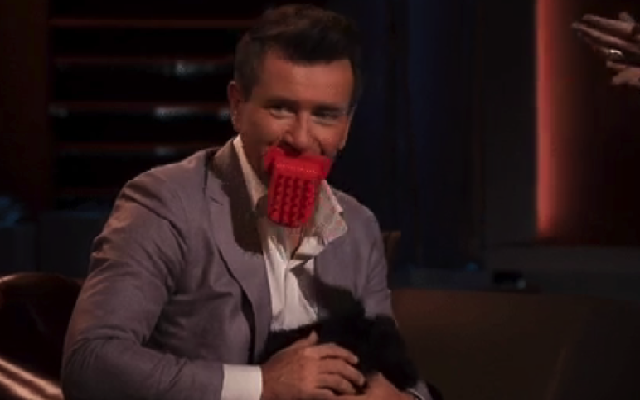 “The problem with pet toys today,” Jason begins, is that they’re bright and colorful and your cats get bored of them about five minutes after you bring them home. “Imagine instead,” Tara says, “you walk into a pet store and there’s an entire aisle of products dedicated to the wellness of their cat!” The young Portland couple’s toys, they promise, will “improve your animal’s lifestyle!”

One of their two products is the SHRU, a robotically programmed toy that’s sort of like a cat-toy Roomba: It wobbles around the room and activates your cat’s hunting instincts whether you’re home or not. But they have another product:

The Sharks are all of us, as they react to a woman with a Ph.D. in neuroscience putting a fake cat tongue in her mouth and licking a cat: NOOOOOOOOO. WHYYYYYYYYY.

“I want to take it seriously,” Mister Wonderful says, “because you asked for $300,000 before you put it in your mouth and licked a cat with it.” They claim over $300,000 worth of combined SHRU and LICKI Brush sales.

This is the interesting bit: The retail price is $119 for the mouse, $19 for the tongue. They have a very high-end niche product and a gimmicky clickbait viral thing. It’s hard to see a strong brand uniting the two ideas, and combined total sales for this year are just $180,000. So how on Earth can they value their company at two million dollars?

This is the True Shark Tank Fan Test. If you really get this show, you’ll laugh harder at her answer than you did at the rubber human cat-tongue prosthesis — just like all the Sharks did:

It’s the ultimate Shark Tank punchline. Everybody quickly goes out.

“My daughter and my son would say, ‘What happened to you, Dad?'” says Mister Wonderful.

Swim or chum? “Of course, everyone wants a deal,” Tara says, “but we have backup plans, we have a bunch of P.O.s, we’re going to be fine.” CHUM.

Should you buy? The SHRU is brilliant. The brush is silly. Both seem like good products for the money. You SHOULD BUY, but I still don’t see a whole aisle of PDX Pet Design products in your local Petco or PetSmart any time soon.

When Laura Dweck married Michael, she found out the ugly truth about a grown man’s underwear: Each pair is as stinky and embarrassing as his old college buddies, because they’re all the same pairs he had when he was actually in college:

Out with the old, in with the new — except, wait, a new pair of designer underwear will set you back $20 or more. A whole wardrobe’s worth of undies, socks and tees will part you from a few Benjamins.

Ten pairs of socks, three pairs of underwear, three undershirts and a pair of sweatpants for only $60. Laura claims they’re “fast, customizable and high-quality.” Robert says he’s “a little blown away” by the price, and Lori says the socks are the softest she’s ever felt.

Daymond, who of course seems like the perfect Shark for this, wonders why people who usually shop at big superstores and malls where packs of basics are sold would then go home and order online. Again, the answer is there’s no easy one-stop place to get all of it, and the quality and pricing of multi-packs is “all over the place.”

They launched 10 months ago and boast $351,000 in sales. But they’re still sitting on a whopping $397,000 in inventory. Turns out, they sank a quarter of a million of their own money into the company — and raised another three quarters of a million from VCs in order to finance a MASSIVE inventory buy that kept costs low.

The Sharks immediately want to know: How much of your business did you give up? The answer drops jaws: 75 PERCENT. These people are in the Tank with only a 25 percent stake in the company they founded.

On that bombshell, time for a DRAMATIC COMMERCIAL BREAK.

When we come back, it’s all over. Cuban rails them for starting with a great concept and selling it out before they even tried building the company. The other Sharks agree; Daymond says they got “wedgied” by the VCs:

The Sharks bat them around for a little bit, and both Kevin and Lori even put together offers. But as negotiations open, it’s clear the Dwecks don’t have the authority to make any deal they want:

Swim or chum? These poor people were CHUM before they jumped in the Tank.

Should you buy? Heck yeah SHOULD BUY, if you’re a dude or living with a dude.

A former Navy SEAL and sniper, Courtly also worked as a security contractor. But a good, strong cup of coffee is “better than getting shot at,” so Courtly started his own coffee company: Victory Coffee.

It’s a veteran-owned, veteran-run company that offers organic, fair-trade coffee in whole bean, ground, and even K-cups. His pitch is strong, but SOMEHOW he avoids the obvious kicker: “I love the smell of coffee in the morning. It smells like Victory.”

Side note: While searching for Victory Coffee stuff online, I realized George Orwell’s 1984 predicts a dystopian Stalinist future where everyone uses state-made Victory brand products — so YouTube is full of high-school English students drinking “Victory Coffee” and calling each other “comrade.” Oops.

Back to the here and now, Courtly offers the Sharks a blind taste test against your standard Anonymous Leading Coffee Company:

The Sharks love him, his vision and his identity, but right now the business model is a little unclear. He’s working on making big business-to-business deals, after struggling to make headway selling directly to consumers: Just $30,000.

Mister Wonderful challenges him on his coffee sourcing: He’s not buying beans and roasting them, he’s buying them from a couple of old Marine buddies who started their own roaster in Washington, D.C. At that point, it’s just a marketing brand. How are they going to scale?

The idea of hiring a bunch of veterans is phenomenal, but right now this product isn’t anything but a marketing concept. It’s no different than a bazillion other coffee brands out there right now, and relying on “you should buy this because America” isn’t going to beat Starbucks. But as all the Sharks go out, Robert offers a piece of advice we can all follow:

Swim or chum? Courtly says this adversity can’t compare to the life-and-death conditions he survived for all those years overseas. Nevertheless, he’s still CHUM.

Should you buy? If you like a strong cup of joe, and you care deeply about veterans having gainful civilian employment, sure: You SHOULD BUY.

I’m just going to let these folks tell their story:

“Multicultural children are now the majority,” Angelica Sweeting tells the Sharks, “but less than 10 percent of dolls represent them.” Naturally Perfect dolls reflect the physical traits of women of color, and the crying need for these products was reflected in their amazing Kickstarter results, where they doubled their goal in less than 48 hours.

Again, I’ll let Jason Sweeting outline their family’s experience in his own words:

Mister Wonderful used to be a major Mattel shareholder, and he knows the business well. As important as the product is, the business has to be there. Their current doll line sells for $85, with a cost of $35. That’s a very high-end price, and steep costs.

They’ve talked to big retailers, but the retailers want them to get the price down to $35 — their current cost to manufacture. Jason says they’re in talks with a manufacturer that can bring the price down below $11 with a big enough order, but it’s all too speculative for Robert. He’s out. Mister Wonderful thinks they can do it, but he’s “lived this life already.” Cuban loves their passion, but he sees too big of a disconnect between their passion and their accounting. He’s out.

There’s one Shark left: the only one with children who can understand the Sweeting kids’ struggles. Time for a DRAMATIC COMMERCIAL BREAK.

Daymond offers $200,000 for 33.3 percent — making the three of them all equal partners. After all of the harmony and good vibes, the Sweetings still ask Daymond to come down on equity a little bit. He wants to know why they want wiggle room, and Angelica has an answer:

“We’re selling more than just dolls,” she said. “We’re selling tools of confidence, tools of self-affirmation. One of the most important things about our Kickstarter is that it wasn’t just an African-American thing. We had Asian moms, Indian moms — everyone contacting us — yes, even dads saying, hey, we want a doll that looks like our culture, something that represents our daughters.”

“Let’s do this wiggle room,” Daymond agrees. “I’ll take 30, you guys will take 60, and 10 percent goes towards come kind of charity” that would promote diversity and inclusiveness.

Swim or chum? In one of the most heartwarming deals ever sealed on Shark Tank, the Sweetings SWIM.

Should you buy? These are great dolls, and they reflect what most kids look like these days. If you have children who play with dolls, no matter what color their skin, you definitely SHOULD BUY.