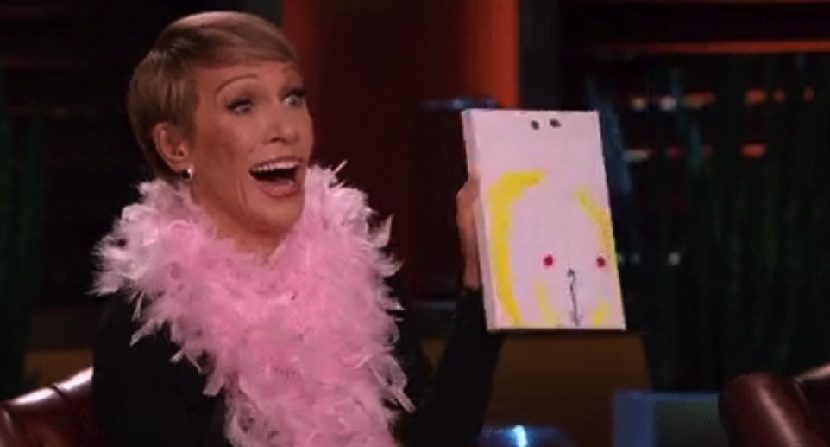 My first reaction to Wine & Design is: I’ve seen this before. As the entrepreneurs admit, a wine-encouraged art studio where regular folks can go to get a little creative and a little tipsy are all over everywhere.

But Wine & Design has staked out a big hunk of this market for themselves — and they’ve shipped in a big hunk of man for their pitch:

As the boa-wrapped Sharks follow their instructor in doing a little life painting, they’re having lots of fun. But can they make lots of money? Oh yeah: The Millses claim they’re the No. 3 chain in the country, with 41 franchisees, some of whom have multiple locations.

They project a whopping $12-13 million in gross revenue, with several hundred thousand of that in profit:

Their time of explosive growth has already happened. Now they need a cash injection to start fighting the long grind against the top two chains — starting the 20-year project to become the Subway that eventually topples McDonald’s and Burger King.

Lori is not here for that. She’s out.

Mister Wonderful puts a very Mister Wonderful offer on the table: $150,000 in cash, plus a $350,000 line of credit (at 12 percent interest) in return for a 10 percent stake in the company. Robert takes a shot at the structure of the deal, and Kevin invites him to do better. Robert says he will, and we have a DRAMATIC COMMERCIAL BREAK.

LOL some followed the directions better than others 😉 #SharkTank pic.twitter.com/rwXBX7hGow

When we come back, Robert’s explaining that he understands how hard it is for entrepreneurs to try and pull income out of a successful business. His offer is very straightforward: $500,000 for a 33.3 percent stake. They get a half-million cash to enjoy forever, and an equal partner for the business.

Swim or chum? Apparently because of Kevin’s existing O’Leary Wines business, they SWIM with Mister Wonderful. I think that partnership adds more value for him than it does for them, though…

Should you buy? There’s a competitor near me and if you’re not going for their bachelorette-party package, I’m not sure what, if any, differentiation there is. But if this sounds like a good time for you and your friends, sure, SHOULD BUY.

“Nooootebooks of the fuuuuture,” these two jumpsuit-clad entrepreneurs intone, and I’m a sucker for retrofuturism so I’m into it. It’s really just a regular notebook, they initially claim, but the Rocketbook app is programmed to automagically scan and upload whatever you write to preconfigured Google Drive folders.

This is cool if you really prefer that pen-and-paper feel, but why is there a separate pen and book? Wouldn’t this app work with any old notebook? Maybe, but here’s where things get wild:

Incredibly, the notebook erases itself in the microwave, so you can use it again and again. The Sharks are as impressed by the technology as they are flummoxed by the business model: The point of selling a razor is to keep selling razor blades forever. How do they generate sales when selling one book is all you need?

“Because it’s awesome,” they explain, and I mean, hey, it is. But one by one, the Sharks start dropping out: It’s too gimmicky, it’s too expensive, it’s not expensive enough, whatever.

Swim or chum? Cuban, the last Shark, sees the microwave trick as the only selling point. He doesn’t see it. CHUM.

You when the Sharks all said "I'm out" #SharkTank #Rocketbook pic.twitter.com/Ey69G8hpxx

Should you buy? This is tough to say. I’m a very digital person and I would have less than zero use for this. But I have a daughter who draws so much she’s levelling whole forests. Maybe I SHOULD BUY — and according to the company’s Twitter feed, they did gonzo business after the episode aired:

“Laid Brand helps you get noticed,” Roush says, and “noticed” wasn’t how I thought he was going to finish that thought. “With pheromones!”

Is anyone else sick of the word pheromone? #SharkTank #LaidBrand

Pheromones are real, and science has proven humans respond to different human scents in interesting ways. But as this article from Smithsonian Magazine reports, hot sexy sex pheromones that make you irresistible have never been found — and even if they were, they wouldn’t override all the other input we get about whether or not we find a person attractive, and even if they did, that would probably be illegal.

So A) we know “Laid Brand” doesn’t work as advertised, and B) if it did, it would be illegal.

But hey, at least their valuation is reasonable! Roush goes all-out on what a “Laid Brand girl” does:

“Would a woman want to be a ‘Laid Brand’ kind of girl?” Herjavec wonders, and apparently the pair went through several pilots and formulations trying to nail down whether it would work best targeted towards men or women.

That’s, uh, why they have a super guy-sounding name, brand and packaging, but are marketing it as a women’s product? This is a mess, and the Sharks aren’t vaguely interested. The last straw? Lori sprayed it on Kevin and he was still Kevin:

Swim or chum? The only notable takeaway from this pitch is Roush, who put his heart and soul into every goofy word. CHUM.

Should you buy? Absolutely SHOULD NOT BUY.

You’re going to need to get the tissue paper for this one. Um, for more than one reason.

Stenlake, from the picturesque Poconos, has worked in the bridal industry for years. Her product, Bridal Buddy, is one she had sketched out in her mind for a decade — but from what she strongly implied, her own groom never thought her idea would amount to anything.

Now a single mom, Stenlake is all-in on her idea, and it definitely solves a problem many brides encounter: How in the heck are they supposed to pee?

Traditionally, the bridesmaids are supposed to help with this — and my wife reports that yes, her bridesmaids answered the call of duty to help her answer the call of nature — but this is at best inelegant and at worst traumatic.   Stenlake shares horror stories of bridesmaids manually ripping open Spanx, brides wearing garbage bags under their gowns, etc.

But the prototype sheer slip she made back in 2002 wouldn’t be realized for another 13 years… and here’s where the story gets tough.

I have to say, her ex-husband does not come across well in this.

But as inspiring as her rags-to-satin story is, her difficulty getting into David’s Bridal and other specialty shops makes some of the Sharks nervous.

They start to go out — but that’s when Stenlake’s model and co-pitcher, Marissa, stands up and delivers the most stirring (and successful) emotional appeal the Tank has ever seen:

Wow. Get you a friend who will show their underpants to the international community for you.

In fact, Marissa’s speech is so effective, some of the Sharks start thinking she’s the key to making it work. Kevin and Lori start whispering, and come up with a way to leverage both the infomercial-y nature of a problem-solving gizmo and O’Leary’s extensive suite of wedding-adjacent businesses: A four-way equal partnership between the two Sharks and two pitchers.

That’s when Barbara decides to jump back in. Stenlake’s struggles remind her of the heartbreak that launched her billion-dollar empire:

Barbara offers $75,000 for a 33.3 percent stake, which would make it a three-way partnership. More equity remains in Stenlake’s hands, then, but she only gets one Shark (and one who might be more passionate, but has fewer retail connections).

It’s a dangerous situation: Stenlake has two solid offers, and Robert points out the clock’s ticking. For all the emotional touchy-feely stuff, though, she impressively decides to counter Lori and Kevin’s offer at 30 percent:

Swim or chum? “I don’t believe it!” Barbara is stunned when Stenlake picks Lori and Kevin’s deal. SWIM, and the two friends thanking and congratulating each other afterwards is a treat to watch. This is why we Shark Tank.

Should you buy? Obviously, this one isn’t for me, but if you’re going to spend anywhere from hundreds to thousands on your wedding dress, you should definitely peel off $40 to make sure you can wear it comfortably all night long — without a garbage bag or beer bong tucked up in there. SHOULD BUY.