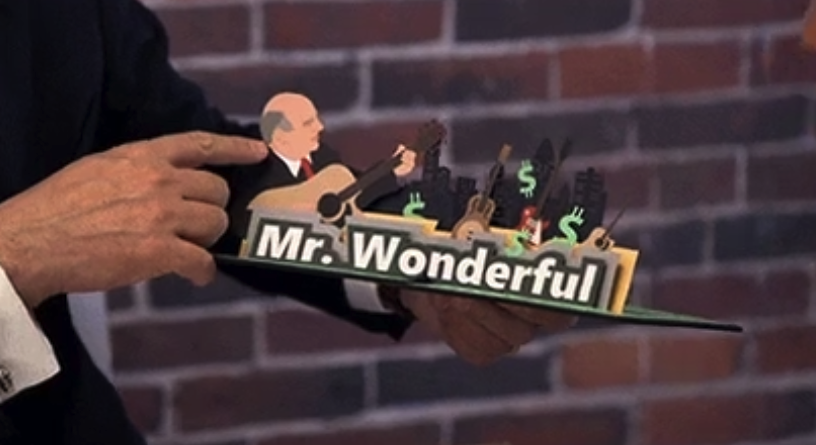 We're all afraid of perspiration showing through our shirts. With this business, it's no sweat! #SharkTank pic.twitter.com/LvkjWu9ejt

“This sucks,” says Choi, and he points to a massive pit stain under Thompson’s right arm. “This does not,” he adds and points to a perfectly dry left pit. How are they keeping Thompson sure? Thompson Tee, a sweat-defending undershirt that comes with a 30-day sweat-free guarantee.

It was even reviewed by Tank alum Aaron Marino, who In the Season 7 finale pitched one brand and got a deal on another:

“Inside the inner layer is a medical-grade film,” Thompson says, an absorbent polymer not unlike diapers and maxi pads. Thompson claims while just over one percent of people sweat like crazy almost all the time, 35 percent of the population sweat a lot more than most a lot of the time.

They make a traditional-fit tee that retails for $24.99 online, and a slim-fit for $29.99, all on about an $8.50 cost. Year-over-year they’ve sold $90,000 worth—then $500,000, then a million, two million and this year they’re tracking towards $2.6 million in sales. With some Shark capital they can bring all the manufacturing and inventory in-house, to what benefit it’s not entirely clear.

The retail inventory space is a dangerous game. Avoid it at all costs, entrepreneurs. #SharkTank

“I normally would say you’re crazy” about the valuation, Daymond says, but he’s actually fine with the $10 million number. Reinventing the wheel just to be able to carry all the costs of manufacturing and inventory, though, is what sounds nuts to him. He’s out.

Cuban says they’re really not a T-shirt company, but a marketing company, and that doesn’t bode well for their prospects. He’s out.

Robert, whose not-too-sure pit-stain pic was already used as blackmail, has come around on the size of the market and the potential sales. He offers $700,000 for 25 percent, cutting the valuation from $10 million to $2.8 million. The entrepreneurs’ stone-faced responses prompt Lori to jump in.

Or more accurately, dip a tentative toe in.

“I love you guys,” she says. “I like the product, but I’m out.” And on that bombshell we have our first DRAMATIC COMMERCIAL BREAK.

I liked the product but I have to get excited about products I invest in. #SharkTank #ThompsonTee

“Gosh, my offer looks so much better now!” Robert says, smiling. The guys want to know what direction Robert wants to take the company in, and he basically says he likes them and wants to help them be the best them they can be.

Mister Wonderful throws out the usual O’Leary deal: a $700,000 loan, payable at 18 percent interest, with a 7 percent stake. In the company.

Swim or chum? Thompson and Choi trade nervous glances. Thompson rubs his hands together nervously. He exhales nervously. He points at Robert. “You’ve got a deal!” SWIM.

… Hey, did you notice something?

Robert asked for a huge stake in the company at a much lower valuation than the entrepreneurs originally offered. For some reason, it never occurred to Thompson or Choi to counter. As they turn to walk away, Daymond says “He’d have taken 20 [percent].” Oops.

Should you buy? Uh, yup. As a large hairy man of Italian descent, I SHOULD BUY. Your mileage may vary.

The pitch begins, “You’re thinking, ‘These guys are crazy for thinking they’re going to get that valuation for a belt buckle.'” Yes, I say out loud.

“Yes,” Cuban says out loud. But as these brothers lay out their cowboy-inspired credit-card-holding-belt-buckle pitch, it’s clear they’ve built a better mousetrap. I use a metal money clip, but it takes a toll on plastic cards. The tension bands in the Wallet Buckle seem better for both speed and security. But uh, they’re laying it on a little thick.

“I’ve never seen anybody laugh at their own pitch so much,” Daymond observes, and indeed the guys have a big sense of fun. Their rodeo-cum-rockabilly vibe is something less than authentic (Justin is wearing lederhosen with his chaps), but more than cheesy.

By going to concerts and festivals and they’re hand-selling these buckles by the barrel. After about 18 months, they’re on track to sell $800,000 worth this year. Their cost is around $5-7, with prices from $49 up to $90.

But, um, how on Earth are they going to sell enough to get up to a $10 million valuation?

It could be a good idea but this valuation is out of control! #stopthemadness #SharkTank

“I’ve never heard of Buckle,” Lori says, which shows how often she shops for jeans in malls. In fact, that space is such a natural fit that they’ve opened up a mall kiosk, are about to open another, and have plans for as many as 40. They also bought a tour bus, to help them drive around and sell at festivals and stuff.

Does all this sound like a lot of hard, expensive work to sell in not-huge numbers? Yeah, it sounds that way to Mister Wonderful, too. He can’t get on board with a valuation that’s “16 times what you’re gonna make in a good year.” He’s out.

Daymond knows from experience that build-a-better-mousetrap belts and buckles don’t sell unless there’s a salesperson who’s demonstrating and evangelizing. There’s just no good way to scale it.

Is this a comedy show or pitch? Either way I’m loving it. #SharkTank

Swim or chum? Lori just thinks the product is too niche. She’s out. CHUM.

Should you buy? You know… I was about to give these a SHOULD BUY, but unless you want to invite folks to kiss your country ass, advertise that you are in fact a beer-drinkin’ babe or brand yourself an “INFIDEL” in both English and what appears to be Arabic, you are not going to have a lot of options.

“What do you think when you hear the word ‘Afghanistan’?”

It’s an interesting way to start a pitch; images of war and famine scroll across their screen. But there’s a purpose: These three Afghan War vets have come together to Afghanistan market its secret treasure: saffron.

Saffron’s an extremely floral, intense spice that’s harvested from flowers. Its labor-intensive production makes it rare and expensive; Rumi Spice retails for $18 a gram. As they point out in their own video, growing saffron for Rumi Spice provides a similar price point (and a much bigger share of the take) compared to growing opium poppies for the Taliban:

“We are at the high end of the market selling a premium product,” Miller says, and they want to build a high-end brand. They’ve racked up $400,000 in sales so far, projecting $750,000 for the year. The total U.S. saffron market is about $60 million, Yung claims, and offering the only single-origin fresh product on the market has real potential.

They’re already being featured in Blue Apron and by chef Daniel Boulud. Miller and Yung went to Harvard Business School after West Point (SHEESH, SERIOUSLY?), and their well-honed instincts for partnerships and brand-building are clear.

I’m intrigued-the product’s interesting & some of my best investments have been Veteran founded companies! @BottleBreacher @teamruckpack

“I’m a huge foodie,” Lori says, and compares saffron to her love for truffles. She loves truffle everything, and everything truffle. She loves the entrepreneurs, she loves the hustle, but she actually does not love the smell or taste of saffron. She’s out.

Mister Wonderful starts pressing on some of the numbers, and Yung throws out a ballpark of “five percent” net profit, which was a shot in the dark and O’Leary knows it. He excoriates the trio for not having all their numbers together, especially as Harvard grads.

“You guys are the guys who know this stuff,” Yung says, “that’s why we’re here!” She also makes a good point, that startups are much more concerned with gross revenue and burn rate, not cutting costs to maximize profit. Cuban’s on her side.

Swim or chum? “Mark, we’d like to accept your offer.” SWIM. “Striking a deal with Mark Cuban is a game-changer,” Miller says, for them and all the Afghani workers they’re partnered with.

Should you buy? They’re building a luxury brand around a luxury good and as they said, commercial saffron in the U.S. is crazy expensive and not very good. If you’ve been looking for a quality source here, you SHOULD BUY.

A traumatic birth experience didn’t stop Peoples from achieving his dreams of becoming a fancy restaurant chef — but his rags-to-riches story inspired him to work at a rescue mission, cooking for those who need a hand up.

“I wanted to feed people who were hungry,” People says, “not just for food but for opportunity.” To underwrite the free food he makes for whomever shows up, he runs a catering business out of the same kitchen with people who are in the late stages of an addition-recovery program.

Cooking a lot of meals with a shorthanded staff, Peoples got tired of juggling and cleaning all the utensils and bowls needed to accomplish simple tasks like washing vegetables and separating eggs:

This entrepreneur wants to simplify your cooking experience! ?#SharkTank pic.twitter.com/g0HEJYgC8q

Peoples whips through a lightning-fast memorized pitch, showing off his “scooping bowls,” patented mixing bowls enhanced with a sort of curved squeegee. You can mix, strain, and scrape a bowl clean of ingredients with a built-in handle.

The pitch is extremely infomercial-y and almost immediately, the Sharks start jumping in with Ronco-style lines (which Peoples, half the time, was just about to deliver):

The other Sharks see this is the perfect deal. They all agree to quickly bow out for reasons: Cuban doesn’t cook. Daymond says there are too many gadgets out there. Robert just flat says he’s out. Lori’s deal is the only deal left, and they’re all urging him to take it.

There is awkward silence.

“Lori, would you consider a royalty?” he asks, and everyone winces. He believes in his product, and doesn’t want to give up so much equity. That said, he admits he knows “a partnership with [her] is priceless.”

Lori gently explains to him that when she was getting started with her earring organizer, she’d go into JC Penney and hand-sell 100 a day. His inability to get sales means she and her team are going to have to put a lot of effort into making it work — and she’ll need serious equity in return. She re-states her offer and gives him one last chance to think about it.”

“Just a reminder,” she adds. “I make millionaires. That’s what I do.”

Swim or chum? “Sharks, I want to let you know, I’m going to make this deal.” He STILL took too long to accept, but… SWIM.

Should you buy? Yeah… I’m with Daymond. There are a lot of handy-dandy cooking gadgets you buy and never use, and I don’t bake enough to make egg-separating and batter-scraping a high priority. I don’t see these truly replacing a kitchen’s worth of implements, and so you SHOULD NOT BUY.