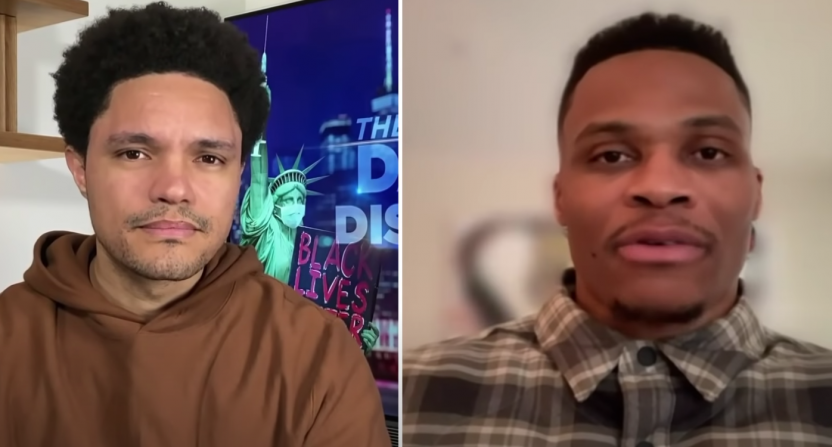 Washington Wizards guard Russell Westbrook appeared on The Daily Show with Trevor Noah Thursday night to talk about the documentary on the 1921 Tulsa Race Massacre he’s producing. According to Tulsa World, producers announced that the two-hour film will air on the History Channel this spring, coinciding with the 100th anniversary of the tragedy.

“Being in Oklahoma for 11 years, I was able to connect with the people and the history of the community,” Westbrook told Noah. “I’ve been able to travel to Tulsa, up and back, through my years there. I didn’t know anything about the Tulsa Massacre, about Black Wall Street until I got there.

“And once I heard about it, I was in shock. I was surprised that nobody, especially our African American communities, people that have Black-owned businesses, don’t understand and then understand the impact that the Massacre had on the world and how it can change our future.”

You can watch the full interview below:

Noah and Westbrook also talked about the NBA star’s Why Not? Foundation, which began in 2012 to fund school programs geared toward computer literacy and technology for Black students and has since expanded its reach to aid Black-owned businesses.

“I wanted to find ways to enhance the foundation and find different avenues,” Westbrook explained. “We’ve been working in tech, workforce development, working on the mental health and mental wellness side as well.”

Mental wellness and recovery have been important issues for Westbrook in his own basketball career as well. Former teammate Alex Abrines revealed a couple of years ago how Westbrook realized the difficulties he was having and tried to make him feel like he wasn’t going through his experiences alone, inviting him out to dinner or a movie.

Stories like that made it funnier when Noah said that a friend of his thought Westbrook was “an asshole” because of the way he looked and behaved on the court. That would’ve been a hilarious way for Noah to begin the interview.

“Hey, people think you’re an asshole. But here’s all this good stuff you’re doing for Black students and businesses through your charitable foundation.”

Westbrook isn’t having his best NBA season by any view. Bradley Beal’s outstanding play might have something to do with that. But his 18.9 points per game is his lowest scoring average in 10 seasons, while his .406 shooting percentage will be the second-lowest if it doesn’t improve. And in an era where three-point shooting is at a premium, Westbrook is shooting below 30 percent from long-range.

Westbrook’s numbers are a portrait of a player in decline. But he’s creating a legacy and identity beyond basketball and Noah bringing a spotlight to those efforts, informing an audience that might not be aware otherwise, is commendable.