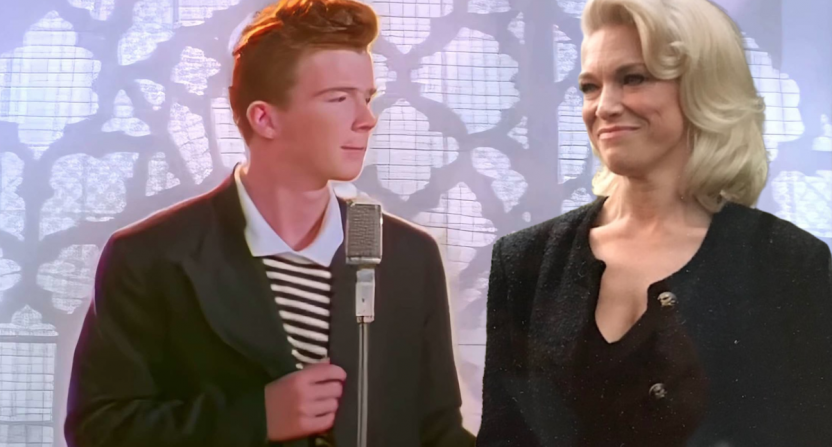 Ted Lasso makes plenty of pop culture references in each episode, whether it’s a song, movie, or book. But last week’s “No Weddings and a Funeral” — Episode 10, Season 2 — prominently featured a bit of 1980s pop music nostalgia with Rick Astley’s 1987 hit “Never Gonna Give You Up.”

[Spoiler alert if you’re waiting to watch all of Ted Lasso, Season 2 later on. Please check out our group recap here.]

During the episode, Rebecca Welton (Hannah Waddingham) spends the night at her childhood home upon learning that her father had died. And part of her mother’s morning routine is to blast “Never Gonna Give You Up” throughout the house to perk her up as she gets ready for the day.

Why play a 34-year-old pop hit? “When I love something, I love it forever,” Deborah Welton (Harriet Walter) tells her daughter.

how did ted lasso have my crying over rick astley pic.twitter.com/qrTClJZVBl

Later, during her father’s funeral, Rebecca doesn’t know what to say during a eulogy and begins reciting lyrics from Astley’s song. Friends and family catch on and help her sing along as she becomes too emotional to continue. (Depending on your view, that scene was either touching or kind of cheesy.)

Considering how fast and widely anything can spread online, it probably shouldn’t be a surprise that Rick Astley quickly discovered his role in that Ted Lasso episode. But Astley says he was a fan of the show anyway, so it must have been even more surprising to suddenly hear his song as part of the story.

“It’s taken a little while for me to process what I think about the latest episode of Ted Lasso,” said Astley in a video.

“I’m a massive fan of the show, and I was just completely blown away with what they did with that song. I have to say to Hannah Waddingham — Emmy Award-winning Hannah Waddingham — you did an amazing, incredible job. It was so emotional, so moving, so incredible. People have said they even cried [during] the church scene, I don’t want to give too much away, but.. .just amazing, thank you very much for including that song in your beautiful show… I’m blown away. Just fantastic.”

Guest appearance for Astley in Season 3 of Ted Lasso? What do we think?

Just a guess, but Astley may also have been happy that “Never Gonna Give You Up” wasn’t used as a joke, something he’s surely seen plenty of as “Rick Rolling” pranks and memes, tricking people into watching the music video, have been a part of internet culture for approximately 15 years. (Has it really been that long?)

And because all of this has probably put that song back in your head, here’s the video for you. Still holds up nearly 35 years later. No need to thank us! But you’re welcome.