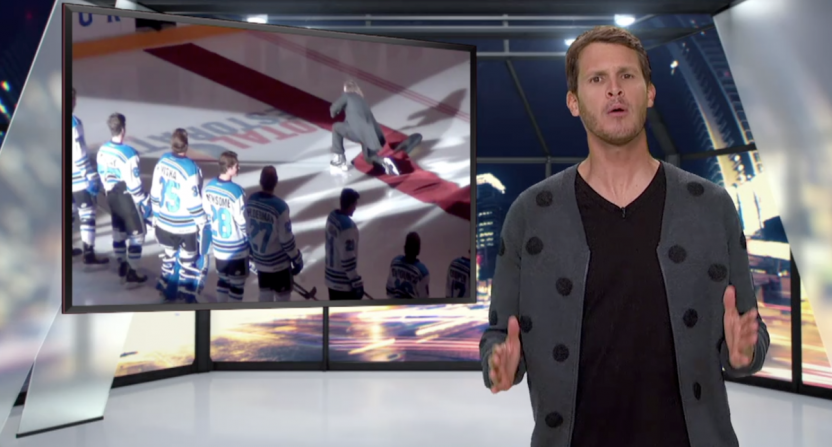 On Tuesday night, the final episode of viral video and sketch comedy series Tosh.0 will air on Comedy Central. (The network is running previous episodes of the show throughout the day, leading up to the finale’s premiere at 10 p.m. ET.)

Maybe it’s been a while since you’ve watched Daniel Tosh’s commentaries and responses to web videos and pop culture trends. (Should we predict that one of the first comments to this post or replies on Twitter will be, “That show’s still on?” Well, it is for one more night, Reply Guy.)

But at one point, Tosh.0 was must-watch TV or online video clip for many comedy fans or even those who just wanted a laugh on social media. As TheWrap’s Tim Baysinger points out, the show also helped launch the careers of comedic talents like Amy Schumer and Jordan Peele. Even if many viewers moved on and Tosh.0 became less trendy, it was on the air for 12 years. Premiering in 2009, that’s a phenomenal run for any series.

Tosh, a UCF alum and Miami Dolphins supporter, is also a huge sports fan. (He once bet against the Dolphins to raise money for a friend’s cancer treatment.) So parodies of sports stories and commentaries on sports media were often targeted as part of his attacks on pop culture.

(Should we warn you that these clips aren’t safe for work? It feels necessary. Like the spoof of ESPN’s 30 for 30 documentaries and the massage parlor scandal involving New England Patriots owner Robert Kraft? Probably one to watch at home.)

Perhaps most memorably, Tosh once went after ESPN for swiping his recurring “Web Redemption” sketches (in which someone who embarrassed him or herself in a viral video was allowed to restore their reputation) in SportsCenter‘s “The Awesome Video Segment.” In retaliation, he spoofed the network’s once-popular “Sport Science” feature.

Or how about the time Tosh skewered public access call-in shows, sports talk radio, and then-Alabama offensive coordinator Lane Kiffin (to whom the comedian slightly resembles) in a sketch?

Kiffin’s mother didn’t care for Tosh making fun of her son, his then-wife Layla, and his tenures with the Oakland Raiders, Tennessee, and USC (and objected to the show’s foul language), but the coach himself thought the bit was “pretty funny.” And the sketch’s title, “Kiffin’s Krimson Korner,” was used for signs at ESPN’s College GameDay — just as Tosh predicted.

Five years later, Tosh’s Kiffin returned for a parody of Around the Horn:

There are many other sports-themed sketches from the show’s 12-year run, involving the Olympics, baseball, game shows, pro wrestling, and so much more. (More Kiffin, too!) Just search “Tosh.0” and “sports” on YouTube, and you’ll have an afternoon’s worth of entertainment. If you’re getting together with family over Thanksgiving (even though the CDC recommends against it), watching some of these bits could be a welcome diversion.

According to The Hollywood Reporter, Tosh.0 was originally set to run for four more seasons (and 80 more episodes) on Comedy Central. But changes in executive leadership at ViacomCBS mandated an emphasis on animated programming, shows addressing current events, and made-for-TV films squeezed out scripted and sketch comedy shows.

Thanks to Daniel Tosh for so many laughs over the past 12 years. (And the continued laughs we’ll enjoy from YouTube clips for years to come.) The series finale of Tosh.0 premieres on Comedy Central Tuesday night (Nov. 24) at 10 p.m. ET.