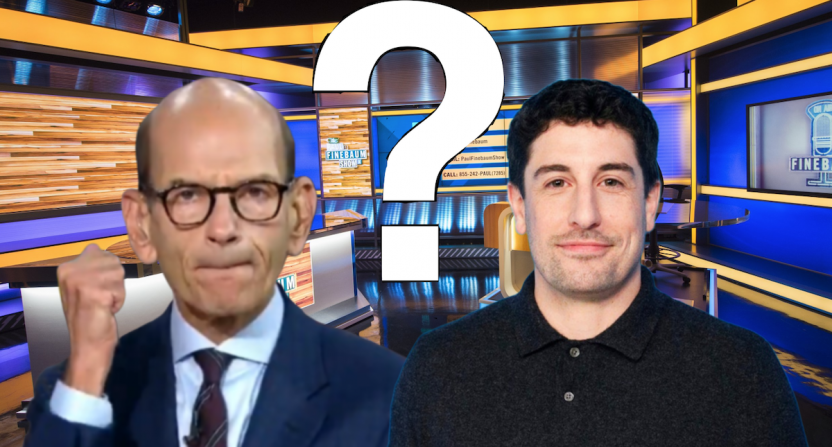 When Paul Finebaum’s contract with ESPN was nearing its end early last year, among the many possibilities that he was discussing with other networks was a sitcom based on the college football pundit’s life.

Naturally, that raised eyebrows throughout sports media and college football fandom. What would a Paul Finebaum sitcom look like? Quickly, comparisons were made to Listen Up!, the CBS series based on Tony Kornheiser’s life (and his Washington Post Style columns).

Starring Jason Alexander as “Tony Kleinman” and Malcolm-Jamal Warner as “Bernie Widmer” (based on Michael Wilbon), the sitcom lasted one season from 2004 through 2005. Critics weren’t kind to Listen Up!, but it drew decent ratings which might be why 22 episodes were produced before the show was canceled due to “rising production costs.”

So it’s understandable that Kornheiser would be curious about someone else in sports media going through the sitcom development process. Finebaum was a guest on Kornheiser’s podcast Monday to talk about the major changes happening in college football with Texas and Oklahoma leaving the Big 12 for the SEC. But at the end of the segment, Kornheiser asked Finebaum to share some of his sitcom experience.

Related: Paul Finebaum: “The Big 12 is the Titanic, and you can see the iceberg in sight”

Finebaum explained that a Hollywood producer heard him on Kornheiser’s show three years ago, thought there was potential sitcom material, and got the development process rolling. And as he told the Charlotte Observer‘s Scott Fowler a year ago, writers were working on scripts and producers were ready to pitch the show to networks. He also said “a well-known actor” was interested, but couldn’t say who at the time.

Paul Finebaum reveals that Jason Biggs was going to play him in a sitcom based on his life: pic.twitter.com/5w8vszl6WG

One year later, Finebaum apparently felt safe to reveal that Jason Biggs, best known for his role in the American Pie comedies, would’ve (and maybe still could) play him on the sitcom.

“A producer in Hollywood heard the podcast, he called another guy and two years later, this thing goes into motion,” said Finebaum. “And it’s developed as a sitcom. It is sold to ABC.

“The guy who was going to play me was a younger person, it was Jason Biggs, the star of the American Pie series. And then COVID happened and everything’s up in the air. Everyone knows what happened. Hollywood’s in a state of upheaval.”

Since Biggs is younger than Finebaum, the series would’ve been set at an earlier point in his career. Whether that was when he was a reporter covering college football in Alabama or once he began his radio career wasn’t disclosed. Would this have been more of a workplace comedy, perhaps resembling Frasier?

Based on what Finebaum said, it doesn’t sound as if the project is completely dead. The show just never went into production because of COVID considerations and until filming can be done safely, that probably won’t change.

Related: A network sitcom is being developed based on the life of… TJ Simers?!

But if scripts were written and Biggs was still attached, a pilot could still be produced and shopped to networks. Finebaum mentioned ABC, but ABC Studios has produced shows for CBS (The Amazing Race) and Apple TV+ (Amazing Stories). Being in-house as an ESPN employee, of course, ABC seems like a natural fit.

Yet Finebaum agreed to a multi-year extension with ESPN last month and a sitcom might not be part of the package that was being pitched to other outlets, which included a Ringer-like platform. But Finebaum could have conceivably been busier creating a podcast network, not just doing his radio show, so there’s presumably still room for whatever involvement, if any, he could have in a sitcom.

Related: Jalen Rose not over Kobe Bryant scoring 81 points on him in clip from ‘Jalen vs. Everybody’ pilot