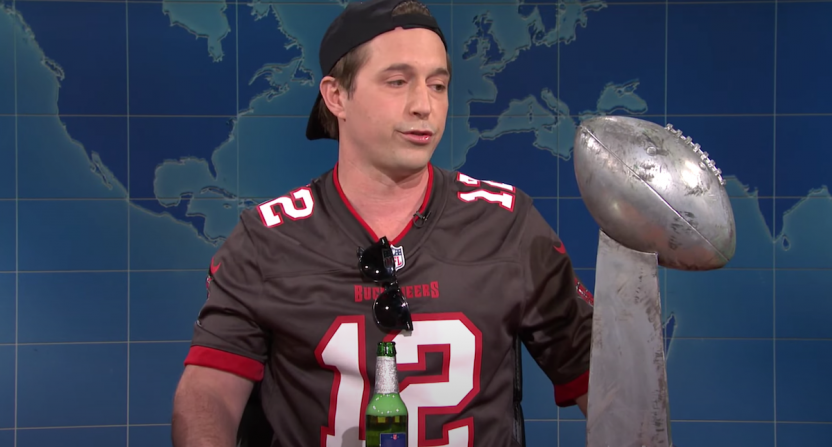 Tom Brady celebrating a bit too hard during the Tampa Bay Buccaneers’ Super Bowl championship celebration was one of last week’s biggest sports stories. Apparently having too much to drink was a rare glimpse of Brady not completely in control off the field, serving his TB12 brand of healthy, pliable lifestyle.

So it probably shouldn’t be a surprise that Saturday Night Live capitalized on the quarterback’s unusual display of public frivolity by getting Beck Bennett to play “Drunk Tom Brady” on a “Weekend Update” segment. (Hey, it was either that or a sketch about Mark Cuban stopping the national anthem from being played before Dallas Mavericks games, right?)

Not only was Brady still in celebration mode, but he brought a dinged-up Lombardi Trophy with him and used it to open a bottle of beer.

“People were surprised I was tossing this bad boy around,” said Drunk Brady. “But the trophy has got a football on it.”

Check out the sketch:

Unfortunately, Bennett’s attempt at impersonating Brady wasn’t very good. He can play a drunk guy pretty well. (Not as well as Bobby Moynihan’s “Drunk Uncle,” of course.) But if not for the Buccaneers’ No. 12 jersey and Lombardi Trophy, you might not have guessed Bennett was playing Tom Brady.

Maybe the best part of the sketch was when Brady acknowledged that fans don’t seem to like him. Whether they resent his success and are tired of seeing him virtually every February under a rain of confetti celebrating another Super Bowl win, think his diet and training regimens are a bit too strict, or believe he supported the previous president, Brady isn’t the most popular guy despite the attention he draws.

“My problem is… nobody likes me,” he said. “I don’t know what I did so wrong. All I did was go out and win Super Bowls. I keep thinking, ‘Maybe one more trophy and people are gonna like me.’ Nope. They don’t talk about the wins. They just talk about how I kiss my sons.”

SNL also touched on fans disliking Brady two weeks ago when John Krasinski hosted the show and played Brady in the cold open sketch. He captured Brady pretty well — which probably shouldn’t be a surprise since he’s, like, a good actor — mostly because he didn’t show much personality. But he probably knew how to play him from watching him so often as a fan.

If SNL brings back Brady for another sketch, maybe the show can get another cast member like Alex Moffat or Mikey Day to play him instead. (Looks-wise, maybe Colin Jost would probably be best, but he has to anchor “Update” with Michael Che.)