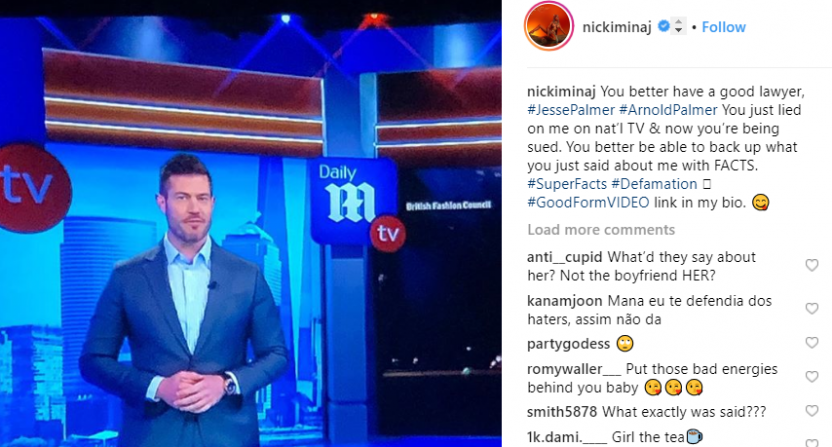 It’s an extremely 2018 media Mad Libs story to write “Nicki Minaj threatens to sue Jesse Palmer over Daily Mail TV segment,” but here we are. On Tuesday, rapper Minaj went after Palmer in tweets and an Instagram post. It’s not clear exactly what Palmer said or did, but it doesn’t appear to be about his work for ESPN or ABC. Rather, it seems like it’s in an episode of DailyMail TV (a daily syndicated gossip show produced in conjunction with CBS; Palmer has been hosting it since its September 2017 debut) that aired Tuesday. That portion doesn’t appear to be on their website (which has only Part 1 and Part 3 of Tuesday’s show). Here’s Minaj’s Instagram post on this:

You better have a good lawyer, #JessePalmer #ArnoldPalmer You just lied on me on nat’l TV & now you’re being sued. You better be able to back up what you just said about me with FACTS. #SuperFacts #Defamation 🥳 #GoodFormVIDEO link in my bio. 😋

For the record, Jesse Palmer is Canadian, and not related to American golfer Arnold Palmer. And it’s unclear what #SuperFacts are. But sure. It isn’t exactly clear what Palmer said that prompted this, but “MTONews.com” has it as “During todays broadcast Jesse claimed that Nicki Minaj bailed her brother Jelani Maraj out of jail, and continues to support him. Her brother was convicted of sexual assault on a child.” If that’s what Palmer said, it’s possible there could be a defamation case if Minaj wasn’t involved with her brother’s bail (for what it’s worth, Jezebel wrote in 2015 that there were initial reports Minaj was involved in bailing him out, but it was actually their mother who put up his bail), but a lot would depend on what Palmer specifically said. We’ll see if she does actually file a lawsuit over this. Here’s what she added to this on Twitter in posts tagging Palmer:

As per Rolling Stone, “The Barbz” is “the nickname given to Nicki Minaj’s army of online fans,.” and boy, are they active. Any Twitter search for “Jesse Palmer” brings up a whole lot of Minaj fans yelling at him, with many not even sure why they’re yelling. Oh, and one who thinks Palmer is behind freezing her YouTube views?

Minaj then further boosted this with this inflammatory tweet:

You going to jail 😂😂😂😂😂@JessePalmerTV

No, most defamation cases do not lead to someone going to jail, as most U.S. defamation proceedings are civil rather than criminal (so resulting in financial awards, not jail time); there are some states with criminal defamation statutes, but that seems unlikely to apply here. Still, it’s not out of the question that Minaj might have a civil case, but it again depends on what Palmer said.

This is also the second drama to pop up this week around Minaj, as she took criticism for revealing she’s dating Kenneth “Zoo” Petty. Petty is a registered sex offender in New York who also spent seven years in prison for manslaughter. The Daily Mail covered that on their website, and that may be what led to Palmer bringing her up on TV. We’ll see if anything comes of this threatened legal action. For the record, Palmer has not responded as of Tuesday evening; his most recent tweet is from Monday, promoting his hosting of Food Network’s Holiday Baking Championship.

We’ll see if Minaj winds up actually suing Palmer, but this has certainly been one of the stranger sports-adjacent media stories in a while.