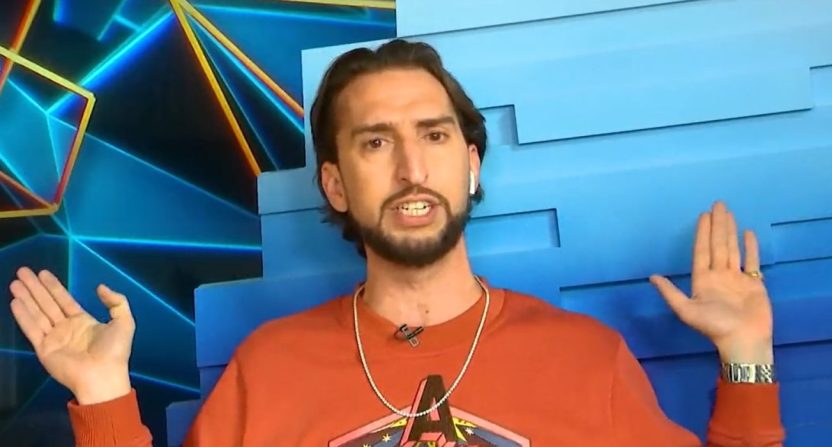 Fox Sports host Nick Wright has a way of twisting things to fit his narrative in a manner that no one else could have possibly imagined.

One week after watching the Kansas City Chiefs dump Tyreek Hill only to claim his favorite NFL team improved, Wright took LeBron James winning a worst actor award and used it to say he’s the greatest of all time.

“It absolutely unequivocally does give another example as to why LeBron is judged so much differently than every other great athlete ever,” the Fox Sports host said on his podcast What’s Wright? with Nick Wright.

LeBron winning a Razzie for 'Space Jam: A New Legacy' actually cements his GOAT status, according to @getnickwright:

"This is another example of why LeBron is judged so much differently than every other great athlete, ever. This is a microcosm for how we do LeBron on the court." pic.twitter.com/27rtnm2pvo

As the incident between Will Smith and Chris Rock at the Oscars dominated the national conversation over the weekend, LeBron was being mocked with the Golden Raspberry award for “Worst Actor,” earned thanks to his highly scrutinized performance in Space Jam: A New Legacy.

The Golden Raspberry Awards or “Razzies” is a parody show that launched in 1981 to counter the Oscars and honor the biggest film failures of the year.

“Let’s go to Shaquille O’Neal,” Wright said. “Who was in some historically bad movies including [Kazaam]. The idea that we all still to this day pretend that Michael Jordan was a good actor in Space Jam – LeBron, his movie grosses $160 million and everyone’s like ‘I gotta tell ya, his blocking in the second act – not up to par.’”

Realistically, LeBron never set out for an Oscar when he signed on to make a Space Jam sequel. And the fact that it was a financial success during a global pandemic should probably be valued more than the 4.4 rating out of 10 the film has on IMDB.

LeBron’s Space Jam was mocked by many older analysts and sports fans who felt the movie failed to live up to the legacy and nostalgia of Jordan’s Looney Tunes film from 1996. But LeBron is an NBA player who made a kids movie; this never warranted such detailed judgement from film critics and LeBron critics like Skip Bayless alike.

“This does contribute to the GOAT argument,” Wright said. “Because it is a part and parcel example that LeBron James is held to a standard the likes of which no athlete EVER has been held to.”