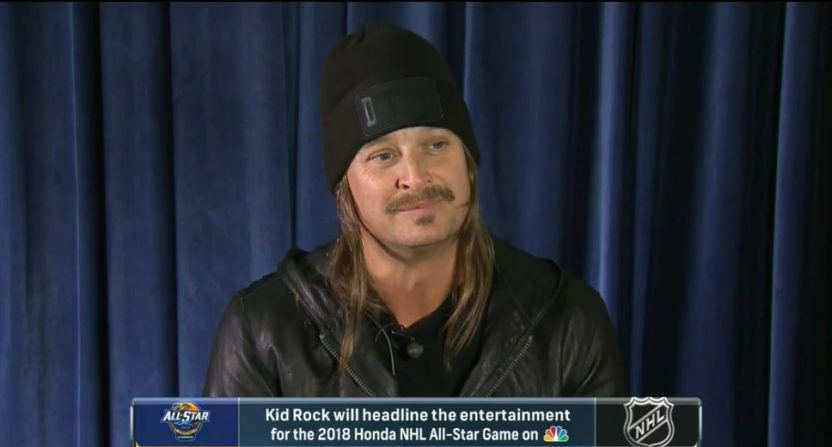 The NHL created a whole lot of backlash Tuesday with its announcement of Kid Rock as the featured 2nd intermission performer at the upcoming All-Star Game on Feb. 18.

Kid Rock, or Robert James Ritchie, has earned five Grammy nominations and sold over 25 million albums in the U.S., and he does have a new album to promote (Sweet Southern Sugar, released in November). But Ritchie has also garnered a lot of political attention with his endorsement of Donald Trump, his right-wing speeches at concerts, and even his brief flirtation with running for a U.S. Senate seat.

Beyond that, his highest-profile musical successes are a while back; 2010’s Born Free was his last album to go platinum, and his two latest albums haven’t even gone gold yet. So there’s been substantial criticism of this move both from political and relevance angles.

Here’s some of it:

artists the nhl could have booked for all star weekend instead of kid rock:
– literally any elvis impersonator
– the jonas brothers
– the ghost of frank sinatra
– a roomba with an ipod attached to it

Minorities, people of color and women already feel like the NHL doesn't gaf about them. Having Kid Rock as the All-Star game entertainment just underlies that point.

Kid Rock will be headlining the entertainment for the NHL All Star game along with Tomi Lahren rapping, the woman who wore the MAGA dress singing, and Scott Baio pucking himself.

Kid Rock, noted racist, performs at event in which one of the teams is captained by the NHL's only ever minority superstar, who gets pelted with racist tweets every time he wins a playoff series.

Gee, why can't the NHL expand its viewership?

The NHL looked at how much attention that college football got for having trendy, young, peak-popularity artist in Kendrick Lamar play the halftime show. So they decided to get…

And they say we’re supposed to keep politics out of hockey smh https://t.co/dIF3Izd9lZ

I've never seen @NHL fans more united than they are right now in hating the announcement that Kid Rock is playing the #NHLAllStar game.

Meanwhile at the NHL offices

*zoom out from a whiteboard with Vanilla Ice, Nickleback, and Creed scratched off*

NBCSN had Ritchie on Tuesday night for the official announcement, and that was an interesting interview. First, here’s their announcement, with Jeremy Roenick saying “Can’t get a better guy” and Ritchie playing up his Detroit roots:

Roenick then talked about his friendship with Ritchie, saying “When I talk to people about you, I say, ‘Kid Rock is the most talented musician, I think ever, on the planet, because you can put any instrument in your hand or on your mouth and you can play anything and rock a house and sing any kind of genre.” Ritchie replied with a self-deprecating “Jack of all trades, master of none.”

He then followed that up by talking about working hard the way athletes do:

Ritchie later talked about how he hasn’t done TV for a while, because “It’s a turnoff with all the politics that go into it, what you can and can’t do.” He said the NHL was open to “trying to make this special”:

He went on to talk about how he hopes this leads to other entertainers being given more free reign:

So, this will certainly be an interesting move. The NHL’s taken a lot of Twitter heat over it, but they obviously feel Ritchie’s a valuable get for them. We’ll see how his performance goes and what kind of reaction it generates.