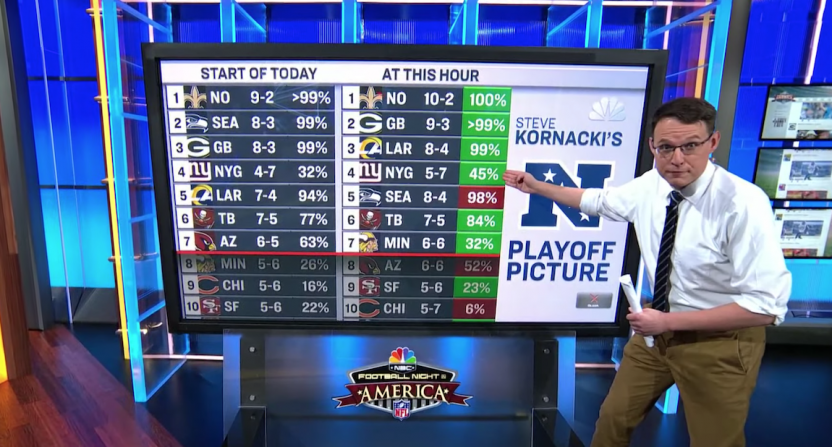 MSNBC’s Steve Kornacki became a pop culture superstar on Election Night and the four days thereafter when the 2020 presidential election was being decided.

Standing in front of his Big Board, basically a giant iPad, Kornacki broke down voting totals in counties from crucial swing states like Pennsylvania, Georgia, Nevada, and Arizona for hours and days. The man seemingly didn’t sleep for five days, doing calculations at a small desk as ballot totals came in to affect percentages and probabilities of Donald Trump or Joe Biden winning the election.

Seeking to capitalize on Kornacki’s popularity, in addition to applying his skills to calculating NFL playoff percentages, NBC invited the political correspondent onto its Football Night in America pregame show Sunday night.

Instead of Brian Williams throwing it across the studio for the latest voting data from Maricopa County, Arizona, Mike Tirico went to Kornacki on how the NFC playoff picture was affected by the Giants’ 17-12 win over the Seahawks and the Cardinals’ 38-28 loss to the Rams. Kornacki cited Pro Football Focus saying that the Vikings’ probability of making the playoffs was still low, despite being ahead of Arizona in the standings.

To the big board for the NFC Playoff Picture courtesy of @NBCNews' @SteveKornacki! pic.twitter.com/IWmNwYTviF

Kornacki’s appearance compelled a reply on Awful Announcing’s Twitter feed that has to be shared.

Why does this look like the guy from election night breaking down florida county by country as the literally every county came in? Rolled up paper, hunched back, intensely explaining everything on the screen

NBC had Kornacki on again during halftime of Sunday night’s Broncos-Chiefs game. In addition to assessing the NFC playoff race, he looked at the AFC and the Raiders putting themselves in the race after a last-second win over the Jets. That sets up a big Week 14 game between Las Vegas and the Colts with that final playoff spot possibly at stake.

Sure, having Kornacki join the studio show was a gimmick. Maybe viewers who normally would’ve skipped pregame or halftime coverage tuned in. But Kornacki, his screen, signature khakis, and excitable, caffeinated delivery made the transition from cable news program to football pregame show quite well.

After all, the game in Kornacki’s normal political beat and the NFL playoff picture is about percentages, right? What trends are created by the latest data? Did mail-in ballots and party leanings increase the Democratic candidate’s chance of beating the Republican? How did the Browns beating the Titans affect their chances of making the postseason?

According to The Athletic’s Richard Deitsch, Kornacki’s appearance probably won’t be a one-off either.

NBC Sports tells the @TheAthletic that "there is a high probability" you will see @SteveKornacki on a future edition of Football Night In America after tonight.

NBC isn’t going to have Kornacki on every week during the NFL season, especially when elections are being covered. He’s got a day job, also contributing reporting and feature work to NBC and MSNBC’s political coverage. (Chuck Todd has a day job too and also works his Big Board on Election Night. But he might be intrigued. The Meet the Press host already appears each week on The Tony Kornheiser Podcast to pick NFL games.)

But why not have someone on after, say, Week 12, each week to look at playoff probabilities, information which plenty of fans are already seeking online? With the right analyst and enticing graphics on that big screen, NBC’s pregame show could stand out from the competition.

Ok this is next level! I think I love him lol pic.twitter.com/Wx9umN96OE

And in a year when political coverage became pop culture, when politics seemed more like sports than ever, Kornacki’s appearance on Sunday Night Football joins CNN’s Wolf Blitzer and John King spoofing their own election analysis to announce the Washington Wizards’ 2020-21 NBA schedule.

Stick to politics? Stick to sports? Not this year.