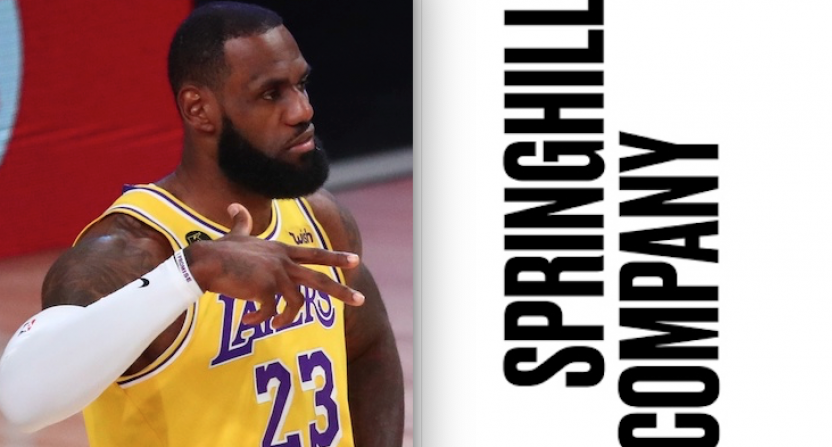 LeBron James is currently occupied with winning the fourth NBA championship of his career and leading the Los Angeles Lakers to the franchise’s 17th title. But he also continues to achieve success in his other profession as a Hollywood producer.

The SpringHill Company, the production company James runs with Maverick Carter, has signed a four-year deal with Universal Pictures that gives the studio first-look rights at any project developed. SpringHill isn’t wasting any time with production either, with three movies already in the works.

Up first is expected to be a film based on Shooting Stars, the book about James’ early life in sports and upbringing written with Buzz Bissinger. That project has been in development for nearly two years with Chris Robinson (Star) directing a screenplay by Juel Taylor (Creed II) and Tony Rettenmaier.

Another project is an adaptation of New Kid, a graphic novel by Jerry Craft which won the prestigious Newbery Award for children’s literature. The story follows a seventh-grader who loves to draw cartoons about his life and is one of the few students of color at his New York City private school.

The third film SpringHill is producing is titled Catch the Wave, developing an original pitch by Ali Kinney (Single Parents). According to Variety‘s Matt Donnelly, the movie is two Black surfers who build a romance amid the setting of “Bruce’s Beach,” a 1920s Black community in California’s Manhattan Beach that was persecuted by the Ku Klux Klan and seized by the city under eminent domain.

Previously, The SpringHill Company had a deal with Warner Brothers, under which the upcoming Space Jam: A New Legacy was produced.

The SpringHill Company includes Uninterrupted, devoted to athletes telling their stories in media; SpringHill Entertainment, focused on scripted and unscripted film and TV projects; and The Robot Company, which consults on brands and culture.