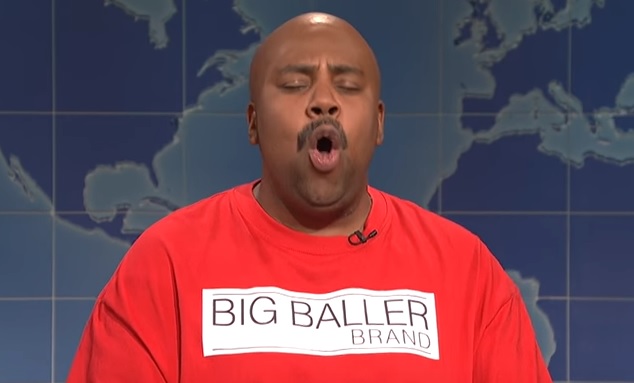 With the NBA season and Lonzo Ball’s rookie campaign with the Los Angeles Lakers underway, LaVar Ball made his triumphant return to Saturday Night Live this weekend. Or, well, Kenan Thompson’s version of the brash, outspoken sports dad returned to the Weekend Update desk (after his August debut) to banter with anchor Michael Che.

As you might expect, SNL’s LaVar was feeling pretty good about how things were going with his son now starring for the Lakers and ready to ascend to the greatest NBA player of all time. But rather than me paraphrasing Ball, let’s get a direct quote.

“I told you it would happen,” he said. “The Lakers are the best team ever! Never lost. [Editor’s note: The Lakers are 5-8 going into Sunday’s play, placing them third in the Pacific Division and 12th in the Western Conference.]”

When Che pointed out that Lonzo was playing fine, averaging eight points a game (now 9.7, after Saturday’s performance), but not at the Kobe Bryant level, SNL’s LaVar predictably scoffed. Maybe he was on to something, as Lonzo was in the process of becoming the youngest NBA player to notch a triple-double Saturday night.

Watch the full clip for yourself:

“My offspring is gonna rule the world! Just look at me,” said SNL’s LaVar. “I am a giant. Full head of hair! Twelve fingers! I can pull a tractor trailer 20 miles over a mountain using only MY JUNK! And I’m the only man on Earth who’s ever eaten just one Lay’s potato chip.”

He went on to boast about all the contests and honors Lonzo would win during his rookie season, including being named America’s Next Top Model. Che tried to bring up LaVar’s other son, LiAngelo, being arrested for shoplifting in Hangzhou, China, but LaVar questioned the validity of those charges.

“Come on,” he said. “Why my boy need to do shoplifting for when he’s just about to put out his own million-dollar sneaker?” SNL’s LaVar then unveiled LiAngelo’s brand-new sneaker, the Legend O20s. Each shoe costs $700,000. Not the pair. Each shoe, which comes with a flashing basketball on the outside and both a Bose 24-speaker sound system and chicken rotisserie (be sure to watch the video for LaVar’s pronunciation of “rotisserie”) on the inside. You can’t buy a pair!

Having chicken ready as soon as you’re done playing on the court should definitely help with recovery. Protein, people! Gatorade and Nike may want to get in on whatever SNL’s LaVar is cooking there. Or if enough players wear the Legend O20s, maybe they can sell chicken during halftime of NBA games. How much of a cut goes to the arenas will have to be negotiated, but LaVar has probably already worked that out. Maybe we’ll get the details on the next season of Ball in the Family on Facebook Live.