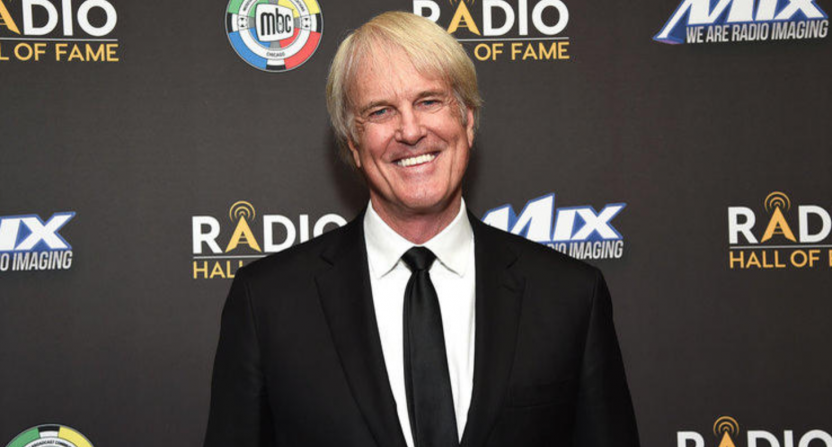 Most sports fans likely know John Tesh for composing the iconic “Roundball Rock” theme for NBC’s NBA coverage in the 1990s. More people probably know him from his days co-hosting Entertainment Tonight from 1986 to 1996.

But Tesh has a long background in broadcasting, having anchored news in Nashville, Raleigh, Orlando, and New York before sitting alongside Mary Hart in the ET studio. In addition to doing news, Tesh also worked in sports broadcasting, calling smaller niche events before going on to broadcast the Tour de France, U.S. Open, and gymnastics coverage at the Olympics.

Related: John Tesh offered ABC/ESPN the rights to use NBC theme “Roundball Rock” for NBA games and was turned down

The musician and broadcaster recently talked to Jon Zaghloul on Sports Talk Chicago/WCKG about his career, “Roundball Rock,” and getting assigned to call events about which he knew very little. For instance, Tesh was asked to cover a horse jumping competition for CBS and was paired with an analyst who didn’t say much during a live broadcast.

“She grew up always wanting to be a horse jumper and here she is with her first routine,” recalled Tesh, who didn’t want to embarrass the analyst by naming him. “What should we expect here? And he goes ‘Yeah, she’s great.’ Then I hear in my ear, my producer said, ‘Oh boy, we’ve got a problem.'”

Of course, Tesh and Zaghloul discussed “Roundball Rock,” which might be the entertainer’s most enduring sports and pop culture legacy. Fox Sports brought the theme music back for its college basketball coverage, which provided a pleasant memory for many fans while also possibly confusing them. (“Wait, this isn’t the NBA. It’s not the 1990s… !“)

Tesh composed instrumental music for several sports broadcasts before writing “Roundball Rock.” but it was for niche events like the Tour de France. Getting the theme song for a major sport on a network would be a big boost to his music career.

John Tesh explains composing music for sports broadcasts, which eventually led to his legendary “Roundball Rock” theme for the NBA ON NBC: pic.twitter.com/sLqveil479

As Tesh alluded to, the story of how he came up with the music and called his answering machine from France to make sure it was recorded before he went to sleep and forgot about it is a part of his stage show.

There is so much more worth listening to from Zaghloul’s interview with Tesh. He’s a fantastic conversationalist with a very self-deprecating sense of humor. (You can’t make more fun of him than he does of himself.) Tesh has many stories to tell, including his struggle with cancer and how he and his band have dealt with performing when no music venues are hosting concerts during the COVID-19 pandemic.