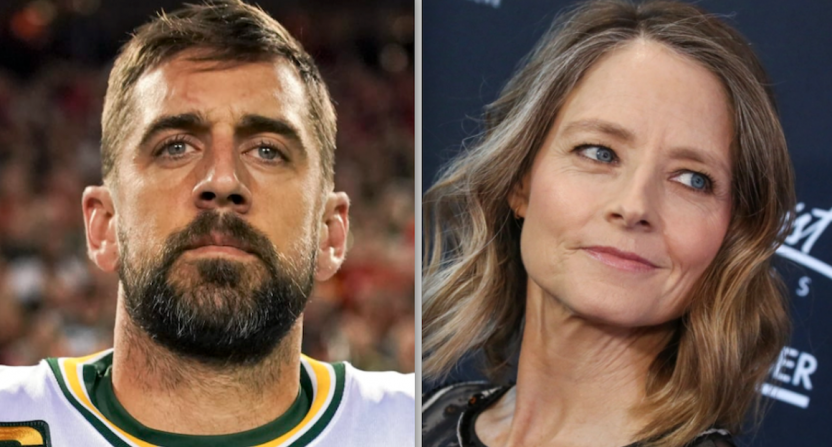 When Aaron Rodgers gave his acceptance speech for winning the 2020 NFL Most Valuable Player award a couple weeks ago, many people zeroed in on the Green Bay Packers quarterback dropping the news that he was engaged. (Reports soon confirmed that Rodgers was engaged to actor Shailene Woodley.)

However, another curious mention in Rodgers’ speech was Jodie Foster. The famed actor-director’s name was seemingly just dropped in there casually, though she was included among a group of people Rodgers thanked for supporting him.

Have any Jodie Foster movies been part of Rodgers’ regular regimen or cool-down period? Did watching her pursue criminals in Silence of the Lambs or The Brave One inspire him to attack defenses in practice? Perhaps he channeled her quest to find alien life in Contact while studying film. Did he imagine being in Taxi Driver as Travis Bickle and saving her from a life of depravity?

Foster’s name is among the names listed at the 3:23 mark of this video:

The mystery of Rodgers’ shout-out to Foster was addressed when she appeared on ABC’s Jimmy Kimmel Live Thursday night to promote her upcoming movie, The Mauritanian.

(No, that’s not the Disney Plus series about a galactic bounty hunter charged with taking care of an alien toddler. This film is based on the true story of a prisoner held in Guantanamo Bay for 14 years and his legal defense. It’s in theaters now but will be available on-demand March 2. You can watch the trailer here.)

As a veteran interviewer, Kimmel soon got right to what the people wanted to know. Why did Aaron Rodgers mention Foster in his acceptance speech? What’s the connection there? That part of the conversation begins at the 2:22 mark:

“You see he said, ‘my team,’ even though he said ‘off the field,'” said a beaming Foster. “That makes me a Green Bay Packer. People keep saying to me, ‘No, Jodie, that does not mean you’re part of the team.’ But it does mean I’m part of the team.”

Foster admitted that she doesn’t know Rodgers, but he somehow found out that she was “his biggest fan.” OK, that’s not much of an explanation.

But Foster’s co-star in The Mauritanian is Shailene Woodley, who plays an associate of Foster’s defense attorney. Apparently, being fans of the Green Bay Packers and mutual admiration for the team’s quarterback came up during their conversations. Or maybe she somehow introduced the two during filming?

As The Big Lead’s Stephen Douglas pointed out, Foster has gone public with her Packers fandom on previous talk show appearances. For instance, she donned Cheesehead headwear during a 2016 appearance on Conan O’Brien’s show.

Asked why she became a fan of the Packers, Foster said there was no Los Angeles team to root for as she developed a love for football (remember, the Rams didn’t move back to L.A. until 2016) and enjoyed what she called the team’s “outfits,” that famed green-and-gold color scheme.

Kimmel joked that Foster will have to return the favor and mention Rodgers in her acceptance speech if she wins a Golden Globe Award this year. (Foster among the five nominees for Best Supporting Actress.) She said she’d also get Davante Adams in there somehow.

That might be a reason (other than Tina Fey and Amy Poehler hosting) to tune in for the Golden Globes on Sunday, February 28.