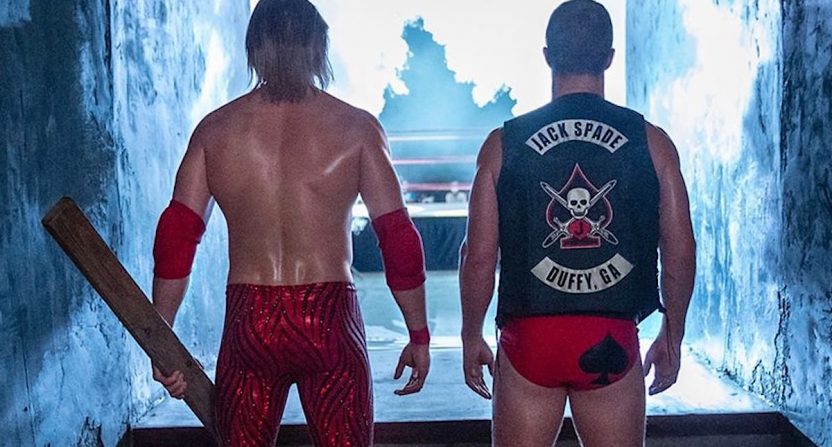 Duffy, Georgia is a long way from the bright lights and big cities of big-time professional wrestling. But the fictional small Southern town provides the ideal setting for Starz’s new series, Heels.

The story revolves around Jack Spade (Stephen Amell, Arrow), who’s trying to keep the regional wrestling promotion that his father created alive and push it to grow. In addition to being the main business and creative force behind the Duffy Wrestling League, Jack also portrays the main villain and current champion in the ring.

His brother, Ace (Alexander Ludwig, Vikings) is the popular star of the DWL and attracting interest from bigger corporate wrestling organizations. Ace wants to move on from Duffy, even if the DWL would suffer from losing him. But Jack controls the storylines and can influence whether Ace breaks through with fans and talent scouts.

Show creator Michael Waldron moves from the grand time-travel adventure of Marvel’s Loki to the grounded drama of people working in the fake world of pro wrestling, but dealing with real problems in their lives. (Heels has been in development since 2016.) Yet despite the very different settings and premises, maybe there are some similarities in lead characters who deeply care about how they’re perceived and what sort of legacy they’ll establish.

Loki wants to be viewed as a god, an all-powerful master of the universe whose name causes legendary fear. Jack Spade needs the DWL to succeed so the rest of his days aren’t spent living a mundane life. Both are battling against forces who threaten to pummel them out of existence. (In Jack’s case, that’s the rival Florida Wrestling Dystopia.) And virtually everyone on both shows has larger aspirations.

Ace wants to be a big star loved by the people. Jack wants the DWL to succeed on its own, determined to take it where his father never could. His wife, Staci (Alison Luff), doesn’t want to be defined by her husband. Ace’s valet, Crystal (Kelli Bergland), wants to be more than a pretty face. She wants to wrestle, even though the DWL doesn’t have any other female performers. Rooster (Allen Maldonado) resents being overlooked for top matches, major storylines, and championship shots.

But not everyone wants to get out of Duffy or make a power grab. Former NFL linebacker James Harrison plays Apocalypse, who’s grateful to still have an opportunity in wrestling after major struggles with alcoholism. (It’s not a big role, but Harrison shows he has acting talent.) Bobby Pin (Trey Tucker) is a wrestling newbie thrilled for a chance in the ring, but might just be too nice a guy for success in a cutthroat business.

Every character in Heels has a story, even the minor ones. While that makes the show compelling, it also creates many soap-opera elements that might turn off viewers looking for more behind-the-scenes wrestling stuff.

Many dramatic elements, such as a family and community dealing with someone’s death, the reality and necessity of day jobs clashing with dreams, and financial struggles sometimes make the show feel like it takes itself too seriously. Fans hoping for something more over-the-top and satiric like Netflix’s GLOW could be disappointed with the melodramatic tone in so many of the episodes.

But the show does have some intriguing insights into the pro-wrestling lifestyle, including explanations on how to avoid getting hurt in the ring, the locker room culture, filming promos to drive interest, and how story and narrative drive everything. The concept of “kayfabe” (maintaining the illusion that wrestling’s fake storylines are real) in a small town where wrestlers have day jobs and frequently encounter fans at the grocery store, gas station, or church is fascinating.

Chris Bauer (The Wire) is especially fun as “Wild” Bill Hancock, a former wrestling villain (and DWL alum) who’s now a talent scout for the big-league, national wrestling association, but a poor fit in corporate culture. (A viral video that gets him in trouble might be the show’s most memorable moment.) And longtime wrestling fans will likely enjoy CM Punk in the third episode as “Ricky Rabies,” a veteran wrestler keeping his career alive by touring independent promotions like the DWL.

Four of Heels‘ eight episodes were available to screen in advance and they set up several storylines that are compelling enough to stick with the rest of the season. Can a more family-friendly wrestling product succeed against a darker, more graphic and ambitious style of entertainment? Does wrestling make it impossible to live a normal life outside of the ring? Those interested in such stories set in the world of wrestling should enjoy this series.

Heels premieres on Starz Aug. 15 at 9 p.m. ET. The series is also available on-demand, Starz.com, and the Starz app.