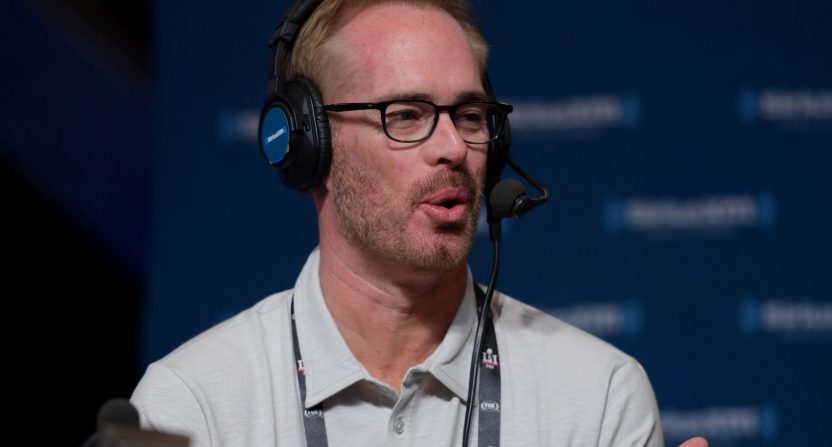 Since the passing of Alex Trebek in November, Jeopardy! has returned with a slew of guest hosts from all corners of pop culture, media, and sports, including Katie Couric, Dr. Mehmet Oz, Ken Jennings, and Green Bay Packers quarterback Aaron Rodgers. Rodgers just finished his stint as guest host, which included plenty of enjoyable moments and kept the door open for more sports-related fun.

Jeopardy! will keep the sports references coming with the news that Fox broadcaster Joe Buck will be an upcoming guest host on the program. According to the NY Post’s Andrew Marchand, not only is Buck going to guest-host but he could be in contention for the permanent job as well.

Marchand reports that Pro Football Hall of Famer’s run as host will take place in mid-summer, though it’s unclear if he’ll get one week or two weeks at the helm. Whenever it does happen, the stint will not conflict with Buck’s schedule announcing MLB and NFL games for Fox.

While Buck has plenty of critics, he’s long since proven his aptitude for hosting TV programs, being able to banter with guests and interview subjects, making quips, and roll with the punches (he’s certainly gotten practice with that). As they did with Rodgers, the show can hopefully throw in a few references to Buck’s most famous calls and moments. As he’s been has been Fox’s top announcer for baseball and football and has called multiple Super Bowls and World Series, there are plenty of stats and trivia to be mined.

Of course, we’re all really hoping that one of the answers is, “This NFL receiver once performed ‘a disgusting act’ after scoring a touchdown.”

Buck: "That is a disgusting act by Randy Moss!" … as Aikman completely blows him off. ? pic.twitter.com/FaHnaMuQv2