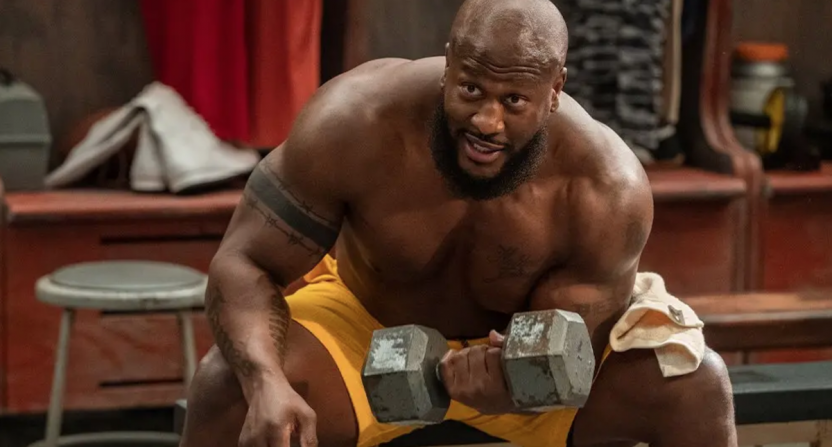 Former Pittsburgh Steelers linebacker James Harrison has been making a push into acting since retiring from the NFL in 2018. And he has the biggest role of his budding career on Starz’s new pro wrestling drama Heels, playing veteran grappler Apocalypse.

Harrison appeared on an episode of CBS’s S.W.A.T. in 2019, but first gave acting a try in 2017 with a role in the independent film Remember Amnesia. Harrison kept that quiet at the time because he was still an active player and the Steelers had a playoff game at Kansas City two days later. (Pittsburgh defeated the Chiefs, 18-16.)

“The big hush was, we couldn’t tell anybody or it’d be ‘James Harrison is shooting a movie on Friday when he’s gotta play on Sunday,'” Harrison told Awful Announcing.

But after his agency brought the role of Apocalypse to him, Harrison flew out to Los Angeles to read for showrunner Mike O’Malley (Yes, Dear) and director Pete Segal (The Longest Yard). He promptly got the part on Heels.

Harrison will likely be a pleasant surprise for viewers. He has an easy charm on camera and feels natural in his role as a mentor to the other wrestlers and younger people involved with the DWL (Duffy Wrestling League). He spoke to Awful Announcing about preparing for the role, what he learned about pro wrestling, and the work that goes into turning what’s in the script into an on-camera performance.

[Editor’s note: This interview has been edited for clarity and length.]

I see you’ve been asked a lot about your training and workouts, your regimen for this. (Any time I want to feel bad about myself, I watch your videos on Instagram.) But how much work did you have to do with wrestling trainers and stunt coordinators to prepare for this?

James Harrison: We had actual professional wrestlers that were in independent circuits. That’s who trained us on how to wrestle, how you lock up, how you pick someone up, how you help them pick you up, and how you take bumps.

The choreography and coordination of how you grip and grab and throw; you even step with a certain foot when you’re doing certain things. Left foot for this, pull the left foot out for that.

Was there anything that surprised you while you were learning to wrestle? Maybe the first time you hit the mat?

Harrison: What really surprised me was how much your opponent helps you. Like when you’re picking someone up to slam, they’re posting their hand to help get them up. When you do a suplex and you hold a guy up in the air, he’s holding his body stiff and posting off of your waist to help him stay up there. Like before you get picked up, you do a little toe leap so it helps get you up in the air faster.

Mentally, was that a big adjustment? In football, you’re trying to impose your will on opponents.

Harrison: It’s easy. I don’t have to impose my will anymore. You’re helping me, I’m helping you. We know what’s going to happen. We’re just trying to make this look as painful as possible, doing it as safely as possible.

It’s still gonna hurt, hitting the mat because it’s a hard surface. Everyone thinks it’s cushiony and bouncy — no, it’s not. And then you have to fall right on the ground. You can’t fall back and let your head hit the ground because you’ll get a concussion. You gotta learn how to fall, tuck your head, and put it to your chest. There’s a lot of learning that goes into it. But luckily, being an athlete, I think it was a bit easier for me than it would be for someone who wasn’t.

Did any of the other actors get advice from you on that? I know Stephen Amell did plenty of physical stuff when he was on Arrow…

Harrison: He jumped off a ring and landed wrong. So he actually got a compression fracture in his spine and was out for six weeks.

And you hurt your knee, right?

Harrison: Yeah, I got a compression tear in my knee. It was the first time I flipped out of the ring and I didn’t put any bend into my knee so I landed straight-legged.

On the acting side, Apocalypse has kind of a different backstory than the other characters. How much of that did you work on yourself or with the writers? Do you know his whole story?

Harrison: No, we don’t know his whole story. The story of Apocalypse is what they want it to be. I had no input into that. This is my first real, season-regular role so I’m coming in there trying to put on screen what he’s putting on paper and he’s helping me to do that. Pete directing, Mike O’Malley the showrunner, and Michael Waldron the writer, they did a great job of helping me make Apocalypse come to life.

Do you know Apocalypse’s real name?

Harrison: Hey, you know what’s crazy? I do not. It’s “James Harrison.”

Another thing that’s different about Apocalypse is that he doesn’t appear to have aspirations for bigger success. Or he’s already had that success, so it’s not as big a deal to him.

Harrison: No, he doesn’t have aspirations to do anything more than what he’s already done. I think that comes from him being in wrestling for the last two decades or so and having such loyalty to the DWL and to the Spade family. He’s a recovering alcoholic and they stuck with him through his stint in rehab, and they brought him back after that.

Since you mentioned that, in Episode 6, you have some scenes that get into that history. We see Apocalypse leading a regular AA meeting, we learn more about your character. Was that all from the writers or did you do your own research on that?

Harrison: No, that’s the writers. I went into what I felt like it would sound like if I was someone that actually had to be in that situation where I was exposing myself to a group of people, trying to get them to understand and learn from my experiences and better themselves.

We also see in that episode and later on, you might be the funniest character on the show. You get a lot of one-liners and quips to end scenes. I assume it was written that way. But were there a lot of takes to get those moments right?

Harrison: Mike is really good at throwing in one-liners, a lot of things that are not in the show. Like you said, you do a take, try this line and that line, different stuff. And he’ll be on the side saying, “Hey, cut in. OK, go.” It’s great.

Is that something you settled into or it got easier with the more takes you did?

Harrison: I’ve become real close with Allen Maldonado, he plays Rooster. He and I hung out a lot, so I did a lot of practicing with him even with stuff where he wasn’t in there. He’s known Mike all the way back to Survivor’s Remorse. So he let me know beforehand, “Hey, listen – don’t get worried but this is gonna happen.” So I was kind of prepared for it, to go ahead and spit it out and make it come to life. I have fun with it now.

So you and Allen, that’s the closest friendship you took from this?

Harrison: No question about it. He’s a good dude. He’s really helped me through this course, through this journey, and exposed me to the game and got me to understand how things are done, what way you should do them. He helped me if I wanted to go over lines, if I wanted to figure out what this meant, the lingo of looking at a schedule and so forth.

Your character’s also a locker room mentor. I know you’ve been saying it’s all on the page, but was that different from your own experiences in a football locker room? Did you have that role?

Harrison: Right. That was easy to portray, because you take situations from the NFL and Steelers and try to help and guide them through the understanding of the business, how things work, what you need to do.

But what you see there is what they put on paper. We did a lot of practicing with each other, you know, in those scenes. That’s probably why it looks so natural and so real.

Also along those lines, there really seemed to be a family atmosphere in scenes with the DWL crew. That really came across on camera. I thought that was one of the most enjoyable parts of the show, like “Oh, these guys really look like they get along with each other.” Did that develop naturally?

Harrison: You know, we shot this during quarantine and I think that really helped. That was a good thing for us. We could only work out of one place, they made a gym for us. We all worked out together, we did everything together. The only thing we didn’t do together was sleep in the same apartment.

When it came down to it, you couldn’t hang out with anybody else. Everybody’s gotta be cleared. So we hung out together. We couldn’t go out with other people because you had a protocol that you had to stick to. 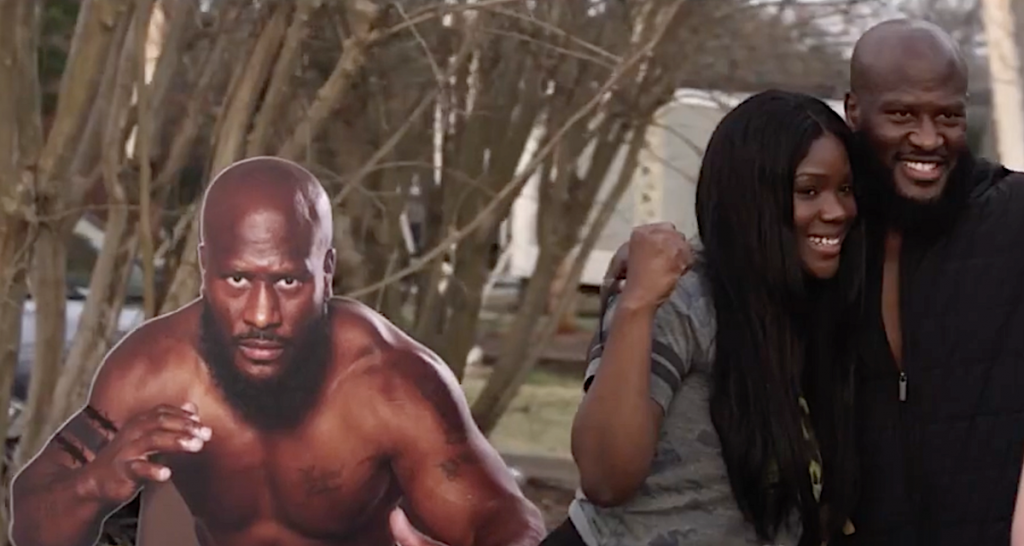 Did you get to keep that cardboard cutout of yourself as Apocalypse?

Harrison: No, I don’t have it. Listen, that cardboard cutout is so damn short. Look at the film and look at me standing next to it. It got me looking like I’m the size of Allen Maldonado. (Make sure you put that in there!)

Heels airs Sunday nights at 9 p.m. ET on Starz. Episodes are also available on the Starz app, Starz on-demand, and on Starz.com.