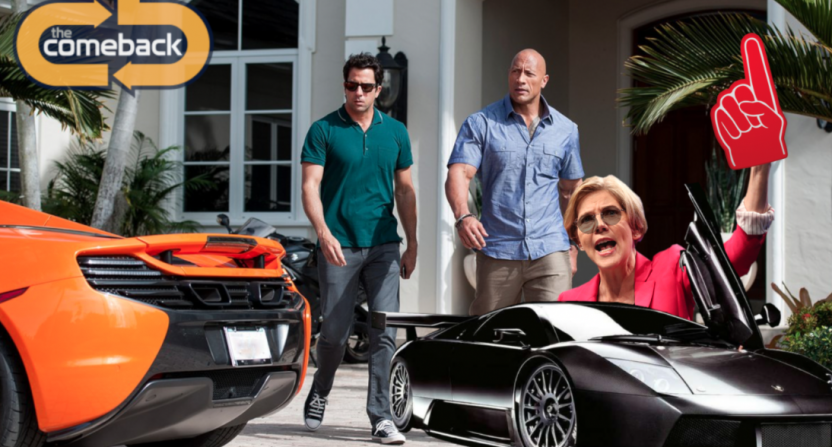 Trust me, this is probably a story I never thought I would be writing.

Elizabeth Warren is a Senator from Massachusetts. She is well known for her progressive views and many Democrats feel that she should run for President. She normally wouldn’t be the type of person who would watch a TV show about the things NFL players get into after retiring from football but I’ve also learned from an early age to never judge a book by its cover.

So here we are.

In a Facebook post supporting the Writers Guild and their ongoing negotiations with various Hollywood studios, Senator Warren talked about where Hollywood and its studios would be without the writers and dropped the detail that she and her husband Bruce, love Ballers. Yes, the show featuring Dwayne “The Rock” Johnson.

Despite the shocking revelation, it shouldn’t distract from Warren’s original point. The Writers Guild has been in negotiation and there had been the possibility of a strike. If you remember, there was a writers strike about 10 years ago because of a negotiation on DVD and streaming residuals. They went on strike for over three months and as a result, caused TV shows and movies to stop production during that time. And considering screenwriters are typically freelance and do not get the massive pay some top actors get, it may be a bit tough to live in Los Angeles on a screenwriters salary. It can be done but one could at least see their side of the argument in wanting a bigger piece of the pie.

This isn’t to knock Senator Warren for her TV choices. Although Ballers isn’t exactly my cup of tea, it’s great for at least a few million people. It’s just that if people were to guess what TV show Elizabeth Warren would be watching, Ballers may not be their first guess, or maybe their 50th guess. Either way, the wait is almost over for the Senator. Season three of Ballers premieres July 23.