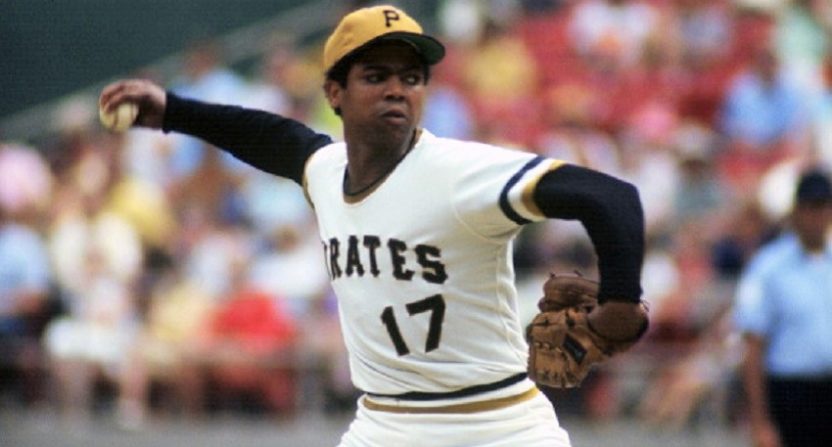 Three years ago, a documentary about former major league pitcher Dock Ellis reminded us of what a compelling story, what a trip his 12-year baseball career was. Now, the hurler’s story has a chance to reach an even wider audience with a feature film. Dock is getting a biopic, with the announcement made on the 47th anniversary of him pitching a no-hitter for the Pittsburgh Pirates.

As reported by Deadline’s Anita Busch, the movie will be titled Dock and O’Shea Jackson (Straight Outta Compton) is attached to star as Ellis. Jackson is the son of rapper Ice Cube and played his father in the biopic about famed hip hop group N.W.A. The resemblance between son and father added a layer of authenticity and wonder to the performance. Obviously, that same emotional connection won’t be there for portraying Dock Ellis, but in looking at old photos, there is a physical resemblance between the actor and pitcher.

Ellis threw a no-hitter against the San Diego Padres on June 12, 1970. But what made that performance more notable is the revelation 14 years later that Ellis had pitched that game while high on LSD. According to Ellis, a night of drinking and drugs left him unsure of what day it was. Not realizing he was supposed to pitch that night, Ellis took another hit of LSD around noon. But a friend informed him that he was indeed scheduled to pitch that night and took a flight from Los Angeles to San Diego, getting to the ballpark 90 minutes before gametime.

The no-hitter, along with Ellis’s MLB career and life after baseball (highlighted by counseling professional athletes dealing with drug and alcohol abuse), was recounted in a 2014 documentary titled No No: A Dockumentary.

A script has already been written for the film and Ice Cube is among the producers of the film. According to Deadline, the project is currently being shopped around to potential directors. Ellis’s son, Dock Ellis III, is also a consultant on the movie.

As recounted by Sports Illustrated’s Jon Tayler, the story of pitching while high on LSD (not to mention throwing a no-hitter) highlighted a career full of intriguing anecdotes and flamboyant behavior. Ellis once took the field during pregame warm-ups wearing hair curlers and had to be told by then-commissioner Bowie Kuhn that he was not allowed to do so. In a 1974 start against the Cincinnati Reds, Ellis intended to show he wasn’t intimidated by the Big Red Machine by hitting every batter in the lineup. (He made it through the first five batters in the order, plunking the first three.) In 1977, he set off the sprinkler system in the Oakland clubhouse by burning the pitching charts he was supposed to fill out during the game.

During his 12-year MLB career, Ellis compiled a 138-119 record and 3.46 ERA in 345 games (317 starts). Nine of his major league seasons were spent with the Pirates, but Ellis also pitched for the Rangers, Yankees, Mets and Athletics. He was the starting pitcher for the National League in the 1971 All-Star Game, and finished that season fourth in NL Cy Young Award voting with a record of 19-9 and a 3.06 ERA. Ellis passed away in 2008.