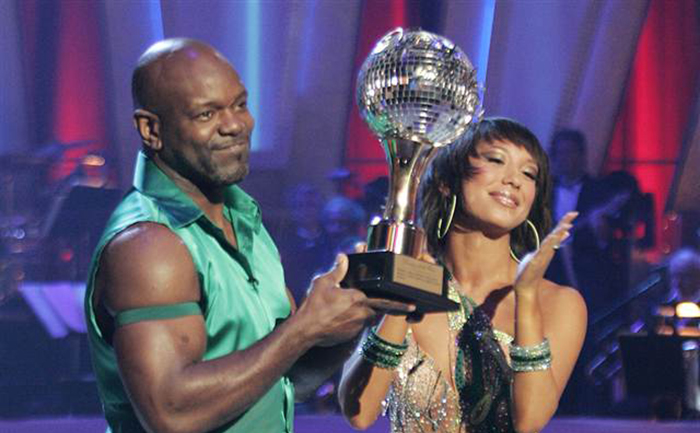 Dancing With The Stars officially announced its season 22 lineup Tuesday morning (even though everyone already knew who was going to be on it) and, as usual, it’s loaded with professional athletes. Denver Broncos linebacker and Super Bowl MVP Von Miller, Pittsburgh Steelers wide receiver Antonio Brown, former NFL quarterback Doug Flutie, and UFC fighter Paige VanZant will rep the sporty side of dancing contestants, alongside names like Mischa Barton, Jodie Sweetin, and Geraldo Rivera.

You would think that athletes are at a distinct advantage when it comes to a show like this, especially those still in the midst of their professional careers. But while it’s true that athletes have gone on to win a decent number of Mirrorball Trophies, there are equally as many sports-related dancers who have spun out early. (Some were even the first contestant eliminated from competition.)

From boxer Evander Holyfield way back in season one to Triple Crown jockey Victor Espinoza in season 21, who was the very best and who was the very worst? That’s what we’re here to determine. Along the way, you’ll probably learn two things:

1) Antonio Brown has to be the favorite amongst the sports stars this season, simply because Steelers players, wide receivers, and specifically Steelers wide receivers have performed well in the past.

2) If any of these athletes get the Cha-Cha as their first dance, say goodbye.

A quick note: we’re working only with dancers who are known as being athletes first and foremost. Some contestants participated in athletics, but were known chiefly for other endeavors and thus not included. The same goes for people who work in sports, but were not known as athletes themselves. (Hi, Kenny Mayne.)

With that, let’s take a look back at every athlete who has participated on Dancing With the Stars:

Jones’ performance was cringe-worthy, full of mistakes, and generally weird. Watching it, you’ll probably have the same confused look on your face that she did. It was hard to tell if she didn’t care or just gave up immediately.

Nyad’s accomplishment of swimming from Cuba to Florida without the aid of a shark cage is impressive and deserving of high praise.

Her cha-cha was… not.

It’s not that Metta wasn’t trying. It’s just that he had absolutely no moves.

A lot of athletes have been the first person eliminated in a given season, but we’ve put Keyshawn so low because compared to every other wide receiver who has ever been on the show, his performance is so out of step (literally) that it calls many things into question. He was also kind of a jerk to partner Sharna Burgess.

Out of step and constantly looking to her partner for reassurance, Martina never stood a chance.

Avery was on during the same season as Diane Nyad. Otherwise, he probably would have gone home first. He resembles a spotter following his partner around the dance floor, waiting emotionlessly to catch her at each turn.

Seles was able to serve up the technical aspects of dance easily, but the sensual performance aspect was out of her reach.

How does a guy who finished in sixth place end up so low? Because there were only six contestants that year. Evander’s got some moves but most of the time, he’s just standing there while his partner dances.

Hamill looked beautiful and still had a lot of the same grace that led her to ice skating gold, but it was less like dancing and more like a gymnastics floor routine.

Couture has taken on some of the most vicious, powerful opponents in the world, but he was no match for the Paso Doble.

Sugar Ray was a lot of pomp and circumstance, with not a whole lot of actual dancing.

Liddell actually lasted a while (Season 9 featured 16 contestants). He’s inoffensive as a dancer, but also has a case of Stand There And Let Your Partner Make You Look Good-itis.

It’s been one disappointment after another for Sam since leaving Missouri and his performance here was the same. He brought the enthusiasm but his footwork needed a lot of work.

Continue on the next page…