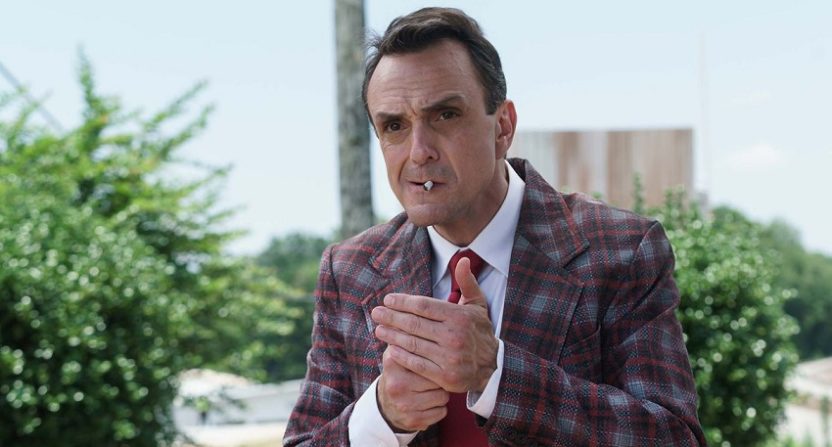 Baseball comedy Brockmire concluded its first season last week, closing out one of the pleasant TV surprises of 2017. Not much was known about the IFC series, other than its premise of a renowned baseball broadcaster who was admired by his peers in the industry, but also had some personal foibles and feuds with colleagues that aren’t typically associated with the great voices of the game.

But Brockmire wasn’t just a one-joke comedy. It turned out to be so much more than a series which depicted what a golden-toned broadcaster might be like in his personal life, and what that could turn into after obliterating his livelihood and reputation by sharing his pain and humiliation on the air. Star Hank Azaria, writer Joel Church-Cooper and director Tim Kirkby expanded the world around Jim Brockmire far beyond that initial premise into something familiar, yet hilariously absurd.

What truly made Brockmire stand out is its willingness to get raunchy and take advantage of IFC’s place deep into the basic cable listings by pushing the boundaries of what is typically expected from a comedy that’s not on a premium network like HBO or Showtime that doesn’t have to worry about censors. This show was crass and not afraid to be bold and dirty, as seen in this collection of clips we compiled.

Yes, Brockmire is about baseball. But it’s also about so much more, such as the joy of the unexpected. (And that doesn’t just apply to getting a finger up the keister.) The characters who populate Morristown, Pennsylvania and work or play for the local minor-league Frackers are reinventing themselves, striving for more, finding their identities, and enjoying the comfort that comes with knowing who they are.

That applies to the people who live outside Morristown as well, such as some of your favorite baseball broadcasters and writers like Joe Buck, Brian Kenny, Tim Kurkjian and Jonah Keri. What are those guys like among their peers with a little booze in them?

A first season of eight episodes didn’t seem like enough, though writer Church-Cooper, along with Azaria and co-star Amanda Peet, created a surprisingly tough emotional ending that probably needs some space to breathe as you realize how much you care about these people and their story. The argument could certainly be made that one of the many reasons Brockmire was appealing is that it didn’t overstay its welcome, keeping its initial run short and sweet, making sure each episode was strong.

But the show was also just damn funny, often going where you surely never expected it would go. Keep it Brockmire until that second season premieres (probably next spring) on IFC.