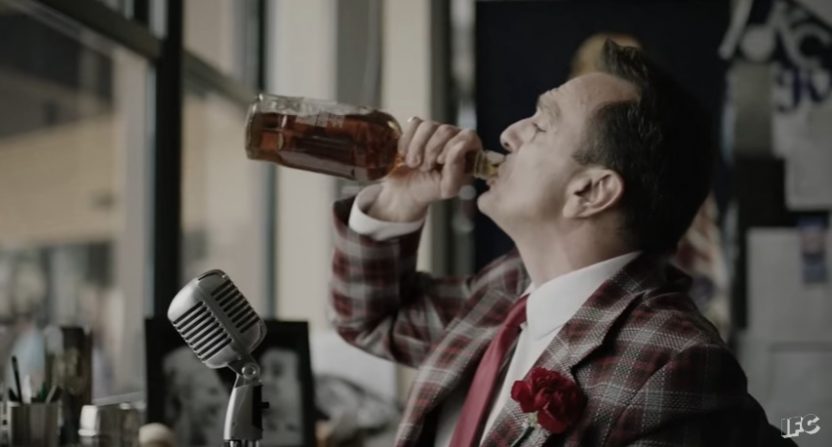 Here is a TV comedy that we here at Awful Announcing can truly get behind. As viewers and fans, we constantly scrutinize the work of announcers and broadcasters. We look for gaffes and maybe some embarrassing episodes outside of the booth, whether in pop culture or civilian life. But outside of interviews, we generally don’t know what these people are like because we see them at work.

So what about a TV series following a washed-up baseball announcer trying to get back to the major leagues after losing his job due to an inappropriate, drunken tirade on the air? That’s the premise of IFC’s new show Brockmire, starring Hank Azaria as the title character. The story begins 10 years after Jim Brockmire’s televised meltdown (spurred by finding out his wife was having an affair), as he’s trying to restart his career with a minor league team named the Morristown Frackers. Amanda Peet co-stars as the Frackers’ owner.

Here is a trailer for the series:

Brockmire originally began as a Funny Or Die short and is the first series produced under the company’s partnership with AMC Networks.

The comedy aims to add some authenticity with cameo appearances and storylines involving actual broadcasters like Joe Buck. Brockmire and Buck apparently have a years-long feud that’s a subplot of the show’s first season. Here’s a clip, which should satisfy any desires you may have had to hear Buck call someone filthy names. (C’mon, you’ve always been curious…)

Other baseball broadcasters and writers who will appear on Brockmire include MLB Network’s Brian Kenny, ESPN’s Tim Kurkjian and CBS Sports’ Jonah Keri.

Azaria appeared on The Tony Kornheiser Show last week to promote the show. He talks about Brockmire, inspirations for the character, the basic premise of a golden-toned broadcaster talking that way in everyday life, and Jim Brockmire’s feud with Joe Buck at the 30:55 mark of the podcast.