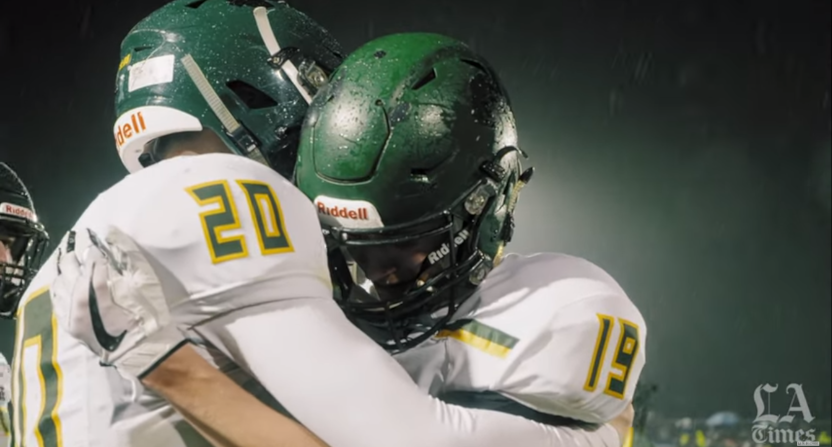 There’s another interesting sports movie coming down the pipeline. Mia Galuppo wrote this week at The Hollywood Reporter that 101 Studios is developing a movie based on Los Angeles Times columnist Bill Plaschke’s non-fiction book Paradise Found, covering the story of the Paradise High Bobcats’ football team and head coach Rick Prinz after much of their town of Paradise, CA burned down in the November 2018 Camp Fire (which killed 85 people). The project will be produced by Mark Ciardi, with David Glasser, David Hutkin and Bob Yari attached as executive producers. Here’s more from Galuppo’s piece:

Prinz said in a statement: “11/8/18 at 8:34 AM I sent this text message to the football team — ‘the plan is to practice at 3:00 today. If it is too smoky, we will modify our activity. I will keep you informed if anything changes.’ 11 minutes later, we were running for our lives. These young men had faced the reality of death. They had lost everything, their possessions, their homes, their town. They were living with relatives, in hotels, trailers, and cars. Some were homeless. I could see the anguish and despair in their eyes. We didn’t have a school, we didn’t have a practice field, we didn’t have cleats, we didn’t even have a football. But we had each other.”Added Plaschke, who will consult on the film: “Imagine a small-town-football-team story that begins with no town and no team. The rebirth of the Paradise High Bobcats in the wake of a fire that decimated their small mountain village is a tale of 39 displaced kids and their coaches fighting together to overcome tragedy, forge a family, dominate a season, and bond a broken community.”“The Camp Fire in Paradise, California, last year completely devastated the homes and lives of the people who lived there, but we are honored to shine a light on the inspirational reporting and storytelling by Bill Plaschke of this remarkable community, and high school football team, rebuilding their lives,” said Glasser, with Ciardi adding, “A year ago, the town of Paradise endured its complete destruction, due to the deadliest wild fire in California history. Its football team has helped it rebuild literally from the ashes, and given hope where little existed. I’m not sure I’ve ever seen a story with this much emotion in it.”

Ciardi is an interesting figure attached to this, as he’s not only a former professional athlete (he pitched for the Milwaukee Brewers in 1987, but retired the next year thanks to a shoulder injury), but also a producer on a whole lot of prominent movies, many of which focus on sports. That list includes The Rookie (2002), Miracle (2004), Invincible (2006), The Game Plan (2007), Secretariat (2010), Million-Dollar Arm (2014), The Miracle Season (2018), and the upcoming The Way Back (2020). So he certainly has plenty of experience in the sports movie field.And Plaschke has been covering the team in person frequently since this happened, both for the book and for the Times. So this is certainly based on strong details, and on details recorded at the time rather than after the fact. Here’s some of what Plaschke wrote about the Bobcats’ upcoming season in June:

They lost so much, but they still have their coach, the venerable Rick Prinz, a 60-year-old with a quiet stare and a white goatee. He has 30 years invested in the school, 20 as the head coach, and last season was going to be his finale. He was going to retire, but that plan literally went up in flames. The fire was still burning when he decided to stick around because that’s what leaders do.“Now that we’ve had this catastrophe, I can’t walk away, I can’t just leave the kids like this,’’ Prinz says. “I feel like I have a responsibility to help our school and the football program get back on its feet, whatever that’s going to take, I’ve got to try to do it.’’Considering Paradise is such a tradition-deep football town, it might have been more shocking if they had quit. On Friday nights when the Bobcats play at home, the Sierra foothills village virtually shuts down, several thousand of the formerly 25,000 residents filling Om Wraith Field.…The players enter the stadium by walking down through the packed stands. They have traditionally been accompanied by the school marching band’s rendition of a song that now has new meaning — Johnny Cash’s “God’s Gonna Cut You Down.’’ The concession stand sells a Prinz Dog. The Bobcats usually win.“It’s like something out of a movie,’’ Prinz says.

Well, now it seems like it’s going to be something in a movie. This project is still in the early stages, but it’s interesting to hear that it’s being developed, and there’s obviously quite the story to be told here.[The Hollywood Reporter; top screengrab is from a Los Angeles Times video on the team’s 2019 season, accompanying Plaschke’s final column on it. Don’t look at the video or the column if you don’t want spoilers on how the season goes!]