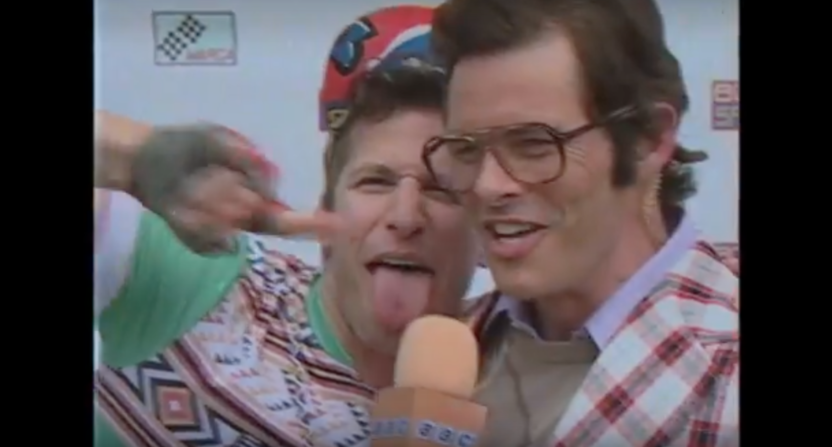 Two years ago, Andy Samberg and HBO broke the tape on sports mockumentaries with the tennis spoof, 7 Days in Hell. (Please check out Jeremy Klumpp’s review of the comedy.) Directed by Jake Szymanski and written by Murray Miller, Samberg co-starred with Kit Harington as rival tennis players who faced off in “the greatest match in tennis history” at Wimbledon.

The team is back together for HBO’s latest sports mockumentary, titled Tour de Pharmacy. The comedy spoofs the 1982 Tour de France, during which nearly every single participant in the race was doping. Much like 7 Days in Hell was timed to coincide with the actual Wimbledon tournament, so will Tour de Pharmacy be released near the beginning of cycling’s most prominent event.

HBO released the first trailer for the mockumentary on Friday. Take a look:

Casting John Cena and Dolph Lundgren in a comedy about cyclists taking steroids is a clever touch. We’re not implying anything about those two. It’s just that they don’t have the lean build of typical cyclists, especially the hulking Cena.

Orlando Bloom co-stars as a rival cyclist, but Tour de Pharmacy has a loaded ensemble which includes Freddie Highmore, Jeff Goldblum, Danny Glover, Julia Ormond, James Marsden, Kevin Bacon, Nathan Fielder, Mike Tyson, Will Forte and Maya Rudolph, among many others. In that regard, at least, Tour de Pharmacy promises to be better than 7 Days in Hell. Besides, cycling seems so much more open to parody and ridicule, given the history of PED use in the sport. (Though tennis probably has far more prima donnas.)

As you saw in the trailer, Lance Armstrong also makes an appearance in the film as a whistleblower whose identity is supposed to be obscured by the documentary filmmakers. Are we as a culture now in a place where Armstrong can comfortably joke about doping when he lied and threatened people in denial for so many years? Maybe it’s good that Armstrong can poke fun at himself, but he still has the stink of scandal on him. Too soon, Andy Samberg!

If you’ve never seen 7 Days in Hell, here’s the trailer for the first sports mockumentary collaboration between Samberg and HBO.

As was the case with 7 Days in Hell, Tour de Pharmacy will run approximately 45 minutes, essentially an extended version of the digital shorts we’re familiar with from Samberg and The Lonely Island. After all, it’s supposed to be a sports documentary, most of which are one hour long. A successful mockumentary will spoof the form correctly.

Tour de Pharmacy debuts July 8 on HBO and can also be seen on HBO Now, HBO GO and HBO On Demand.