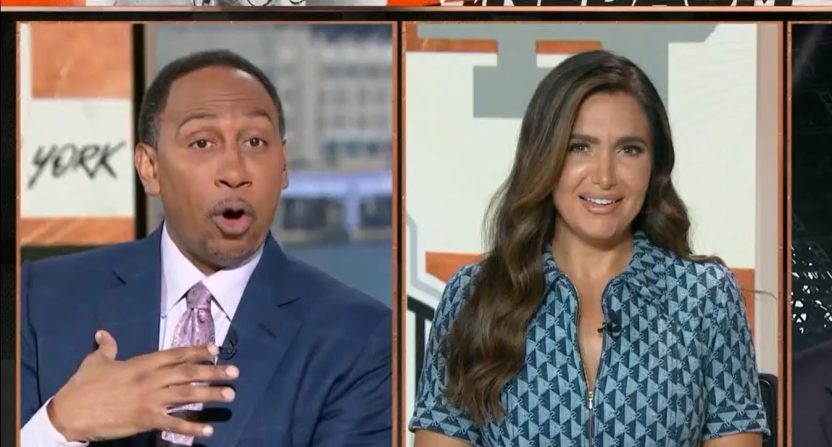 Stephen A. Smith’s second tenure with ESPN recently surpassed its 10-year anniversary. And signaling possible boredom, Smith is flirting with bigger and bolder career goals, like running for president.

One week after claiming he would “strongly consider” running for President of the United States while appearing on Paul Finebaum’s radio show, Smith was given the opportunity to temper all of the aggregated headlines. But instead, with Finebaum appearing on First Take Tuesday morning, Smith doubled down on his presidential interest.

“I said, ‘if the American people wanted me to run for the presidency of the United States of America, I would strongly consider it’ And damnit I mean it!” Smith declared. “Listen, it ain’t that big of a standard, I mean let’s call it what it is. I think I got a shot!”

Proving he’s more than ready for a political campaign, the First Take host formed a loose fist, firmly pressed his thumb firmly on the center of his index finger, and stated, “My name is Stephen A. Smith and I approve this message.”

“I know this much,” Smith added. “I wouldn’t lose a debate.”

It’s almost like Smith is taunting Skip Bayless to run against him. While there’s no telling how Smith would fare in the mess of an election campaign, his political debates would certainly be must-see television, win or lose.

At 54 years old, with an ESPN contract set to run through 2025, maybe Smith is getting a little bored with sports. He’s already touted outside interests in late-night television, news, and politics. At some point, Smith might feel as though he’s exhausted everything he can out of yelling about sports. Howard Stern feeds his outside interests with painting and photography, others may choose culinary arts or woodworking. Smith might just be seeking a different path, President of the United States.

According to Smith, he was already approached by former Pennsylvania Governor Ed Rendell about a run for Senate earlier in his career. Smith opted to continue his sportscasting career and returned to ESPN for a second tenure. But if someone approaches the First Take host again and ups the ante from Senate to President, it might offer just enough of an ego-serving opportunity to pique Smith’s interest.