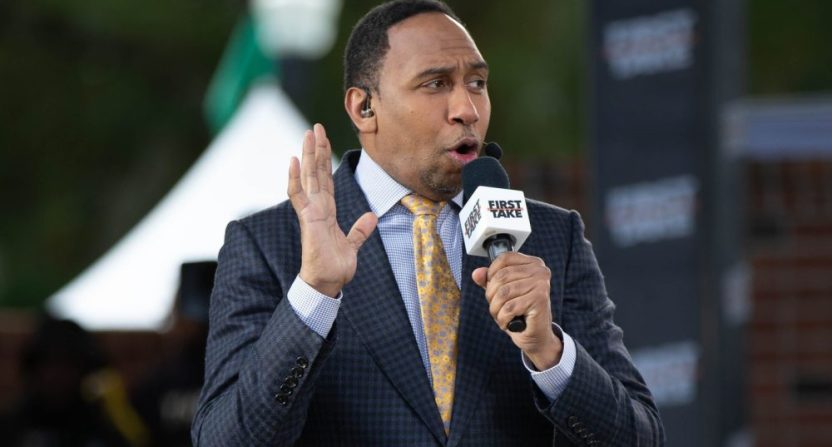 There’s already precedent for sports personalities running for office and TV stars becoming president. So why not Stephen A. Smith?

Smith joined Paul Finebaum’s radio show Tuesday, where he promoted his forthcoming book Straight Shooter: A Memoir of Second Chances and First Takes. During the interview, Finebaum asked Smith if he would ever consider running for president, and the face of ESPN offered a very presidential response.

Could the next President of the United States be…@stephenasmith??? pic.twitter.com/fmcwHqq1z9

“If I thought I could win, yeah,” Smith stated. “I would have told you ‘Hell no, no way in hell’ years ago. I was a father out of wedlock. Obviously when you think about the standards that were once held in the White House, I’m pretty damn good. But I’m not perfect, and those imperfections obviously would be highlighted.”

A lot of those imperfections are expected to be revealed in Smith’s memoir which is set to be released in Jan. 2023. Smith has acknowledged he didn’t hold back in the book, which is one of the reasons why he waited until after his mother passed away to write it. Despite those imperfections, Smith would still consider a run for president.

“If enough people came to me and said ‘Stephen A., you have a legitimate shot to win the presidency of the United States of America,’ I would strongly, strongly consider running,” Smith continued. “Because I know this much, I know two things would happen: I would know how to act, number one. And number two, I would think about America. Of course I’m a Black man so I would think about the Black community. But I have always prided myself and said, I’m not just about Black appeal, I’m about mass appeal. Everybody in America would matter. Whatever it took to make this country better, is what I would do from the bottom of my heart.”

Smith recently revealed he was approached by former Pennsylvania Governor Ed Rendell about a run for Senate earlier in his career. He ultimately declined and returned to ESPN where he experienced a career resurgence. But Smith’s popularity and influence has only increased since Rendell saw political promise in Smith. Who’s to say someone can’t share Rendell’s foresight about Smith, only with the end goal of president instead of senator? His debates would certainly be interesting.

It’s interesting to hear Smith float the idea of running for president as he’s beginning to promote his first book. Howard Stern has claimed Donald Trump’s presidential campaign was spawned off a publicity stunt. Trump first floated the idea of running for president while promoting a book and his ultimate run for office in 2016 occurred as he was looking to negotiate a new deal with NBC for The Apprentice.

Now, Smith is promoting his book and sharing an interest in running for president, not that anyone is taking it too seriously. But stranger things have happened, and more surprising candidates have been elected president.